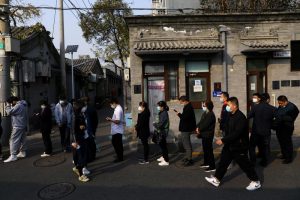 FILE PHOTO: People line up outside a vaccination site after the city started offering booster shots of the vaccine against the coronavirus disease (COVID-19) to vaccinated residents, in Beijing, China October 29, 2021. REUTERS/Tingshu Wang/File Photo

BEIJING (Reuters) – China detected 91 domestically transmitted COVID-19 cases with confirmed symptoms for Tuesday, marking the highest daily count since Nov. 2 and a significant jump from 21 cases a day earlier, as the country fights a fresh outbreak in the north.

All of the 91 local symptomatic cases were reported in the northern Chinese region of Inner Mongolia, data from the National Health Commission showed on Wednesday.

Inner Mongolia reported a total of 132 local symptomatic cases during the Nov.28-30 period, more than 70% of them in Manzhouli, a small city next to the border with Russia.

Although the number is low compared with many outbreaks outside China, Manzhouli has quickly banned residents from leaving town, halted some non-containerised imports by rail and closed a flurry of public venues, as Beijing sticks with its zero tolerance approach towards letting infections spread.

The latest resurgence in cases comes only a few weeks after Inner Mongolia contained a cluster that was part of China’s biggest Delta outbreak between mid-October and mid-November.

As of Nov. 30, mainland China had confirmed 98,824 symptomatic cases, including both local ones and those arriving from abroad. The death toll remained unchanged at 4,636.