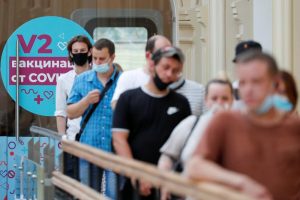 FILE PHOTO: People line up to receive vaccine against the coronavirus disease (COVID-19) outside a vaccination centre in the State Department Store, GUM, in central Moscow, Russia June 25, 2021. REUTERS/Shamil Zhumatov

MOSCOW (Reuters) – The Kremlin on Monday implored people to get vaccinated against COVID-19, calling it the only way to stop the virus’ spread, as Russian authorities mulled reintroducing health restrictions to cope with daily cases rising to their highest levels since January.

Moscow may soon bring back incentives such as prize drawings for people to get vaccinated, Mayor Sergei Sobyanin said, as authorities struggle to contain a wave of cases and deaths. The 25,781 new infections reported nationwide on Monday was the most since Jan. 2.

“The vaccination rate, despite the complete preparedness of all infrastructure, leaves much to be desired,” Kremlin spokesperson Dmitry Peskov told reporters on Monday.

Vaccine hesitancy has hampered Russia’s inoculation drive. Russians often cite a general fear of new medical products and distrust of the authorities as their reason for refusing the vaccination.

Authorities relaxed many restrictions after Russia overcame the worst of a third wave of the virus in the summer, but the daily number of coronavirus-related deaths, which stood at 883 on Monday, has remained high and regularly reaches a record single-day rise.

Now, with cases also rising sharply, which Sobyanin said was a cause for concern, restrictions look set to return, although multiple officials have said that lockdowns are not being considered.

Some regions are planning to force people to show proof of vaccination, a recent negative test, or evidence of immunity before visiting places like cinemas and gyms.

The regional government in Kaliningrad, Russia’s European exclave, said on Monday that measure would extend to restaurants and cafes from Oct. 8.