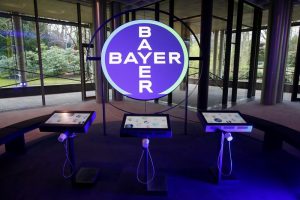 MILAN (Reuters) – A Milan judge on Tuesday indicted the Italian units of Novartis and Bayer on charges of operating a scheme to cheat the regional public health service in Lombardy, legal and judicial sources said.

FILE PHOTO: The logo of Bayer AG is seen in a showroom of the German drugmaker where the annual results news conference takes place in Leverkusen, Germany February 27, 2020. REUTERS/Wolfgang Rattay/File Photo

The charges revolve around allegations that the companies sold drugs to hospitals at inflated prices as part of a scheme whereby the hospitals then fraudulently obtained funds from the regional government.

The judge also accepted a settlement request by five hospitals belonging to the San Donato Group, one of Europe’s largest private hospital groups, over their alleged involvement in the scheme, the sources said.

San Donato – Italy’s largest private healthcare group with 19 hospitals, more than 16,000 employees and 4.7 million patients each year – has already paid a total of 32 million euros in damages to Lombardy authorities.

The hospitals, including the renowned San Raffaele Institute in Milan, were accused of claiming reimbursement for drugs obtained from Novartis and Bayer between 2013 and 2018 in a fraudulent way, prosecutors’ documents showed.

The prosecutors alleged that the hospitals charged the regional health service the full price for drugs which they had obtained at a lower price thanks to credit notes issued by the pharmaceutical companies, the documents said.

According to the prosecutors, Novartis and Bayer benefited from the scheme by offering the credit notes to San Donato on condition that the healthcare group made large purchase orders.

Bayer declined to comment on the matter on Tuesday, while Novartis said it acknowledged the judge’s decision “with regret” and denied any wrongdoing in the case.

Novartis said it had always carried out transparent commercial relations with the San Donato Group, similar to those with other public and private health companies, in line with the company’s policy and in full respect of current laws.

In September, a Milan judge seized 2.3 million euros from Novartis in relation to the investigation.

The trial will start on July 14 in Milan and will also include eight individuals, including a former executive and consultant for San Donato, a Bayer sales manager, a Novartis manager and two executives and a former employee of the Italian unit of pharmaceutical group Mylan, the sources said.

Mylan itself settled the case by paying a 200,000 euro fine and agreeing to a confiscation of 1.2 million euros. Mylan declined to comment on the matter.

At the end of Tuesday’s closed-door hearing, Marco De Luca, the leading lawyer for San Donato, said the settlement reached with the healthcare group “seemed to be fair” as well as being the most useful outcome for everyone involved.

Settling a criminal case in Italy does not involve any admission of guilt or responsibility.

Under Italian law, companies are liable for any offences committed by their managers in their own interest.($1 = 0.8286 euros)