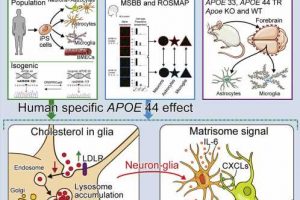 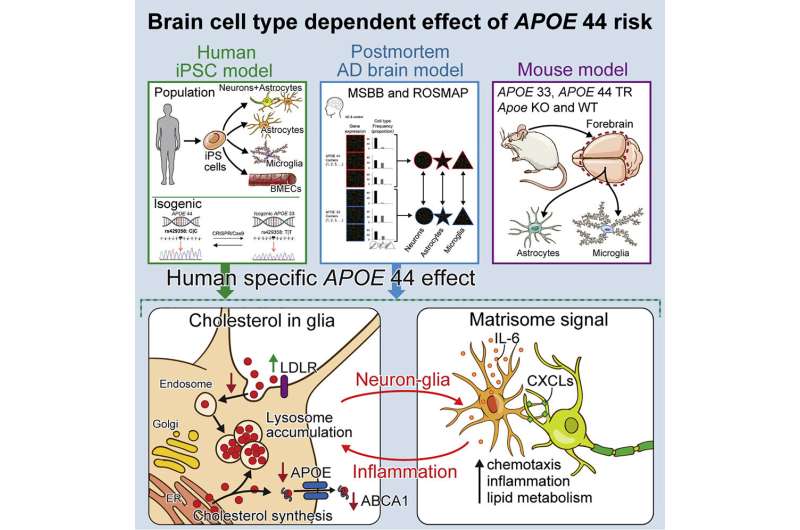 Alzheimer’s disease (AD) is a progressive neurodegenerative disorder and the most common cause of dementia, affecting more than 5.8 million individuals in the U.S. Scientists have discovered some genetic variants that increase the risk for developing Alzheimer’s; the most well-known of these for people over the age of 65 is the APOE ε4 allele. Although the association between APOE4 and increased AD risk is well-established, the mechanisms responsible for the underlying risk in human brain cell types has been unclear until now.

Researchers from Boston University School of Medicine (BUSM) have discovered two important novel aspects of the gene: 1) human genetic background inherited with APOE4 is unique to APOE4 patients and 2) the mechanistic defects due to APOE4 are unique to human cells.

“Our study demonstrated what the APOE4 gene does and which brain cells get affected the most in humans by comparing human and mouse models. These are important findings as we can find therapeutics if we understand how and where this risk gene is destroying our brain,” says corresponding author Julia TCW, Ph.D., assistant professor of pharmacology & experimental therapeutics at BUSM.

To investigate the effects of APOE4 on brain cell types, the researchers used three models, human induced pluripotent stem cells (hiPSCs), post-mortem human brains and experimental models. They used a population hiPSC model, comparing APOE4 (mutation) vs. APOE3 (mutation-free) of AD patients and normal people. For the second model, they compared AD brains against a control brain with different APOE genotypes. For the third model, they used an experimental model carrying human APOE genes. With all, they used genetic screening and RNA sequencing to identify human cell-type specific defects due to APOE4.

While this study is about the APOE4 gene using Alzheimer’s patient samples, it is also known that APOE4 is a risk for Parkinson’s disease (PD). According to TCW, this study has implications for any disease associated with APOE as risk such as AD and PD, or for any disease phenotype found similar to the one caused by APOE4, such as rare genetic diseases.