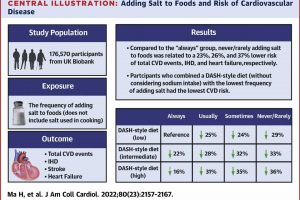 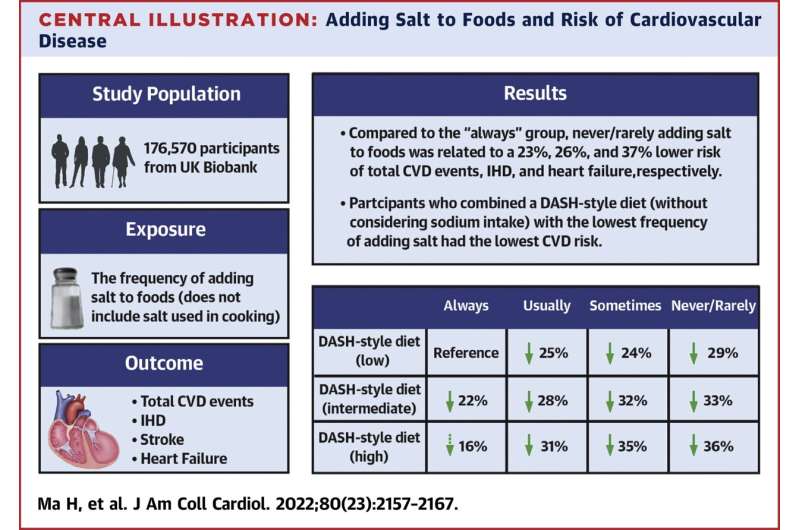 Adding additional salt to foods at a lower frequency is associated with a reduced risk of heart disease, heart failure and ischemic heart disease, according to a new study published today in the Journal of the American College of Cardiology. Even among those following a DASH-style diet, behavioral interventions to lessen salt consumption could further improve heart health.

There’s substantial evidence linking high sodium intake to high blood pressure, a major risk factor for cardiovascular disease. However, epidemiological studies investigating this link have produced conflicting results due to a lack of practical methods for assessing long-term dietary sodium intake. Recent studies suggest that the frequency at which an individual adds salt to their foods could be used to predict their individual sodium intake over time.

“Overall, we found that people who don’t shake on a little additional salt to their foods very often had a much lower risk of heart disease events, regardless of lifestyle factors and pre-existing disease,” said Lu Qi, MD, Ph.D., HCA Regents Distinguished Chair and professor at the School of Public Health and Tropical Medicine at Tulane University in New Orleans. “We also found that when patients combine a DASH diet with a low frequency of adding salt, they had the lowest heart disease risk. This is meaningful as reducing additional salt to food, not removing salt entirely, is an incredibly modifiable risk factor that we can hopefully encourage our patients to make without much sacrifice.”

The study used a questionnaire at baseline to collect data on the frequency of adding salt to foods, not including salt used in cooking. Participants were also asked if they had made any major changes to their diet in the last 5 years, as well as being asked to complete 1-5 rounds of 24-hour dietary recalls over a three-year period.

The DASH-style diet was developed to prevent hypertension by limiting consumption of red and processed meats and focusing on vegetables, fruit, whole grains, low-fat dairy, nuts, and legumes. While the DASH diet has yielded benefits in relation to reducing cardiovascular disease risk, a recent clinical trial found that combining the DASH diet with sodium reduction was more beneficial for certain cardiac biomarkers, including cardiac injury, strain, and inflammation. The researchers calculated a modified DASH score that did not consider sodium intake based on seven foods and nutrients that were emphasized or deemphasized in the DASH-style diet.

Data on heart disease events was collected through medical history and data on hospital admissions, questionnaire and death register data.

Overall, study participants with a lower frequency of adding salt to foods were more likely to be women; white; have a lower body mass index; more likely to have moderate alcohol consumption; less likely to be current smokers; and more physically active. They also had a higher prevalence of high blood pressure and chronic kidney disease, but a lower prevalence of cancer. These participants were also more likely to adhere to a DASH-style diet and consumed more fruits, vegetables, nuts and legumes, whole grains, low-fat dietary but less sugar-sweetened drinks or red/processed meats than those with a higher frequency of adding salt to foods.

The researchers found the association of adding salt to foods with heart disease risk was stronger in participants of lower socioeconomic status, as well as in current smokers. A higher modified DASH diet score was associated with lower risk of heart disease events.

In a related editorial comment, Sara Ghoneim, MD, a gastroenterology fellow at the University of Nebraska Medical Center, wrote that the study is promising, builds on previous reports, and alludes to the potential impact of long-term salt preferences on total cardiovascular risk.

“A major limitation of the study is the self-reported frequency of adding salt to foods and the enrollment of participants only from the UK, limiting generalizability to other populations with different eating behaviors,” Ghoneim said. “The findings of the present study are encouraging and are poised to expand our understanding of salt-related behavioral interventions on cardiovascular health.”

Journal information:
Journal of the American College of Cardiology