Stop feeling guilty for afternoon snacking – it’s good for you 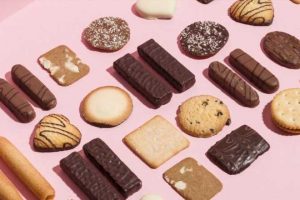 Don’t let the myth of the afternoon sugar crash make you feel guilty for your 4pm chocolate habit. This is why an afternoon snack is anything but bad…

Why does it feel shameful to admit that I have a sweet snack every afternoon? Sometimes, more than one. It can range from a few squares of chocolate to yoghurt and granola, from a fruity energy bar to a protein-based snack. More often than not, it comes immediately after lunch, but occasionally I don’t nibble on it until 4pm.

But in a world full of recipes that are designed to ‘keep you full until dinner’, snacking gets an unfair reputation of being a sign of greed or simply making poor food choices that haven’t nourished you enough.

In fact, it might be to do with the latter – but not in the way that you think. “Small portions have been normalised,” says nutritionist and dietician Isa Robinson. “If  you don’t eat very much for breakfast and lunch, particularly if you’re avoiding a food group, it’s no surprise that your hunger will catch up with you.”

And if you think that reaching for the biscuit tin is a sign of a ‘crash’ from a high-carb meal, it’s time for a re-think. “If you’re having a sugar crash then you need to be in the hospital because that’s what we see in diabetes,” Isa says. “I would be aware of anyone or anything that suggests that an afternoon snack is a sign of that because it’s just not true.

“However, we can balance our blood sugars and support energy levels by eating a range of food groups and consistently eating enough throughout the day.”

Even if your lunchtime plate is a great balance of protein, carbs and fat, your body can, and often will, still crave an afternoon snack. “A lot of people just need a pick-me-up in the afternoon. Our cortisol levels have a natural dip in the afternoon, which is why we sometimes get that lull. But afternoons are also pretty long: it’s been a couple of hours since lunch and it’s a couple of hours until dinner. It makes sense that you need something to eat,” says Isa.

The question now is, is reaching for a chocolate bar going to tide us over? “If a Twix is on your mind, no amount of cucumber and houmous is going to meet that need. It’s much better to be intentional with your decision to sit down and eat something,” says Isa.

This all plays into the psychology of eating, because food is rarely only ever just about our stomach. She points me to a small study by Harvard Univeristy that showed that when individuals with diabetes were told they were having a high-calorie, high-sugar drink, their blood sugar went up more than those who had the same drink but were told it was sugar-free.

“When we think something is bad for us we can induce negative effects in our body,” says Isa. “Worrying about what we eat can do us more harm than good, and the way we think and speak about food really matters. We should consider that more than whether there’s 3g more sugar in one thing than another.”

It goes without saying that there’s no such thing as ‘good’ and ‘bad’ foods. But if you are looking for a snack that is going to make you feel great in the afternoon, Isa has some tips.

As well as taking into consideration how hungry you are at the time of reaching for something, she says we should think about the ‘staying power’ of our foods. “For example, if you just need something to tie you over for an hour or so, then a bag of popcorn can be really helpful. But otherwise, I’d be cautious of ‘air foods’ like this, as they fill up the stomach but don’t offer much longevity,” Isa says.

Instead, opt for something that contains a combination of two or three macronutrients, as this will be more satiating. “Something that has both carbs and fat or fat and protein has much more staying power,” she explains.

And just to reiterate, anything can make you full, but it won’t necessarily make you satisfied if it isn’t answering ‘teeth hunger’ (aka what the mouth craves), as much as it is stomach hunger. But note that this is all under the umbrella of availability. No one is expecting you to be free to run to the shop for the specific brand of yoghurt you fancy, and there is no shame in ‘making do’ until you can get your hands on what you want.

Finally, Isa says it’s time to stop telling ourselves and others what we should and shouldn’t be eating. Goodbye to the ‘I shouldn’t be eating chocolate every day’ mindset, she says, because “when we start ‘should-ing’ all over ourselves we aren’t checking in with what we really need.”