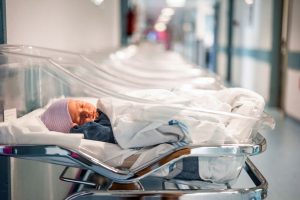 Three babies in China may have contracted the new coronavirus in the womb shortly before birth, according to two new reports.

However, experts say the evidence in these cases is inconclusive and does not prove the new coronavirus, SARS-CoV-2, can pass from mother to child during pregnancy.

In one report, doctors from Renmin Hospital of Wuhan University in Wuhan, China, describe the case of a woman who gave birth several weeks after she was hospitalized for COVID-19, the disease caused by the new coronavirus. The baby girl was delivered by cesarean section, and the mother wore an N95 mask and did not hold the infant, according to the report, published today (March 26) in the journal JAMA. The newborn was immediately quarantined, but showed no symptoms.

Two hours after birth, tests showed the baby had elevated levels of two types of antibodies against SARS-CoV-2. These antibodies are known as IgG and IgM. Although IgG antibodies are known to pass from mother to child during pregnancy, IgM antibodies are too large to cross the placenta, according to an editorial accompanying the report. Thus “detection in a newborn reasonably could be assumed to reflect fetal production following in utero infection,” the editorial said.

The infant also had increased levels of immune system chemicals called cytokines, as well as white blood cells, which can be signs of infection.

But critically, the baby repeatedly tested negative for the SARS-CoV-2 virus itself. This means it’s unclear if the baby was ever really infected with the virus, or if there could be another explanation for the positive IgM result.

In a second report, also published in JAMA on March 26, doctors from Zhongnan Hospital of Wuhan University analyzed blood samples from six newborns, looking for antibodies against SARS-CoV-2. They found five infants had elevated levels of IgG, and two infants had elevated levels of IgM, like the baby in the first report. But none of these infants tested positive for SARS-CoV-2.

One explanation besides SARS-CoV-2 infection could be that the mothers’ placentas were damaged or abnormal in some way, allowing IgM antibodies to pass through the placenta to the infants, the authors from  Zhongnan Hospital wrote.

It’s also important to note that IgM tests can be prone to both false positive and false negative results, and are not typically used to diagnose infections acquired in utero, according to the editorial.

“Although these two studies deserve careful evaluation, more definitive evidence is needed before the provocative findings they report can be used to counsel pregnant women that their fetuses are at risk from congenital infection with SARS-CoV-2,” the editorial concluded.

Earlier this month, a baby in London reportedly tested positive for SARS-CoV-2 minutes after being born to a mother with COVID-19, Live Science previously reported. However, in that case, it’s still unclear if the virus passed to the infant during or immediately after birth.

In addition, a preliminary study of nine pregnant women with COVID-19 found no evidence of SARS-CoV-2 passing from mother to child in the womb, Live Science previously reported.

The one-month trial gives you access to all of the educational site’s 9,000 activities in reading, science, math and art. Keep your child busy and learning while we are all stuck indoors.
View Deal