Home » Health News » $3 Billion in Cancer Drug Waste: Can It Be Salvaged?

$3 Billion in Cancer Drug Waste: Can It Be Salvaged? 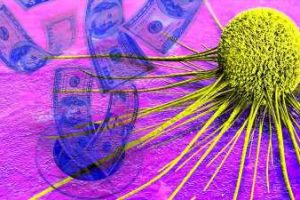 Three billion dollars: It’s enough to finance the annual out-of-pocket costs for 1 in 7 patients with cancer. It would cover almost half of the National Cancer Institute’s annual budget. And it could fund President Biden’s entire Cancer Moonshot program, with more than a billion to spare.

It’s also how much the United States spends on unused cancer drugs each year, some experts estimate.

Every year in the United States, hospitals and practices discard substantial quantities of expensive oncology drugs.

The reason boils down to inefficient drug packaging. Drug companies typically sell infused drugs in one or two single-dose vial sizes, but patients don’t come in such neat packages. A patient may need 300 mg of a drug that is only sold as 200 mg vials, which means half of a vial will go to waste.

Although most oncology drugs don’t incur substantial waste, even small volumes can translate to millions of dollars a year.

But can this money be saved or reallocated, if only we delivered drugs more efficiently?

“Attempts to recoup money for discarded drugs wouldn’t happen in a vacuum,” said Robin Yabroff, PhD, MBA, an epidemiologist and scientific vice president of Health Services Research at the American Cancer Society, who was part of a committee commissioned to evaluate the costs associated with discarded drugs.

The potential catch of any widespread effort to seek repayment or reduce the amount of discarded drugs, Yabroff and colleagues note, is that manufacturers would “simply increase the price of the vial.”

In other words, attempting to fix one problem may lead to another — essentially a whack-a-mole of cancer costs, which are projected to balloon to $246 billion by 2030.

What this means is without sweeping policies to rein in cancer care costs, oncologists can only do so much. And every little bit counts.

“We are left chipping away at this monster of cancer care costs,” said Adam Binder, MD, a medical oncologist at the Sidney Kimmel Cancer Center at Jefferson Health in Philadelphia.

Michal Sarfaty, MD, was excited when enfortumab vedotin came on the market to treat advanced urothelial cancer in late 2019.

The cost of the drug, however, tempered her enthusiasm.

Enfortumab vedotin is a “great drug,” said Sarfaty, an oncologist at the Sheba Medical Center, Ramat Gan, Israel. But it can cost upwards of $500,000 a year for an average-weight man.

Given the expense, Sarfaty wanted to understand how much of the drug gets thrown away. During a fellowship at Memorial Sloan Kettering (MSK) Cancer Center in New York City, Sarfaty explored the amount of unused enfortumab vedotin among the 64 patients who received the drug in 2020. She, along with a team at MSK, calculated the price tag of that waste and extrapolated those estimates for patients across the country.

Although waste occurred in almost half of administered doses (367 of 793), only a small volume got discarded — 2.9% per dose, on average.

Multiplying unused milligrams by the cost per milligram, Sarfaty and colleagues estimated that, for each patient, $3127 of the drug got discarded. When calculated over the year, the cost came to just over $200,000 at MSK, and nearly $15 million when projected across the approved patient population in the United States.

“Ultimately, we did not see a lot of waste with this specific drug,” Sarfaty said. “Under 2.9% is considered a reasonable amount, below the 3% threshold Peter Bach, MD, and colleagues recommend. But even with this small amount of waste, the cost per patient and to the system remains notable.”

The Problem With Recouping Drug Waste

Estimates from the Centers for Medicare & Medicaid Services (CMS), which tracks costs associated with discarded weight-based drugs covered under Medicare Part B, support the notion that small quantities of discarded drugs can still translate to big bucks.

Since 2017, CMS has required healthcare providers to report the volume of drugs discarded from a single-dose vial using a code, known as the JW modifier. The JW modifier means that providers can be reimbursed for the entire vial amount, not just the quantity the patient used.

In 2019, claims data from Medicare Part B showed that 1.85% of discarded rituximab came to $33.3 million. For infliximab, the 1.55% of discarded liquid translated to $15 million, and just 0.36% of discarded pembrolizumab reached $10 million.

However, experts question whether the JW modifier accurately reflects the quantity of drugs discarded.

According to the 2021 report from the National Academies of Sciences, Engineering, and Medicine (NASEM), most physicians don’t use the JW modifier. Among

The rate was significantly lower for private insurance. Of more than 4 million private insurance claims on 77 drugs made in 2017 and 2018, only 3.6% included the JW modifier; 15 of these drugs had no JW claims.

“Although we found that most physicians don’t use the JW modifier, even those who do, don’t use it consistently, even for the same patient,” said Yabroff, a co-author on the report.

Going a step further, Yabroff and colleagues argue that even if everyone used the JW modifier as intended, manufacturers would probably increase the price of drugs to compensate for any loss, potentially eliminating savings for payers.

That’s because, in the United States, manufacturers typically base drug prices on a patient and payers’ “willingness to pay for better health,” not on the volume of liquid used. Take a patient who pays $2000 to receive the dose they need. If that dose is 600 mg but requires using two vials of 400 mg, then “to the patient, the 600-mg dose is worth $2000, and the remainder has no value whatsoever,” the NASEM authors argue.

The authors parallel this scenario to purchasing a designer coat or dress. If that item requires alterations that remove a section of material, “the customer does not typically get a rebate because all the fabric was not needed,” the NASEM team writes.

But there’s a flaw in this rationale, argues Daniel Goldstein, MD, a medical oncologist at the Rabin Medical Center, Petah Tikva, Israel. A person’s willingness to pay for better health assumes that the price of a drug is based on proper market forces, where a drug’s cost and its effectiveness are in harmony.

“The problem is we’re operating in a broken market where the prices of oncology drugs have no real bearing on their efficacy,” said Goldstein.

And, as Bach noted in a 2021 Health Affairs piece, willingness to pay also requires that consumers know what they’re paying and allows them to walk away from an excessively high price.

But neither is a reality.

For one, Bach explains, companies may lowball the monthly price of a drug. In 2020, GlaxoSmithKline (GSK) announced that its new drug Blenrep would carry a list price of $8277 per vial, or about $23,900 per month for an average 79 kg (175 lb) patient. That price accounts for two vials of the drug. But, according to Bach, “what GSK left out is that 44% of US adults weigh more than 80 kg, and above that weight, three vials are needed per dose.” That would raise the average monthly cost to $30,479.

“Medicare can’t negotiate prices and is forced to pay what a drug company says,” Goldstein said. “This is very different to when I buy a coat. If the price is too high, I can walk away.”

Fixed Dosing: A Solution or a New Problem?

Efforts to reduce the financial impact of discarded cancer drugs can blowback on physicians, patients, and payers in other unanticipated ways. Take fixed dosing. Although chemotherapy dosing remains weight-based, many targeted therapies — such as nivolumab and pembrolizumab — recently transitioned to a fixed dosing regimen.

Administering a fixed, instead of weight-based, dose eliminates waste but can create new problems.

“Patients with cancer not only tend to get too high a dose of the drug, but costs go up significantly,” said Goldstein. In a 2017 analysis, Goldstein and colleagues compared dosing strategies in patients with metastatic non–small cell lung cancer who received pembrolizumab. The team found that the total annual cost of weight-based dosing was $2.6 billion, whereas the cost of the fixed dosing strategy was $3.44 billion — 24% more. In other words, personalized weight-based dosing would save more than $825 million dollars in the United States each year.

A 2020 analysis based in France found a similar cost increase of 26% for fixed dosing of pembrolizumab as well as nivolumab.

“I’ve argued we should go back to weight-based dosing,” Goldstein said. “Why should we give a higher dose with the same efficacy when that dose will cost significantly more and has the potential to increase adverse events?”

DiMarco educates patients about their treatment plan, reviews their lab results, and monitors them for side effects and drug interactions.

She also thinks a lot about costs.

“We spend about $100,000 a day on oncology drugs, and we want to make sure we’re not being wasteful,” DiMarco told Medscape Medical News.

One major initiative to curb waste and reduce costs at Jefferson has centered on dose rounding, which calculates whether a specific dose can be altered slightly to conserve vials and prevent waste. According to the Hematology/Oncology Pharmacy Association, a patient can receive up to 10% more or less of a weight-based dose without impacting treatment efficacy.

At Jefferson, DiMarco and her pharmacy colleagues map out dose ranges for all patients. Anyone who falls inside the 10% may be eligible for dose rounding. Anyone who doesn’t will receive the usual dose.

Although it is a challenge to implement, dose rounding has become standard of care at many cancer centers across the United States and is linked to substantial savings.

A 2018 analysis projected annual savings of $865,000 associated with rounding down eight monoclonal antibodies for patients with metastatic disease at a community cancer center. A more recent analysis from the Mayo Clinic found that dose rounding saved a total of 9814 drug vials — 4485 of which were cancer drugs and 5329 of which were biologics — and resulted in $7.3 million in savings over 6 months in 2019 — $1.56 million from oncology agents and $5.7 from biologics.

And in a small 2019 analysis, researchers at Jefferson showed dose rounding of one monoclonal antibody saved approximately $30,000 in just 3 months, DiMarco noted.

“Not only does this process reduce costs and waste, but it also standardizes the preparation of hazardous medications, which can help prevent medication errors,” DiMarco said.

Nibbling Around the Edges

Despite estimates that scale into the billions of dollars, “drug wastage is just a small part of overall cancer costs,” Sarfaty said.

Fumiko Chino, MD, a radiation oncologist at MSK, agrees. “When we talk about affordability and cost, we can nibble around the edges of what’s really important,” Chino said. “Discarded drugs may cost a lot when you consider them in aggregate, but they are not as important as negotiated drug prices, which could substantially reduce overall costs.”

And until drug prices are addressed on a broader policy level, the cost of cancer care likely won’t improve in a meaningful way.

“But for the patient sitting in front of me, my focus will always be to provide the best care possible,” Binder said.