Home » Health News » After 4 miscarriages, I had depression, anxiety, and PTSD. My doctors just told me to keep trying for another pregnancy.

After 4 miscarriages, I had depression, anxiety, and PTSD. My doctors just told me to keep trying for another pregnancy. 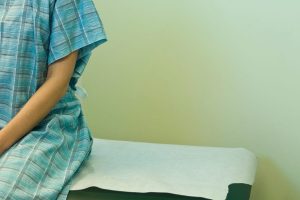 When I got pregnant for the fifth time, after four miscarriages, my husband and I invested in an ultrasound machine to hear our baby's heartbeat at home. I promised myself I would only use it once a day, savoring the moment like a decadent chocolate treat. We listened before bed so I could sleep a little better, and stave off the nightmares of kidnappers yanking babies from my arms. In those two minutes (10 minutes? Forever?), I would have flashbacks to the traumatic checkups when the doctor said: "There is no heartbeat."

So, when I read the results of a recent study, which found that women who experienced pregnancy loss are at a greater risk of developing mental health conditions — compared to women who delivered healthy babies — I wasn't surprised, because it happened to me.

In the largest study of its kind, scientists at Imperial College London and KU Leuven in Belgium studied more than 650 women who had a miscarriage before 12 weeks or an ectopic pregnancy, which is when the embryo begins to grow outside the womb. The researchers compared those women's experiences to that of 171 women who gave birth to healthy babies. They found that the women who experienced pregnancy loss were more likely to develop depression, anxiety, and post-traumatic stress disorder.

Miscarriages are common, and occur in an estimated 10% to 20% of pregnancies. While the reproductive field has made significant advances in how it addresses miscarriages and infertility medically, doctors often overlook the long-term psychological effects patients face after pregnancy loss, wrote the authors of the study, which was published in the American Journal of Obstetrics and Gynecology.

But "overlooked" is a generous way of putting it. Each time I had a miscarriage, doctors were most concerned with how to deal with the issue medically — surgery, pills or let it happen on its own. One OB tried to send me to an abortion clinic!

But there was no acknowledgment of the potential emotional fallout.

"The experience of pregnancy loss really is so traumatic," said Dr. Sarah Mathews, a clinical associate professor of psychiatry at the University of Pennsylvania who specializes in women's health. "Even right after a pregnancy loss, there's not enough recognition of how this might affect a woman. Doctors focus on the next pregnancy, rather than assessing for depression or anxiety relating to that loss.

"Once the woman is pregnant again, it really can be forgotten," Mathews added of how most physicians will never speak of the miscarriage again, as if it disappears with the next pregnancy.

I never did forget any of my losses. I still struggle with IVF PTSD, five years after my daughter was born.

Criteria for post-traumatic stress disorder were met by 29% of the women observed in the study after pregnancy loss.

PTSD can manifest itself among women who have miscarriages in a similar way to how it affects veterans and terrorism survivors due to the sleeplessness, and haunting flashbacks.

Pregnancy loss can feel like an internal attack. It was a complete and utter destruction of my insides, my hopes and dreams, hormones, and ability to believe in the natural order of things. People generally suffer PTSD only after they're no longer in danger.  For me, it was after I was done trying to have a baby.

While I was trying, even if I were depressed, anxious or angry about my pregnancy losses, I had no choice but to pull myself up by my bootstraps and make the next fertility appointment, order the latest supplement, fight with my insurance company for coverage and keep my sights on the baby.

But after I had my daughter, all that desolation I'd suppressed during IVF emerged. I was supposed to be ecstatic about the baby (I was, I loved her!), but I also had some other troubling feelings.

I had done nine rounds of in vitro fertilization in three countries with four miscarriages and one baby, and now I was finally in a safe space. In this safe space, I could stop trying, stop covering up emotions, stop pretending — and then the tears leaked through. That was hard, I would wake up in the middle of the night — startled. I can't believe I did all that I thought, when looking at my beautiful baby, still scared for the first few months that she would be gone.

When she came home, we replaced my home heartbeat monitor with a baby monitor, which I could check on my phone. But this time, I couldn't limit myself to checking it once a day (once an hour was more like it.) I needed to make sure she was breathing.

Maybe all new moms do this. But I know that all moms who have suffered a loss definitely do this, beset by the anxiety and PTSD of loss.

Among women who had miscarriages, 11% developed moderate to severe depression, compared to 2% of women who didn't experience pregnancy loss, according to the American Journal of Obstetrics and Gynecology study.

It's a stark difference. But how could it not be?

First I was looking at those cute, grainy printouts from my OB/GYN, and started dreaming of baby names, and then WHAM!

Suddenly, instead of searching for maternity yoga pants (something I was really looking forward to), I was searching for doctors in my insurance plan who could do a D&C to clean out my uterus from my not-baby.

What no one told me was that after pregnancy loss, there were physical effects too: My hormones took a precipitous dive.

When you're pregnant, the placenta produces human chorionic gonadotropin (hCG), a hormone, which makes your skin glow, your hair shine and gives you a boost of general happy feelings. When you lose a pregnancy, your hCG levels start to decrease. So, aside from feeling sad about the loss of my future baby, I was feeling physically down, depleted of my feel-good hormones.

Not to mention, there's the additional side effect of weight gain. After each loss, I put on five pounds. That's nothing compared to losing a baby, but it felt like adding insult to injury: I wasn't pregnant and I still had a baby bump?!!

After a miscarriage, a woman can develop crippling anxiety about going through the ordeal all over again

Nearly a quarter of the women surveyed suffered anxiety after pregnancy loss, according to the AJOG study.

After, I couch surfed and barely ate. My anxiety occurred around the thought of trying again — especially since trying by that point meant costly IVF. And actually, I was most anxious about the thought of getting pregnant again, staying pregnant, and getting to birth and have a baby.

This feeling is pretty common, too.

Dr. Lora Shahine, a reproductive endocrinologist, has written about how this issue has affected so many of her patients.

"It hit me like a ton of bricks," Shahine wrote in her book  "Not Broken: An Approachable Guide to Miscarriage and Recurrent Pregnancy Loss," about informing a patient that she was pregnant for the fifth time."This was just the beginning of the limbo, waiting, and anxiety until she knew whether this would be a successful pregnancy or not."

I couldn't enjoy my fifth pregnancy, which resulted in the birth of my daughter because I was too anxious

During my fifth pregnancy, I wish I could have been elated like other expecting moms. I wish I could have relished every moment of every second of my daughter's gestation. But I had to get past all the milestones of when I had lost the previous ones — the first ultrasound, the second ultrasound, the first trimester. Going to the doctor for a routine checkup was particularly stressful, as I couldn't help but recall all those times I was laughing beforehand and crying after.

My losses occurred five years ago, but I can still be triggered to tears by any mention of miscarriage. That was the case when I watched Dr. Miranda Bailey's miscarriage play out on "Grey's Anatomy" or while reading about this pregnancy loss study.

Studies like these can help to raise awareness about how a woman's emotional well-being needs to be addressed as much as her physical well-being after a miscarriage, Dr. Mathews said.

"We need to identify these women because we do have treatments that work," she said, referring to therapy, like those offered to cancer patients during treatment. "The only way to get them to that treatment is to assess for the symptoms."

While it's obvious to me, and to anyone else in the pregnancy loss community how devastating miscarriage can be, it's not always so obvious to the medical community. Doctors have said insensitive things to me like, "just bad luck, I guess," and "keep trying." Perhaps now, with this new available data, they won't say those kinds of things to patients struggling with pregnancy loss, and may actually offer some recommendations for supportive services.

If they need an extensive, well-funded study to make that happen, I'm all for it.