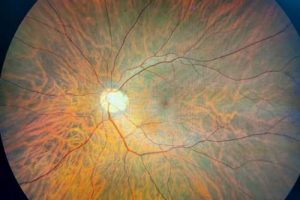 However, PCS pathogenesis has not been well-characterized and requires further investigation. The retinal capillary system is representative of the entire human body’s microcirculation and may represent systemic microvascular changes in systemic diseases. Studies have demonstrated that blood flow impairments could be a potential PCS trigger.

In the present prospective study, researchers investigated if retinal microvasculature circulation could be an objective-type biomarker of the subjectively-reported CF among PCS patients.

The study was conducted at the Ophthalmology department of the University of Erlangen–Nuremberg in Germany and comprised 201 individuals, of which 173 were PCS patients, and 28 were control patients. Retinal microcirculatory assessments were performed based on OCT-A analysis and were quantified as the vascular density (VD) for peripapillary vessels and macula. In addition, participants underwent ophthalmic examinations such as non-contact intraocular pressure (IOP), best-cured visual acuity (BCVA), and axial length measurements.

In the first model, PCS patients were compared to controls, with sex and age as covariates. In the second model, the control group was excluded with CF as the independent variable, and the bell score was added as a predictive variable with the same covariates. SARS-CoV-2 infections were confirmed by positive real-time RT-PCR (reverse-transcription-polymerase-chain reaction) analysis reports.

The average time following SARS-CoV-2 infection was 231 days. Post-COVID symptoms such as CF, concentration difficulties, loss of hair, postural orthostatic tachycardia syndrome (POTS), and subjectively cooler hands were reported by 92%, 83%, 63%, 19%, and 12%, respectively. Among PCS patients, LS means for overall VD were 30, 22, and 24 for SVP, ICP, and DCP, respectively. The corresponding values for controls were 0.1, 22.6, and 23.7, respectively.

PCS patients with PCS and CF showed LS means of VD of 30, 22, and 23 for SVP, ICP, and DCP, respectively. The corresponding VD values for PCS patients without CF were 28, 22, and 24, respectively. SARS-CoV-2 may infect endothelial cells of retinal microvasculature directly via angiotensin-converting enzyme 2 (ACE2) and result in inflammation and fibrosis since ACE2, a serine protease receptor essential for SARS-CoV-2 entry, is situated in the retinal ICP.

Overall, the study findings showed that OCT-A-measured retinal microvascular circulation could be an objective-type biomarker for the subjectively-reported CF among PCS patients, with the human eye, as a diagnostic organ for the entire human body.

Dr. based clinical-radiological diagnosis and management of oral lesions and conditions and associated maxillofacial disorders.