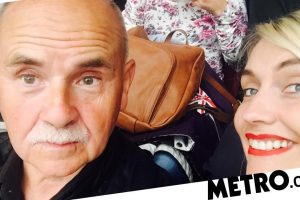 Scrolling through the news online, I click on a story about Dame Barbara Windsor and how having Alzheimer’s disease means she can’t understand why people aren’t visiting her during lockdown.

As I read, her story resonates with me only too well, as it highlights the situation my family currently find themselves in.

My father Stuart, 74, was diagnosed with dementia five years ago but this has been the toughest year for him yet. Just when we had Dad thriving again, the coronavirus pandemic spread across the world.

Yes, he is still here, and that is something I am very thankful for, but his world has changed tremendously and is unlikely to ever be the same again.

At least we can understand what is happening. My dad, like Barbara, is isolating at home and doesn’t know why he can’t see his long-term partner, Hilary, 78, or socialise with his pals at daycare.

His condition had remained relatively stable until last year, when his whole demeanour changed. He would often be irate and we witnessed first-hand the rapid decline in his brain function.

That’s when we had to begin making some serious decisions about his life.

The most heartbreaking one was taking his car away from him after 55 years of driving. I think he understood why – these days he’ll tell me ‘I’m too old to drive now.’

Then, instead of opting for a residential care home, we chose sheltered accommodation in an area familiar to my dad and close to his partner, as well as my brother, Lee.

We organised daily carers to assist him with washing, dressing and administering his medication, and then every Thursday and Friday he would go to daycare at Hull’s Age UK. They’d organise activities and day trips – he loved it.

Although it took a few months for Dad to settle into his new routine, he’d started to thrive. He was dressing himself, taking his tablets, even getting on buses into the city centre on his own, while we monitored his whereabouts via a GPS tracker attached to his keys.

Dad’s diagnosis made us realise that independence is vital to people living with this degenerative disease. However, following the coronavirus lockdown, things have taken a significant downward spiral for him.

For safety reasons, his daycare closed and his partner Hilary had to self-isolate because she is vulnerable.

Soon after, ‘sundowning’ began to set in with Dad, which is when someone experiences changes of behaviour during the evening. It can include a compelling sense of being in the wrong place, or shouting, arguing, pacing and becoming more confused.

While Dad sometimes manages to speak to Hilary on the phone when we call her, he has only managed to see her once since lockdown. It was from the street, when his carer took him for a walk and she stood at her door.

He talks about her often though, and will look at the pictures of her around his home or put them in his pocket to keep them close. In one conversation, he told me: ‘Hilary is terrified. So she has to stay in.’ But then he forgot why she was scared.

At the moment Dad still knows who myself and Lee are – or at least he recognises that we are related to him – but he doesn’t always remember our names. He’ll sometimes refer to me as ‘that lady,’ which does make me laugh.

We’ll show him old photographs, and while my dad doesn’t recognise us as children, he’ll know himself. He’ll ask ‘who is that baby?’

I’m now sure that if Dad had been left on his own during this confinement period, he wouldn’t eat or drink throughout the day. We have to ensure he is cared for 24 hours a day at the moment. When we go out for a walk, he sees people in masks queuing at shops and says, ‘I don’t believe it’, as he looks on in complete surprise.

Dad wet the bed for the first time ever during lockdown. The doctor advised it could be a UTI, a common recurring illness for dementia sufferers that can cause sudden confusion because it exacerbates symptoms.

When his mood didn’t pick up after the UTI cleared, I became really concerned. He wasn’t interested in personal care and slept in his clothes – on many days he didn’t even get out of bed.

I finally felt like I had achieved a small breakthrough recently, when I gave him some brand new jeans and a bright flamingo shirt to wear, and he actually put them on.

He liked them so much he agreed to have a shower and dress himself, and we had a dance to his record player. For the first time in ages, my dad was smiling – but it wasn’t long before sadness returned.

Lee brought him a table and chairs to sit outside on his balcony, so he could watch the world go by, but he soon lost interest.

A few days after that Dad went out for a walk unaccompanied and ended up trying to get on a bus and pay for his fare with his house keys. Thankfully, the driver called the police, who brought him home. But it really scared Dad. He just didn’t understand what he’d done wrong or how he could have put himself and others at risk.

We’re trying to keep Dad abreast of the Covid-19 situation and sit him in front of the news, but it doesn’t seem to be having the desired effect.

Heartbreakingly, his behaviour is continuing to decline. Just this week he lost his temper and lashed out at my brother when he asked him to take off his coat.

I managed to get him into his nightclothes for bed (which is often challenging) and put on one of his favourite TV shows – Paul O’Grady: For the Love of Dogs. But after that finished, he got up out of bed, put his shoes and said: ‘Are we going out then?’ Clearly confused again, we called the GP for the third time that week, who sent an emergency doctor to examine him. While his blood pressure and pulse physical condition was fine, they prescribed Dad mirtazapine to help stabilise his mood.

But where do we go from here?

While we try to protect our dad’s health from the risk of Covid-19, we are struggling to save his mental health.

Dementia is one of the most significant illnesses that face us today, and there are currently no effective treatments to slow, prevent or cure it.

According to Dementia UK, almost one million people are now living with a form of dementia and it is a disease that doesn’t just affect the elderly – although it is more common – as individuals can begin with early onset dementia in their thirties.

All that we can wish for is that once lockdown lifts, my dad’s mood begins to lift with it and he’s afforded the luxury to enjoy his final years with dignity.

If you’re loved one is suffering during the Covid-19 outbreak for help and advice visit Alzheimers UK here.