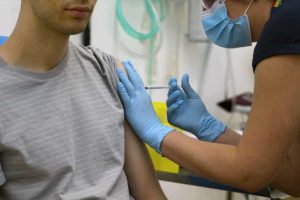 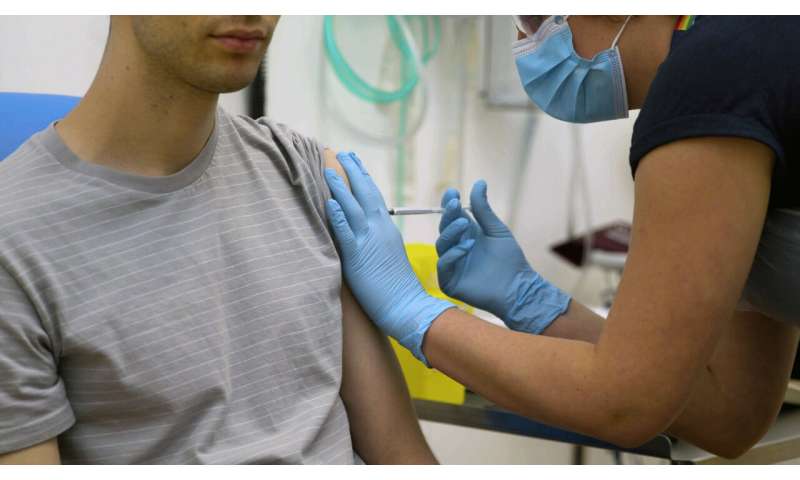 Hundreds of people are rolling up their sleeves in countries across the world to be injected with experimental vaccines that might stop COVID-19, spurring hope—maybe unrealistic—that an end to the pandemic may arrive sooner than anticipated.

About 100 research groups are pursuing vaccines with nearly a dozen in early stages of human trials or poised to start. It’s a crowded field, but researchers say that only increases the odds that a few might overcome the many obstacles that remain.

“We’re not really in a competition against each other. We’re in a race against a pandemic virus, and we really need as many players in that race as possible,” Dr. Andrew Pollard, who is leading the University of Oxford’s vaccine study, told The Associated Press.

The hard truth: There’s no way to predict which—if any—vaccine will work safely, or even to name a front-runner.

As Dr. Anthony Fauci, the U.S. government’s top expert, put it: “You need more shots on goal for a chance at getting a safe and effective vaccine.”

The first cautious tests of March, when small numbers of volunteers got injections to check for side effects, have turned into larger studies in China, the U.S. and Europe to look for hints that different vaccine candidates really protect.

Next: Finding out for sure if any of the vaccines work in the real world by testing large groups of people in areas where the virus is circulating—a tricky prospect when study participants may be in places where the virus is fading or they are told to stay home—and finding a way to quickly distribute lots of doses of any successful candidates.

Policymakers are devising plans to try to overcome both obstacles in an attempt to compress the years it usually takes to develop a vaccine. Asked if a vaccine by January was possible, Dr. Deborah Birx, the White House coronavirus task force coordinator, told Fox News Sunday “on paper, it’s possible. It’s whether we can execute,” she said.

Fauci has cautioned that even if everything goes perfectly, 12 to 18 months to develop a vaccine would set a speed record—and January will mark a year since the National Institutes of Health began creating its own COVID-19 vaccine, now in trials with Moderna Inc.

Depending how you count, there are between eight and 11 vaccine candidates in early stages of testing in China, the U.S., Britain and Germany—a collaboration between Pfizer Inc. and BioNTech last week began a study in Germany that’s simultaneously testing four somewhat different shots. More study sites are about to open in still other countries—and between May and July another handful of different vaccines is set to begin first-in-human testing.

There’s no shortage of volunteers.

“This allows me to play a small role in fighting this thing,” said Anthony Campisi, 33, of Philadelphia, who received his first test dose of Inovio Pharmaceuticals’ DNA-based vaccine at the University of Pennsylvania last month. “I can be a guinea pig.”

The initial vaccine candidates work in a variety of ways. That’s important because if one type fails, maybe another won’t.

Different types of vaccines work better in some virus families than others. But for coronaviruses, there’s no blueprint. Back in 2003 when scientists attempted vaccines against SARS, a cousin of the new virus, animal studies hinted at safety problems but then SARS disappeared and vaccine funding dried up. Vaccines against another COVID-19 cousin named MERS have only reached first-step safety testing.

“In 20/20 hindsight, we should have worked harder on coronavirus vaccines back then,” said Dr. Sten Vermund, dean of the Yale School of Public Health. Now, “we’re obligated to try a variety of strategies if we want fast results.”

China’s Sinovac and SinoPharm are testing “inactivated” vaccines, made by growing the new coronavirus and killing it. The companies have revealed little information about how the shots differ. But the technology is tried-and-true—polio shots and some types of flu vaccine are inactivated virus—although it’s hard to scale up to rapidly produce millions of doses.

Most other vaccines in the pipeline aim to train the immune system to recognize a piece of the new coronavirus—mostly, the spiky protein that studs its outer surface. 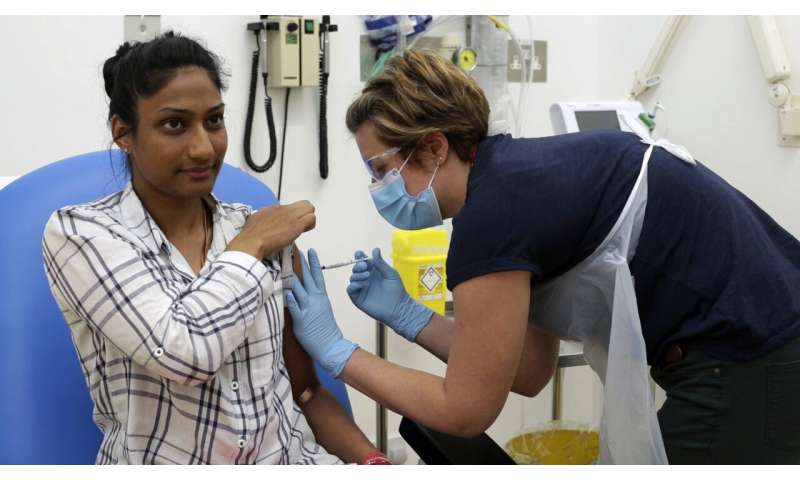 One way: Use a harmless virus to carry the spike protein into the body. It’s easier to produce but determining which virus is the best “carrier” is a key question. China’s CanSino Biologics brewed its vaccine using a common cold-causing adenovirus, engineered so it won’t spread in the body. And in case people’s immune systems fight off the cold virus before the vaccine can do its job, Pollard’s Oxford team instead chose an adenovirus that normally infects chimpanzees.

Another way: Inject a piece of the coronavirus genetic code that instructs the body itself to produce spike protein that in turn primes the immune system to attack. It’s a new and unproven technology but one that promises even faster production. Vaccines made by NIH and Moderna, Inovio Pharmaceuticals, and that Pfizer-BioNtech collaboration use genetic code approaches.

Still more methods are next in line: Vaccine made of spike protein nanoparticles, and even a nasal spray alternative to shots.

Most vaccine studies so far are tracking safety and whether volunteers’ blood shows any immune reactions. Some have jumped to larger numbers quickly, but there’s still concern about being able to prove real-world protection.

If study participants are holed up at home or live in areas where the virus has quit spreading rapidly, then too few may get sick for scientists to tell if the vaccine or social distancing was what protected them. The Oxford study, for example, will track about 1,000 people, half given the real vaccine. But the team plans a later-stage study with another 5,000 volunteers for a final answer and knows it might have to move to other countries.

“When you’re chasing a pandemic, the place that looks like the right one to go to today will be the wrong place two weeks from now. And that makes it really difficult,” Pollard said.

In the U.S., some lawmakers have urged a different and controversial experiment: Recruit young, healthy volunteers who agree to be deliberately infected with the new coronavirus to prove if a vaccine protects them. But some healthy adults do die from COVID-19—and until doctors better understand why, that so-called “challenge study” makes for a risky proposition with serious ethical questions, Yale’s Vermund noted.

The World Health Organization last week called for countries to offer to be test sites for an international project that will speed the timeline by admitting on a rolling basis promising vaccine candidates for further study in locations where COVID-19 remains widespread at the time.

In the U.S., the Trump administration is planning its own project dubbed Operation Warp Speed that will overlap studies of “different candidates that are made differently and act differently,” Birx said.

If early evidence was strong enough and the virus is still widespread, the Food and Drug Administration might even consider emergency use of a vaccine before final test results were in, Dr. Peter Marks, who directs the FDA office that oversees vaccines, recently told reporters.

Whenever the first useful vaccine is identified, there won’t be enough for everyone. So a growing number of vaccine makers say they’re already starting to brew tons of doses—wasting millions of dollars if they bet on the wrong candidate but shaving a few months off mass vaccinations if their choice pans out.

“We need to start building new manufacturing sites now,” said Wellcome Trust vaccine chief Charlie Weller. “And we need to accept that some of these sites will be created for vaccines that will ultimately fail.”

It’s not just a gamble for shareholders. The U.S. government already has deals with Moderna and Johnson & Johnson that together total nearly $1 billion and include scaling up production.

“The critical thing at the beginning is just to make as much stuff as we can,” said Dr. Richard Hatchett, CEO of the Coalition for Epidemic Preparedness Innovations, which is funding several COVID-19 vaccine attempts around the world.

Even if one works, expect rationing early on as policymakers determine who most needs the first doses—possibly health workers or the elderly—until there’s enough for the world, rich and poor countries alike.

“I am concerned about what I call vaccine nationalism. That’s the tension between obligations elected leaders will feel to protect the lives of their citizens” versus the imperative for equitable global sharing, Hatchett said.

And with billions who’ll need a dose or maybe several, just one winner in this race won’t cut it.