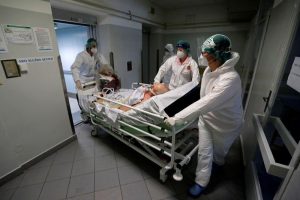 PRAGUE (Reuters) – Hospitals across the Czech Republic may be overwhelmed with coronavirus patients in two or three weeks, forcing the country to seek help abroad and hospitals to select which patients will get treatment, Health Minister Jan Blatny said on Wednesday.

It was the starkest warning yet from the government, which has faced criticism from the opposition and citizens groups for chaotic management and unpredictability, but also growing demands to ease restrictions.

Blatny said the government was considering re-opening retail stores from Monday, hoping that would not lead to an escalation of infections, and allowing more students to attend schools from March 1.

The country of 10.7 million had the most cases per capita in Europe except Portugal on a two-week basis, the European Centre for Disease Prevention and Control’s data showed. Deaths have reached 18,596, the second-worst death rate behind the United Kingdom, according to ourworldindata.org.

In two western districts on the German border and a north-eastern district on the border with Poland, hospitals have been forced to repeatedly seek to transfer patients elsewhere.

“If we together don’t prevent further spread at this level, then within two or three weeks the whole country will be likely in the same situation,” Blatny said.

“We are preparing hospitals for launching the system of shortage of resources, prioritising among patients like in the case of a disaster,” he told reporters.

The country had 1,196 COVID patients at intensive and high-dependency care units as of Wednesday morning, just below the peak of 1,200 reported in November.

Blatny said the country would ask Germany to take in a limited number of patients when the intensive-care bed capacity drops to single digits.

The government has blamed widespread failure to adhere to rules for the spread of the infections, and Blatny said he hoped people would behave more carefully when given more personal responsibility.

“The only chance is to rely on the people, that when given the possibility to decide for themselves, they will make the right decision,” he said.