From a Forgotten Scalpel to a Mistakenly Removed Kidney: 5 Stories of Surgeries Gone Wrong 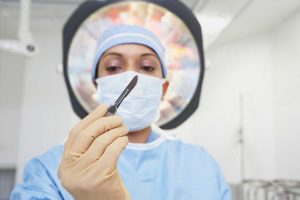 Army Veteran Claims Scalpel Was Left in His Abdomen

Army veteran Glenford Turner, 61, had a mysterious pain following a radical prostatectomy in 2013, and discovered four years later that there was a “5 inch scalpel handle” stuck in his abdomen.

He is now suing VA Connecticut Health Care System, claiming that the trainee surgeon who performed the operation at their West Haven Campus left the scalpel in Turner’s body.

“It’s perplexing to me how they could be so incompetent that a scalpel that really should only be on the exterior of your body not only goes into the body but then is sewn into the body,” Joel Faxon, Turner’s lawyer, said. “It’s a level of incompetence that’s almost incomprehensible.”

As Jennifer Melton got some rest after giving birth to her son Nate in December 2015, a doctor mistakenly requested him from the nursery to perform a “tongue-clipping” surgery that was intended for another baby.

Melton learned of the error when nurses brought Nate back to her at University Medical Center in Lebanon, Tennessee, and told her how this would improve his ability to breastfeed.

“I picked up my precious Nate and looked in his mouth and saw speckles of blood under his tongue,” she told PEOPLE. “I immediately began crying, wondering what had they done to my innocent child! It’s not like he can speak up and tell them to stop.”

The doctor called Melton immediately and said that Nate will be fine, but she said that she’s worried about his future.

“I know it’s a job for doctors and it can get repetitive, but we have feelings and we are human beings,” she said. “I don’t want anybody to feel like I felt in that moment and how I feel now, stressing over the uncertainty of our future and what’s in store for my sweet baby who is innocent and new to the world.”

Lucinda Methuen-Campbell went to a private hospital in Bristol, England for surgery to repair a bowel disorder in 2014. But the surgeon, Anthony Dixon, allegedly decided to remove her ovaries during the procedure without her consent, because they were “in the way,” Methuen-Campbell told BBC News.

“He said he thought he’d done me a favor. And he said, ‘I thought you know, a woman of your age wouldn’t really need her ovaries,’ ” she previously said. “I said ‘Why did you remove them?’ and he just said ‘They were in the way.’ ”

Methuen-Campbell committed suicide in January 2018 at age 58, and her family and a coroner believe it was due to the pain of the botched surgery and trauma from losing her ovaries.

Dixon is now suspended from two hospitals, and under investigation by the U.K.’s National Health Service.

After multiple botched surgeries, doctor Christopher Duntsch was charged in 2015 with six assault charges. His infractions ranged from allegedly leaving a sponge inside a patient to operating on the wrong side of another patient’s spine.

Duntsch, who worked as a neurosurgeon at Baylor Regional Medical Center in Plano, Texas between 2012 and 2013, left one patient hemorrhaging so badly that she died, and another patient suffered a stroke.

Duntsch said in 2014 that “99 percent of everything that has been said about me is completely false,” according to The Dallas Morning News.

California surgeon Charles Coonan Streit was disciplined in 2014 for removing a prisoner’s healthy kidney and leaving the diseased one in his body.

Streit, who had been practicing for 41 years at the time of the surgery, reportedly went by his own memory to figure out which kidney to remove because he didn’t have the patient’s complete medical records. He was suspended for three years as a result.

The inmate later underwent surgery to remove the correct kidney and fix the error.