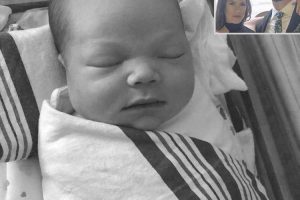 Kara Keough Bosworth is paying tribute to her late son McCoy Casey, who died shortly after his birth, on what would have been his first birthday.

In a heartbreaking Instagram post Tuesday, the daughter of Real Housewives of Orange County star Jeana Keough began alongside a black-and-white photo of her son with his eyes closed, "A year ago today, I screamed you into this world. I begged God to let me hear you scream back. Instead, there was silence from you before the 'Come on, McCoy' chants started, shattering my heart and completely deflating the euphoria that comes after birth."

She went on to recall her son's quick entry into the world, writing, "That night, I felt loved, supported, empowered. It was the most wonderful experience followed by the worst ending. Over the next 6 days, I'd have to make a conscious effort to say 'I love you' more than I said 'I'm sorry.' Both are true, I am so sorry and I do love you so much."

Keough Bosworth, 32, also reflected on what some of McCoy's milestones might be today, from whether he'd be walking yet to some of his first words, his "favorite food" and his personality traits.

"Those questions don't help, but I ask them anyway. I know I always will," she continued. "I'll love you for all the days of my life, and loving you the way that I do makes me feel like I know God."

Kara Keough Bosworth Opens Up About Final Moments with Newborn Son as Daughter, 4, Came in to Say Goodbye

Keough Bosworth continued her post by musing, "So I guess it's true what they say, that grief is next to holiness. Thank you for teaching me how to love unconditionally. And that grief and love can sit beautifully right beside each other."

"And finally, thank you for showing me that even though losing you feels dark — it's also true that with depth comes darkness, like the ocean," she said. "And just like the depths of the ocean, my love for you — the love of a parent for their child — it just keeps going. So yeah, it may be a little dark down here … but it's deep, too."

"I love you, McCoy," she concluded. "From my deepest to the Highest. From earth to the heavens and back. We miss you something wonderful. Happy 1st Birthday, Baby."

Keough Bosworth gave birth to McCoy, her second child with husband Kyle Bosworth, on April 6 at 3:10 a.m., she said in an Instagram post later that month, with their son "weighing in at 11 lbs. and 4 oz., and spanning 21 inches." He died after experiencing "shoulder dystocia and a compressed umbilical cord" during the birth.

"McCoy surprised us all with his size and strength (and overall perfection)," Keough Bosworth wrote at the time. "He joined our Heavenly Father and will live forever in the hearts of his loving parents, his adoring sister and those that received his life-saving gifts."

The grieving mother went on to say that she was donating her baby boy's organs, reciting the words she wrote for the organ/tissue procurement team to read out in McCoy's honor. The passage ended with, "May angels lead him in. Thank you, McCoy."

Keough Bosworth announced on Easter Sunday that she and her husband, 34, are expecting their third child, beginning the caption of her bittersweet Instagram post, "For Christians, for Jews, and for me, this time is a reminder of the death of firstborn sons. Sacrifice. Suffering. Mourning. Grief."

"Last Easter was the worst night of my life. We held our firstborn son in our arms as he took his final breaths. We spent time in the hell that is watching your child die," she added. "This Easter is decidedly better. Despite that wretched Easter night, I can't ignore that this day also represents rebirth. Renewed hope."

Alongside the emotional message was a trio of photos featuring the couple's daughter Decker Kate, 5, as well as an Easter basket for the baby on the way, which included a rainbow onesie and a sign that read "I will not cause pain without allowing something new to be born."

"We miss you, Mack-a-doodle. Thank you for sending us this sacred gift. You're a big brother!" Keough Bosworth concluded her post, signing off with a touching message to her late father, Matt Keough, who died weeks after his grandson: "Tell Grandpa that I said he was right. He'll know what I mean."