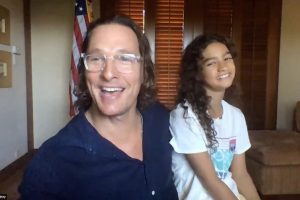 Matthew McConaughey's daughter has a little constructive criticism for him.

The 51-year-old actor's middle child Vida, 10, joins her famous father on camera briefly during an interview with Amy Jo Martin for her newest Why Not Now? podcast episode, out in full on Saturday — and PEOPLE has an exclusive first clip that shows the cute exchange between McConaughey and his daughter.

"What's one lesson you find yourself learning over and over?" Martin asks her guest, who initially replies, "We learn lessons — we know they're right, we know they're true, [but] activating them and having them instinctively become a habit is a different thing."

The Greenlights author goes on to call to Vida off camera, asking, "What's one lesson I have to keep on learning over and over?" McConaughey then beckons to his daughter, who comes into the frame and sits on her dad's lap as he introduces her to the host. "What do I keep repeatedly having [to be] like, 'Ah, I have to learn that one again?' " he asks her.

Vida's response? "Trusting, I guess, when you correct us. A lot of times you'll correct us and then you'll come back and you explain why you corrected us," she says of herself and her two brothers: Livingston, 8 this month, and Levi, 12. "But usually, we're just like … "

" 'We got it the first time,' " McConaughey finishes for her with a hearty laugh, to which Vida agrees, "Yeah."

"Trusting that they got it the first time," the Oscar winner confirms to Martin. McConaughey and his wife Camila have recently faced the unique challenge of raising their little ones in quarantine amid the ongoing COVID-19 crisis. To the Dallas Buyers Club actor's proud delight, though, his children have more than risen to the occasion.

"They have doubled down on their hobbies, creative things and parts of themselves I don't think they would have leaned into if they were back in school," he told PEOPLE in October. "One of the assets of this COVID quarantine is they've been forced to be more self-reliant. They've been forced to create their way out of their boredom."

Aside from his kids' interests in photography and storytelling, "Vida really likes to paint and draw and loves graphic novels," McConaughey added. "For Levi it's probably more music. Basically he came out of the womb knowing a minor from major key on the piano. In the last six months, he really got into listening to composers, and he now can listen to a movie and tell you, 'Oh, that's Hans Zimmer,' or 'That's John Williams,' which is really cool."