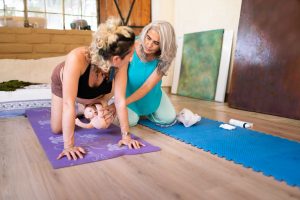 Some advocates welcomed the new benefit in Medi-Cal, the state’s Medicaid health insurance program, as a step toward professionalizing this group of nonmedical birth workers. They say better pay may encourage more people to become doulas. Other advocates, however, called it a partial victory, saying that the rate is still too low for the amount of time and work it takes to ensure healthy deliveries.

Doulas had initially criticized the state for offering one of the lowest rates in the nation, $450 per birth — so low that many said it wouldn’t be worthwhile to accept Medi-Cal patients. In response, Gov. Gavin Newsom last month increased his proposal to $1,154, far higher than in most other states.

For some, that still won’t be enough in a high cost-of-living state with caseloads limited by the unpredictability and time-consuming nature of doula work. Many doulas can serve only two or three clients a month as the work frequently requires they be on call.

“I’m wildly unimpressed,” said Samsarah Morgan, a doula in Oakland who has been in the field for over 40 years. “That’s not a living wage for someone to do this work.”

The rate in other states that offer doula services through Medicaid typically runs between $770 and $900. Oregon this month joined Rhode Island in offering the highest rate, at $1,500 per birth.

California lawmakers passed a budget on June 13. Once the governor signs the new spending plan, Medi-Cal coverage for doula services will take effect in January 2023 and cost $10.8 million a year. California would pay about $4.2 million, and the rest would be covered by the federal government.

“We recognize the value of the work that doulas provide to mothers and infants, specifically, the intensity of the services and length of time doulas spend,” the state’s Department of Health Care Services, which administers Medi-Cal, wrote in a May 13 email to a group of doulas and researchers advising the department on the new benefit.

Doulas act as coaches, guiding families through pregnancy and advocating for them in the hospital during labor and delivery, as well as through the postpartum period. Doula services have been associated with better birth outcomes, such as lower rates of cesarean sections, more breastfeeding, and fewer babies born underweight.

Doulas also serve women undergoing abortions or experiencing miscarriages — something the doula advisory group hopes the state will agree to cover in the future.

Yet it’s hard to know how many doulas work in California because the field is unregulated. Most of their work is for patients who pay out-of-pocket, up to $3,500 depending on location and the doula’s experience.

Advocates hope that adding doulas to Medi-Cal’s covered services could help lower maternal mortality rates, especially for Black mothers, who die because of childbirth at a rate nearly three times that of white mothers.

During negotiations, doulas sought as much as $3,600 for each pregnancy and for maternal support through a year after birth. They wanted $1,000 for attending labor and delivery and $100 each for up to six sessions before birth and 20 postpartum sessions.

Under the governor’s latest proposal, the state would pay $126.31 for an initial visit and $60.48 for up to eight subsequent, shorter visits. Labor and delivery would be reimbursed at $544.28. The state or Medi-Cal insurers could approve additional visits.

The Newsom administration set the doula labor-and-delivery pay at the same rate as physicians and midwives. “This proposal recognizes that while doulas have less formal training than that of a licensed practitioner, doula services are different and typically last significantly longer than a visit or a birth event with a licensed practitioner,” the state wrote in the May 13 email, whose authenticity was confirmed by KHN.

Doulas could have negotiated a flat rate with the administration but believed billing for each visit would be fairer to workers, said Anu Manchikanti Gómez, an associate professor at the School of Social Welfare at the University of California-Berkeley who studies doula programs in California. The downside, however, is that some doulas may not earn the full rate if their clients don’t use all their allotted visits before or after birth.

“Because the rate for perinatal visits is so low, it doesn’t make a huge difference overall in terms of state expenditures,” Gómez said. “But $900 vs. $1,100 could be hugely important to a doula.”

Though the reimbursement rate is lower than what doulas asked for, some said it still represented progress. Khefri Riley, a Los Angeles doula who helped negotiate the new rates, said bringing doula services into Medi-Cal could create a pathway for new birth workers to enter the profession. “The needle has been shifted slightly,” Riley said.

Others said that the new rate is more acceptable but that the numbers are still tight for doulas. Chantel Runnels serves clients in the Inland Empire and may drive more than 100 miles round trip for patients. With gas prices above $6 a gallon, Runnels said, “everybody is feeling the squeeze.”

Some doulas point to local government and private insurance programs that pay even more. One doula pilot program in Los Angeles paid up to $2,300 per birth, and one in Riverside paid up to $1,250.

“We live in one of the most expensive states, and I think there’s lots of great wins in the revision that reflect that they’re listening to the nature of doula work,” Runnels said. “There’s still lots of room for improvement.”

State governments will often figure out what’s reasonable by checking rates in other states. California looked to Oregon, which was offering $350 per birth. But that rate was so low that few doulas were willing to accept Medicaid patients.

Then, on June 8, Oregon announced it would begin paying doulas $1,500 per birth. Raeben Nolan, vice president of the Oregon Doula Association, said that increase was the product of seven or eight years of lobbying.

Nolan said California was initially racing Oregon to the bottom with its first proposal. Now, she applauds California’s turnaround.

“I love that they have so many visits paid for,” Nolan said. “I think that’s really good.”