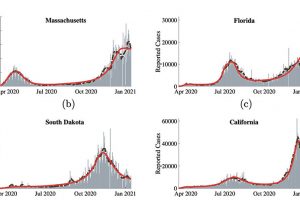 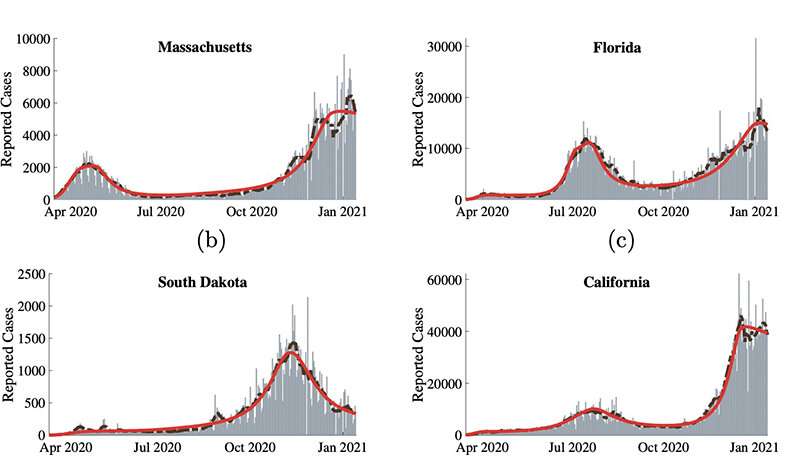 By adding behavioral components to an infectious disease model, Brown University researchers have developed a new modeling approach that captures the peaks and valleys in new COVID-19 cases seen over the past 16 months.

The approach, published in the journal Scientific Reports, could be useful in forecasting the future trends in the current pandemic, as well as in predicting the course of future ones.

“We know that people’s behavior matters in terms of how an infection is spread,” said Vikas Srivastava, an assistant professor of engineering at Brown and principal investigator of the research. “We wanted to see if we could quantify those behavioral aspects, incorporate them into a model and see whether that model is able to capture waves of infection rates we saw in the U.S. and elsewhere.”

A commonly used approach to modeling infectious disease transmission is what’s known as an SIR model. The approach separates a population into distinct categories: susceptible, infected and recovered. The model moves people from one category to another according to two parameters. The transmissibility of the disease, along with the rate at which people contact each other, predict how quickly people move from susceptible to infected. The rate of recovery moves people from infected to recovered. (“Recovered” in these models generally means “no longer contagious,” which also includes those who have died from the infection.)

The standard SIR model produces a curve with a single peak—the one that infectious disease experts urged people to flatten through social distancing, masks and other measures that reduce virus transmission. But over the last 16 months, actual case rates in individual states, in the U.S. as a whole and in other nations didn’t produce a single curve. Instead, they produced multiple waves of infection that created a significant challenge for the infectious disease modeling community, Srivastava says.

As the pandemic unfolded, Srivastava was teaching a class that included a section on infectious disease modeling in Brown’s School of Engineering. He and his students were surprised to see the mismatch between model predictions and actual case rates.

“We saw cases going up and down, creating multiple peaks, but models were falling short in capturing it,” Srivastava said. “That’s what got us thinking about using population behavior and response as a way to explain and predict what is happening.”

Srivastava worked with two Brown undergraduate students, Zachary LaJoie and Thomas Usherwood, to develop the new modeling strategy. They modified a standard SIR model to include the effects of vaccination, and also added two behavioral parameters to the model. The first, “level of caution,” estimates people’s tendency toward safe behavior—social distancing, mask-wearing and other safety measures—as reported cases increase. The parameter also captures government actions in response to rising case rates, such as closures and quarantines, that increase safe behavior. A second parameter, “sense of safety,” models people’s confidence in a return to pre-pandemic activities as more people get vaccinated. 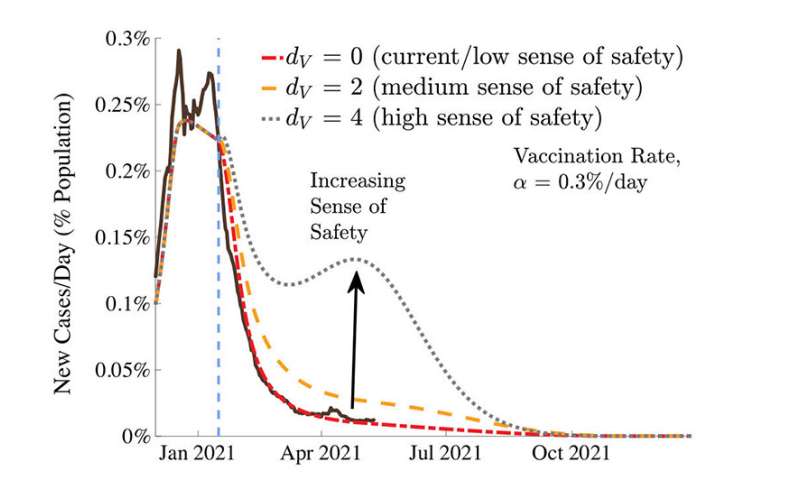 The team then used an optimization algorithm to calibrate values for the new parameters based on case rates reported in the U.S. With the parameters optimized, the team found that the model accurately reproduced case rates throughout the pandemic in the U.S. as a whole and in individual states and cities.

“When we looked at New York City, for example, we saw a spike in our level of caution variable right around the same time government action went into effect in late March,” LaJoie said. “Then as cases went down later on, we saw the level of caution come down, and there was another surge in cases going into the holidays.”

With the model properly fit to the data, it enables insights into how the pandemic may unfold in the future. For example, the team was able to measure how different rates of vaccine uptake might affect case rates. Rising rates of vaccination could drive a reduction in cases, but they could also reduce levels of caution and increase the sense of safety among the unvaccinated. That could put an upward pressure on case rates even as vaccines are pulling them down. In fact, the model predicts scenarios where brief periods of rising infection rates occur as vaccines are rolled out, before they eventually begin to decline again.

In the U.S., for example, the model captures a short period of increasing infection in mid-April before rates began falling again. Larger surges in places like India look similar to the more extreme post-vaccination surges the model predicts. At its current rates of vaccination, the model predicts that cases in the U.S. should approach zero by August 2021.

Insights like that, the researchers say, could be useful in places where vaccination programs are just getting underway.

“When we developed the model, we focused on the U.S., but it would definitely be useful for making predictions in other places like India, Europe or South America where case rates are still pretty high,” LaJoie said.

The modeling approach could also be applied to future outbreaks or pandemics.