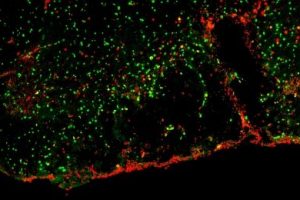 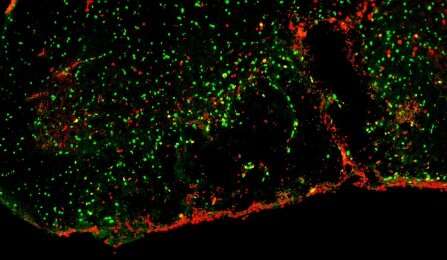 Two papers by University at Buffalo researchers reveal important new findings as to how regeneration of myelin in multiple sclerosis fails and, potentially, more efficient ways to treat it. The findings include the first demonstration that an existing drug, currently being studied as a cancer therapy, can alter key signaling cascades that result in MS.

Published in the Journal of Neuroscience and in Nature Communications, the preclinical research on mouse models of MS reports on the discovery of a single pharmacological target that can influence multiple pathways at once, potentially interfering with the many causes of MS with a single drug.

The UB findings underscore the significant role that the extracellular matrix plays in causing demyelination in the brain, which is a hallmark of MS. Described as a kind of non-cellular scaffolding for all tissues and organs, the extracellular matrix plays a vital role in initiating many critical biochemical and tissue-specific signaling cascades. In the brain, this includes those responsible for regulating the repair of myelin, the fatty insulator that keeps neurons communicating.

The role of the extracellular matrix is being increasingly appreciated as a key variable in MS that can determine whether or not remyelination will occur after it has been damaged.

“In multiple sclerosis, it has long been known that tissue scarring—literally, the sclerosis of MS—is a key pathological feature and that the environment, the extracellular matrix, orchestrates signaling that either supports or hinders the processes of tissue repair and regeneration,” said Fraser Sim, Ph.D., senior author on both papers, associate professor of pharmacology and toxicology in the Jacobs School of Medicine and Biomedical Sciences at UB, and neuroscience program director. Darpan Saraswat, Ph.D., senior research scientist in Sim’s lab, is first author on both publications.

“In diseases such as MS,” Sim explained, “the extracellular matrix undergoes profound change. These changes alter the interactions between cells contributing to a failure of myelin repair or remyelination.”

The UB research has focused on key enzymes involved in the regulation of heparan sulfation, which plays a key role in signaling between cells. In particular, the researchers studied what role the heparanome plays in remyelination. The heparanome, Sim explained, refers to the highly complex nature of how heparin sulfate, a carbohydrate polymer that is modified by sulfation in a very specific way, appears on the surface of a cell.

“The heparanome contributes to the extracellular matrix environment and regulates the activity of multiple signaling cascades to influence cell behavior and function in development and in disease,” said Sim. He added that the heparanome regulates a host of vital signaling cascades that regulate both the repair of myelin and the biology of oligodendrocyte progenitor cells (OPCs), the cells that generate myelin.

In the Nature Communications paper, Sim and his colleagues show that SULF2, one of the enzymes involved in regulating heparan sulfation, is highly expressed by OPCs. In MS patients, he said, it is found at high levels in regions of demyelination and likely exerts a profound influence on the diseased tissue environment.

“We found that when we genetically deleted SULF2 from OPCs, it resulted in accelerated remyelination through improved recruitment and differentiation of OPCs,” said Sim.

They also found that a pharmacological agent called PI-88, currently in clinical trials as an agent against various cancers, blocks SULF2 and is capable of accelerating the recruitment of OPCs into regions of demyelination and promoting the regeneration of new oligodendrocytes and myelin.

The researchers continued their study of PI-88 in the Journal of Neuroscience paper, examining its ability to alter the heparanome in the context of a highly inflamed tissue environment. They found that PI-88 could improve remyelination even after the repair process mediated by OPCs was halted by the infusion of the proinflammatory cytokine interferon-g, which results in the chronic demyelination and axonal degeneration that is a hallmark of progressive forms of MS.

Sim and his colleagues recently were awarded a Department of Defense grant that will allow them to continue exploring PI-88 as a potential MS treatment.

“These two publications highlight a novel role for the heparanome in the regulation of remyelination,” said Sim. The research suggests that molecules such as PI-88, which can alter both the balance of heparin sulfate production and overall sulfation, are attractive targets for regenerative therapies in MS and other demyelinating diseases.

A target such as the heparanome, which influences so many aspects of cellular behavior and function, provides an efficient approach to addressing the multiple pathways involved in the demyelination of MS.