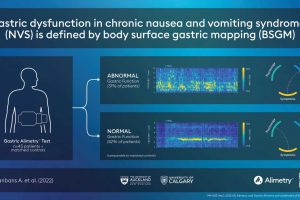 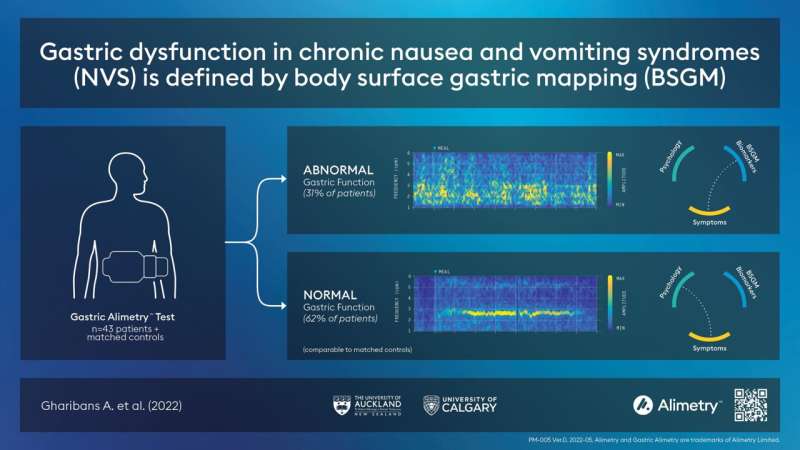 Non-invasive sensors laid on the skin’s surface to measure bioelectrical activity could offer a better alternative for patients suffering with poor gut health.

“Many people suffering with chronic gut issues are on a constant diagnostic treadmill of antibiotics or proton pump inhibitors until they are sent for an endoscopy. A reliable surface-based recording could bridge the gap between symptom-based diagnostics and the more invasive minor surgery tests.”

Like the rhythmic beatings of the heart, gut movements depend on bioelectrical activity—but the electrical activity in the gut has been much more difficult to reliably detect. Researchers at ABI and the Faculty of Medical and Health Sciences’ Department of Surgery have employed a novel device using a sticky patch of sensors and a recording device and associated techniques to create a new and reliable non-invasive tool to map electrical waves from the stomach.

The first paper published in The American Journal of Physiology-Gastrointestinal and Liver Physiology, explored the use of the mapping tool in pigs as a pre-clinical study to validate the BSGM prior to advancing to clinical trials in human patients. BSGM has shown to reliably record bio-electrical activity on the gut’s surface and accurately detect changes in both the frequency or rhythm, and direction of electromagnetic waves with intricate detail.

The second paper published in Science Translational Medicine set out to explore the degree of difference in bio-electrical activity between healthy people and patients with chronic nausea and vomiting syndromes defined by the novel gastric mapping device. While previous surgical and non-invasive studies have shown that gastric dysfunctions are associated with abnormal bio-electrical slow waves, the researchers found surprising results.

“Approximately two-thirds of the symptomatic patient group had completely normal bio-electrical activity, while the rest had abnormal activity. We realized there were two sub types of what was previously considered a single disease.

“This may go on to explain or further classify that single disease into two diseases based on different mechanisms. For example, abnormal bioelectrical activity is likely to point to something intrinsically wrong with the stomach itself, but for those patients who show a completely normal slow wave propagation, their issue is likely arising from somewhere else.

“With this bio-electrical information on hand to inform clinical guidance or treatment, people experiencing chronic vomiting or nausea may be directed to different pathways and may receive diagnosis and more appropriate treatment options sooner.”

Associate Director of the Bioengineering Institute, Peng Du says the novel findings and prestigious publications are “a great outcome” and represents decades of research done at ABI and the Faculty of Medical & Health Sciences.