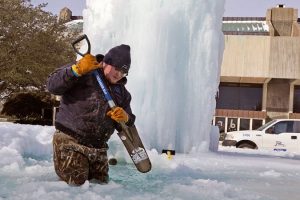 Health officials in Texas scrambled to give thousands of COVID-19 vaccines on Monday after harsh winter weather knocked out the power for deep freezers storing the doses, according to ABC News.

A facility in Harris County that stored Moderna vaccines lost power early Monday morning, and a backup generator also failed. The freezers had more than 8,400 doses, which officials worried would expire that day.

“We quickly put together a plan to allocate and to salvage them,” Lina Hidalgo, a judge in Harris County, said during a news conference on Monday evening.

Hidalgo and colleagues looked for places with a large number of people and enough medical personnel on site to give the vaccines. They doled out more than 5,400 doses to the Harris County Jail, Houston Methodist Hospital, Lyndon B. Johnson Hospital, Ben Taub Hospital, and Rice University.

They saved the remaining 3,000 doses after Moderna told health officials that they could re-refrigerate the doses and give them to people according to the normal distribution process.

Across the country, cities and states have delayed the COVID-19 vaccine distribution process due to winter weather challenges, according to CNN. Locations in Missouri, Nevada, and Texas have postponed appointments or reported shipment delays.

In Texas, San Antonio officials shifted vaccine appointments scheduled at the Alamodome from Tuesday to Saturday, and Corpus Christi officials said vaccine shipments were being delayed. The Nevada Health Response also said the state may face delays this week.

“Our team is monitoring closely & working with health districts & pharmacies that may be affected,” officials wrote in a post on Twitter. “We ask Nevadans to continue to be patient at this time.”

In Missouri, Gov. Mike Parson announced that the state has canceled all mass vaccination events scheduled through Friday due to the extreme weather. Vaccine shipments will be redistributed to community hospitals with emergency generators, he said.

“Missouri is experiencing severe winter weather that makes driving dangerous and threatens the health and safety of anyone exposed to the cold,” Parson said in a statement on Monday.

“These conditions will also likely delay some vaccine shipments,” he said. “We want to protect the safety of everyone involved in the mass vaccination events, from the patients being vaccinated to the volunteers who generously support these events.”