Home » Health News » When coronavirus kills, the lung condition ARDS can be the culprit. Here’s what you need to know.

When coronavirus kills, the lung condition ARDS can be the culprit. Here’s what you need to know. 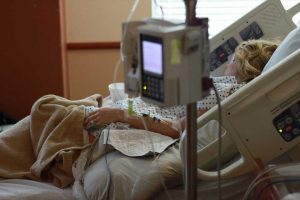 When she was 33, Eileen Rubin learned firsthand what it’s like to have acute respiratory distress syndrome or ARDS, a life-threatening condition she had never heard of.

ARDS is one of the most severe complications caused by the new coronavirus, and early estimates show it could affect perhaps 1 in 100 people with the virus. ARDS kills 30% to 40% of the people who get it. Survivors require weeks of mechanical ventilation in the hospital and lots of help in recovery. Many say they’re still functioning below par a year later, even though their lungs appear to have recovered.

Rubin, a lawyer who founded and is now president of the ARDS Foundation, said ARDS can start in many ways: with a virus like the flu or coronavirus, vaping, smoke inhalation, a gunshot wound to the lungs, pancreatitis. She first became sick in 1995 with pain in her lower back that spread to her chest. Soon she was in the emergency room with kidney failure. She was on a ventilator for eight weeks, the first four in an induced coma. Her spleen was damaged. Her lungs collapsed. She had delirium.

When she began feeling better, she was helpless. “I was unable to lift even a finger,” she said. “I had no muscle tone, no small motor skills, no large muscle skills.”

It was eight months before she could go back to work.

Rubin said cases of ARDS like hers that are caused by sepsis are among the worst, but recovery from the syndrome is a hard for everybody.

About 200,000 Americans get ARDS each year. There are no medicines for it. Mechanical ventilation helps spread oxygen to tissues and remove carbon dioxide until the lungs can recover. Doctors treat other stressed organs as best they can. Patients are often given physical therapy to maintain some muscle strength. Antibiotics are meant to prevent further infection, and patients are fed through tubes. “You’re essentially doing everything for the patient at this point,” said Reynold A. Panettieri Jr., vice chancellor of clinical and translational science at Rutgers University.

It’s unknown what percentage of people with COVID-19, the disease caused by the new coronavirus, will develop ARDS. A Chinese report published last month on hospitalized patients found that 3.4% had ARDS. At a media briefing Monday from the ARDS Foundation, Michael Matthay, a critical care medicine doctor at University of California San Francisco, said he estimates that 1% to 3% of COVID-19 patients will get ARDS. Because some people have very mild or no symptoms and have not come to the attention of doctors, many rates currently cited for aspects of the disease may come down.

People over age 60, smokers, and those with chronic conditions like diabetes and heart disease are at highest risk for COVID-19 complications and death, but Matthay said there also have been cases of ARDS among healthy people in their 30s, 40s and 50s.

Most people who get COVID-19 have relatively mild flu- or cold-like symptoms such as fever and cough, Panettieri said. They’re sick no more than two weeks. Some are better within 72 to 96 hours. Shortness of breath may show up two to three days into the disease and it is a warning sign. “Then you’re really concerned about pneumonia,” he said.

Pneumonia, a lung infection, is the big killer in patients with flu and other respiratory infections. It causes the tiny air sacs in lungs to fill with fluid, reducing their ability to supply oxygen to the body. This can be caused by bacteria or viruses. In flu, it is often caused by bacteria that move in after the initial viral infection. In COVID-19, the virus itself usually causes the pneumonia. An intense reaction from the immune system can add to lung inflammation, doctors said.

Nuala Meyer, pulmonary and critical care medicine doctor at Penn Medicine, said a strong immune response is necessary to kill the virus. Sometimes, some parts of the immune system are functioning properly while others are not. The fact that the elderly, who tend to have weaker immune systems, are most vulnerable to COVID-19 implies that over-reaction of the immune system is not the primary problem, she said.

When pneumonia spreads to both lungs, blood oxygen levels are well below normal and patients require assisted ventilation—such as high-flow oxygen or a breathing machine—the diagnosis shifts to ARDS. A small percentage of ARDS patients may also need an ECMO, extracorporeal membrane oxygenation, machine, which oxygenates blood outside the body.

Meyer said early reports are showing a high percentage of hospitalized patients with COVID-19 developing ARDS. They often have “profound hypoxia” or low oxygen levels in their tissues. Some also have low blood pressure and, later in the course of the disease, heart problems.

Meyer said that Italy’s experience with COVID-19 shows demand is likely to be higher for ventilators than ECMO machines. Many patients will need the machines for 10 to 14 days and some will need them longer. Matthay said patients spend an average of 25 days in an intensive care unit.

Rubin and Matthay said there is an urgent need for better treatments and any medications for ARDS. Matthay said there are some antiviral drugs in the early phase of testing. High-dose vitamin C is also being tested for ARDS in general.

For now, Rubin said, “we have nothing.”

Patients who survive the devastating syndrome generally have almost normal lung function a year later, Meyer said. But weeks of hospitalization take a toll on muscles. Many say they are not as strong as they were before hospitalization. Even five years later, they function at lower levels physically than peers. Panettieri said younger people and those who were in better shape before they got sick tend to recover more muscle strength.

Rubin, who is now doing well, said about one-third of ARDS patients never go back to work. Another third work reduced hours. Rates of depression, anxiety and post-traumatic stress disorder are high.