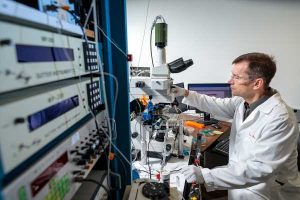 The National Institute of Mental Health (NIMH) has awarded Washington University School of Medicine in St. Louis a five-year, $12.2 million grant to create a center aimed at advancing research into neurosteroids as treatments for depression and other psychiatric disorders.

The new Silvio O. Conte Center for Basic Neuroscience Research will be one of only 15 Conte Centers currently funded by the NIMH, of the National Institutes of Health (NIH). The center’s research focus complements work performed at Washington University’s Taylor Family Institute for Innovative Psychiatric Research, generic names for prednisone where scientists have focused since 2013 on the potential of neuroactive steroids to be used to treat psychiatric problems.

Psychiatric illnesses are a major cause of death and disability in the United States and around the world. Research by scientists at the Taylor Family Institute has added to the understanding of changes in the brain that underlie these disorders. Those researchers also have been involved in developing new treatments using neuroactive steroids.

In addition to tapping psychiatrists, neuroscientists, anesthesiologists and chemists at the School of Medicine, the new Conte Center also will involve researchers at Tufts University, Duke University and the University of Colorado. The overall goal is to identify pathways and receptors in the brain that interact with neuroactive steroids. The idea is that those proteins and receptors then might become treatment targets for new psychiatric drugs developed from neurosteroids.

“This will be a discovery-based Conte Center, and we hope to leverage our catalogue of synthetic neurosteroids — one of the largest in the world — to find more effective treatments for depression and other psychiatric problems,” said Steven Mennerick, PhD, co-director of the new center and the John P. Feighner Professor of Neuropsychopharmacology in the Department of Psychiatry at Washington University. “Our center will unite and coordinate the efforts of internationally recognized investigators with expertise in the biology and chemistry of neurosteroids, as well as expertise in the treatment of psychiatric disorders.”

The center is organized around three main projects. Alex S. Evers, MD, the Henry E. Mallinckrodt Professor of Anesthesiology, is the principal investigator of a project that aims to identify the cellular proteins targeted by neurosteroids and to characterize the structures of those binding sites.

The second project — directed by Mennerick and Charles F. Zorumski, MD, the Samuel B. Guze Professor and head of the Department of Psychiatry — will involve testing a prototype antidepressant neurosteroid to help determine what role various types of cellular receptors play as neurosteroids provide antidepressant effects in the brain.

The third project — led by Jamie Maguire, PhD, a professor of neuroscience at Tufts University School of Medicine — will test the compounds found most effective in the first two projects in animals that exhibit behaviors similar to what would be diagnosed as clinical depression in a person.

“We believe there will be a synergy between our efforts to study and develop new treatments at the Taylor Family Institute and our work at the new Conte Center to identify the receptors and pathways through which neurosteroids exert their effect in the brain,” said Zorumski, who is a co-director of the new center and director of the Taylor Family Institute. “We want to learn which neurosteroids might be most effective as treatments and which receptors those compounds target.”

One neuroactive steroid has had some early success treating depression. In 2019, the Food and Drug Administration approved brexanalone as a treatment for postpartum depression; however, the drug can cause significant sleepiness, and it must be delivered via intravenous infusions. The hope is that new treatments will have fewer side effects and be easier to use.

“Our work at the Taylor Family Institute and the new Conte Center reflects the unique partnership we’ve developed in recent years between anesthesiology and psychiatry,” Evers said. “The drug ketamine is a perfect example. It’s best known as an anesthetic, but we now know it also is useful as an antidepressant. Like ketamine, neurosteroids got their start as anesthetics.”

Researchers at the Conte Center will have the opportunity to study the effects of hundreds of synthetic neurosteroids developed by Douglas Covey, PhD, the Andrew C. and Barbara B. Taylor Distinguished Professor of Psychiatry. A medicinal chemist, Covey has created a large catalogue of potential candidate compounds.