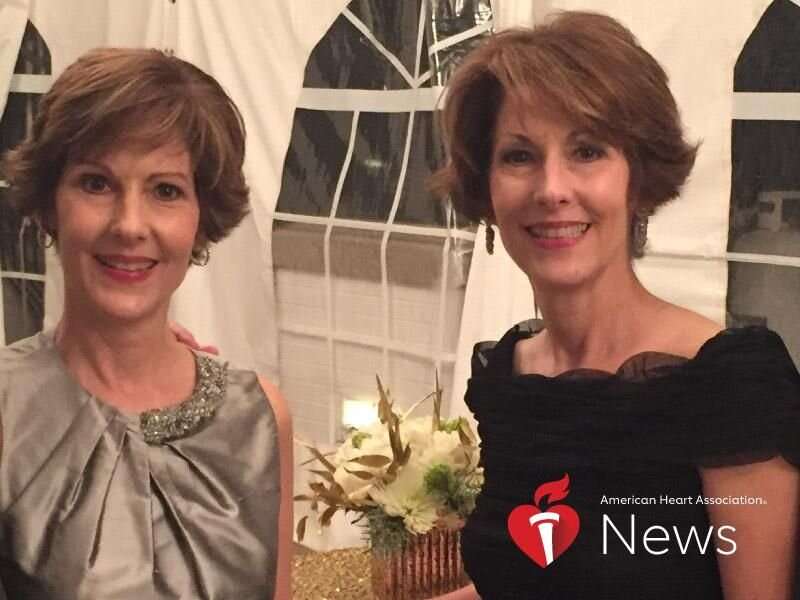 As identical twins who look alike, sound alike and even have the same mannerisms, Patricia Wood and Pamela Smith are used to people mistaking them for one another. Even before birth, retin a rebate their heartbeats were so perfectly synchronized that doctors didn’t realize there were two until the day they were born 62 years ago.

“Pat was so competitive, she had to go first,” Pam said.

“Pam pushed me out to see if it was dangerous,” Pat chimed in, chuckling.

Heart disease runs in their family—their father died of a heart attack when they were 3. So, aware they might be at higher risk, the sisters made a choice in their 20s to stay fit and eat healthy, selecting, for example, organic chicken and steamed vegetables over fried foods and red meat.

Because of that vigilance, when Pat woke up early one morning in 2019 with a debilitating pressure high in her chest, she considered many things that might be causing it—and a heart attack wasn’t among them.

At their local hospital, a blood test detected a protein called troponin in Pat’s blood—a sign of a heart attack. So, they sent her by critical care ambulance to a nearby hospital that had a cardiac catheterization lab. There, doctors discovered a 100% blockage in a major coronary artery. “It can’t be my heart,” Pat shouted in denial.

The pressure in her chest continued as the doctor performed the catheterization procedure, threading a wire through an artery in her wrist and weaving it into the heart. At the site of the blockage, the doctor placed a stent to prop open the artery and restore blood flow. Pat felt immediate relief.

“The gates opened up again, and I could breathe,” she said.

Considering how much else they had in common, Pam soon scheduled a checkup with her cardiologist. A stress test showed her heart was healthy.

“I felt like I was going to beat it,” she said.

But this past September, just over a year later, Pam felt a strange flutter high in her chest and a sensation on the left side of her neck. Soon, she began to sweat profusely. Just like Pat, she felt it couldn’t be her heart. She had been given the “all clear” less than a year before by her cardiologist.

But the next morning, she still felt something was wrong. At her local hospital, staff found an elevated troponin level and was transferred to the catheterization lab. The procedure showed she had a 90% blockage in the same artery as Pat’s blockage.

Also like her sister, Pam’s other arteries were pristine.

Upon release, Pam started attending cardiac rehab. Because her sister had been treated at the same facility near their homes in North Carolina, the staff felt they already knew her.

She has made good progress physically, but still struggles to adjust to her new status as a heart attack survivor.

Even something as simple as filling out a medical form makes her feel emotional. Gone are the days of quickly checking “no” on most boxes.

“All of a sudden I’ve had a heart attack, I have a stent, and I’m taking all these drugs to make sure the body doesn’t reject it,” Pam said. “You’re in a different category.”

The sisters are determined to raise awareness about the role genetics plays in heart disease. Last year, Pat was named a Go Red Woman for the American Heart Association’s Forsyth County chapter. This year, Pam has the same title.

“I don’t look like the model of somebody who’s had a heart attack,” Pat said. “With COVID, I feel robbed of my ability to get out there and be seen. I’d hoped to have more opportunities to get the word out.”

Even so, the twins are grateful to have each other for support. Constantly together before the pandemic, they now enjoy virtual chats over coffee every morning, and they call each other throughout the day.