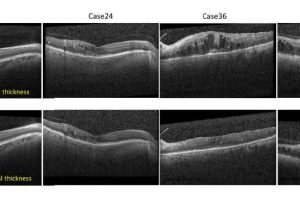 A new approach that uses artificial intelligence to analyze retinal images could one day help doctors select the best treatment for patients with vision loss from diabetic macular edema. This diabetes complication is a major cause of vision loss among working-age adults.

Anti-vascular endothelial growth factor (VEGF) agents are widely used as the first line of therapy for diabetic macular edema, but they don’t work for everyone. There’s a need to identify who would benefit from the therapy because it requires multiple injections that are costly and burdensome for both patients and physicians.

“We developed an algorithm that can be used to automatically analyze optical coherence tomography (OCT) images of the retina to predict whether a patient is likely to respond to anti-VEGF treatments,” said research team leader Sina Farsiu from Duke University. “This research represents a step toward precision medicine, in which such predictions help clinicians better select first-line therapies for patients based on specific disease conditions.”

In The Optical Society (OSA) journal Biomedical Optics Express, Farsiu and colleagues show that the new algorithm can analyze just one pre-treatment volumetric scan to accurately predict whether a patient is likely to respond to anti-VEGF therapy.

“Our approach could potentially be used in eye clinics to prevent unnecessary and costly trial-and-error treatments and thus alleviate a substantial treatment burden for patients,” Farsiu said. “The algorithm could also be adapted to predict therapy response for many other eye diseases, including neovascular age-related macular degeneration.”

Predicting treatment responseThe algorithm developed by the researchers is based on a novel convolutional neural network (CNN) architecture, a type of artificial intelligence that can analyze images by assigning importance to various aspects or objects. They used the algorithm to examine images acquired with OCT, a noninvasive technology that produces high-resolution cross-sectional retinal images and is the standard of care for assessing and treating many eye conditions.

“Unlike previously developed approaches, our algorithm requires OCT images from only a single pretreatment timepoint,” said Reza Rasti, first author of the paper and a postdoctoral scholar in Farsiu’s laboratory. “There’s no need for time-series OCT images, patient records or other metadata to predict therapy response.”

The new algorithm preserves and highlights global structures in the OCT image while enhancing local features from diseased regions to efficiently use retinal thickness information. To help with treatment decision making, the researchers incorporated an additional step that looks for CNN-encoded features that are highly correlated with anti-VEGF response.

Based on the results, the researchers calculated that the algorithm would have an 87 percent chance of correctly predicting who would respond to treatment. It exhibited an average precision and specificity of 85 percent and a sensitivity of 80 percent.