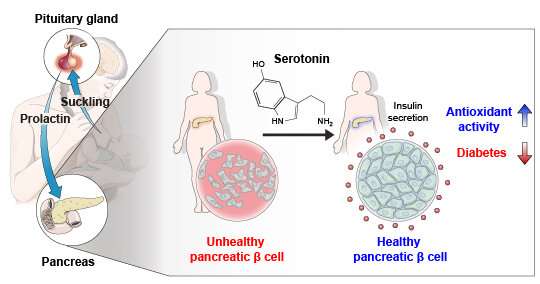 A team of South Korean researchers found that lactation can lower the incidence and reduce the risk of maternal postpartum diabetes. The researchers identified that lactation increases the mass and function of pancreatic beta cells through serotonin production. The team suggested that sustained improvements in pancreatic beta cells, which can last for years even after the cessation of lactation, improve mothers’ metabolic health in addition to providing health benefits for infants.

Pregnancy imposes a substantial metabolic burden on women through weight gain and increased insulin resistance. Various other factors, including a history of gestational diabetes, maternal age, and obesity, further affect women’s risk of progressing to diabetes after delivery, and the risk of postpartum diabetes increases more in women who have had gestational diabetes and/or repeated deliveries.

Diabetes-related complications include damage to blood vessels, which can lead to cardiovascular and cerebrovascular diseases such as heart attack and stroke, and problems with the nerves, eyes, kidneys, and many more. Since diabetes can pose a serious threat to mothers’ metabolic health, the management of maternal metabolic risk factors is important, especially in the peripartum period. Previous epidemiological studies have reported that lactation reduces the risk of postpartum diabetes, but the mechanisms underlying this benefit have remained elusive.

The study, published in Science Translational Medicine on April 29, explains the biology underpinning this observation on the beneficial effects of lactation. Professor Hail Kim from the Graduate School of Medical Science and Engineering at KAIST led and jointly conducted the study in conjunction with researchers from the Seoul National University Bundang Hospital (SNUBH) and Chungnam National University (CNU) in Korea, and the University of California, San Francisco (UCSF) in the US. 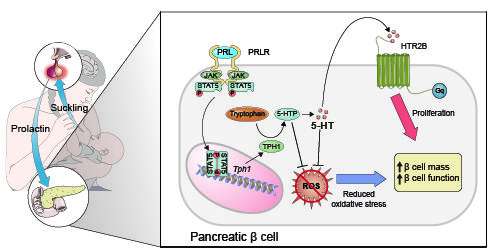 In their study, the team observed that the milk-secreting hormone prolactin in lactating mothers not only promotes milk production, but also plays a major role in stimulating insulin-secreting pancreatic beta cells that regulate blood glucose in the body.

The research team conducted follow-up examinations on a total of 174 postpartum women, 85 lactated and 99 non-lactated, at two months postpartum and annually thereafter for at least three years. The results demonstrated that mothers who had undergone lactation improved pancreatic beta cell mass and function, and showed improved glucose homeostasis with approximately 20mg/dL lower glucose levels, thereby reducing the risk of postpartum diabetes in women. Surprisingly, this beneficial effect was maintained after the cessation of lactation, for more than three years after delivery. 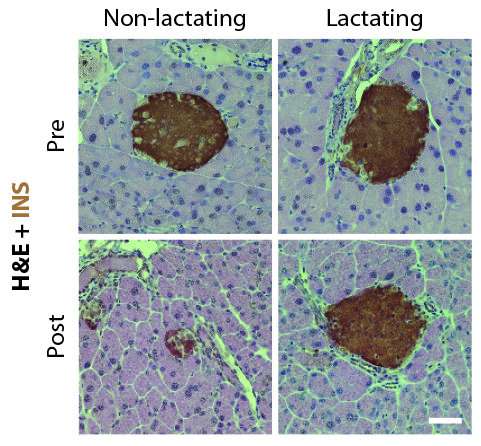