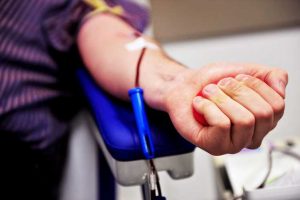 The Food and Drug Administration has reduced its restrictions surrounding blood donations from sexually active gay and bisexual men amid mounting pressure from activists and legislators.

The U.S. blood supply is under threat with donation centers experiencing a dramatic reduction, as well as many blood drives canceled due to the coronavirus pandemic. The FDA therefore announced last week that they were reducing the amount of time male donors who have had sex with men were required to wait before donating blood or blood plasma — the later of which can be donated by coronavirus survivors to be used in experimental treatments aimed to fight the virus.

Under previous guidelines, which were set in 2015, the FDA recommended that gay and bisexual men wait for 12 months before making a donation. The deferral period has now been reduced to 3 months. Prior to 2015, sexually active gay and bisexual men were banned for life from making donations, a policy that had been in place since 1983, when there was no way to test donations for HIV, according to The New York Times. Sexually active women and straight men have no waiting period.

“The FDA has concluded that current policies regarding certain donor eligibility criteria can be modified without compromising the safety of the blood supply,” the government agency said in a statement on Thursday, noting that the changes were expected to remain in place “after the COVID-19 pandemic ends.”

“This wasn’t something we needed to keep anymore,” Dr. Amesh Adalja, an infectious diseases physician at the Johns Hopkins Bloomberg School of Public Health told The New York Times. “These types of restrictions weren’t really making sense in the era of modern diagnostic technology.”

Although LGBTQ activists have called the change a “triumph over discrimination,” many point out that the current guidelines still stop short.

“This is a victory for all of us who spoke out against the discriminatory ban on gay and bisexual men donating blood,” GLAAD President and CEO, Sarah Kate Ellis said in a statement. “[It’s] a step towards being more in line with science, but remains imperfect. We will keep fighting until the deferral period is lifted and gay and bi men, and all LGBTQ people, are treated equal to others.”

Alphonso David, president of the Human Rights Campaign, also emphasized that “our work is not yet done.”

“While this change by the FDA is a step in the right direction, it still bases itself in bias rather than science,” David said in a statement. “Creating policy based on identity as opposed to risk is irrational and given the current COVID-19 crisis, it is more critical than ever to prioritize science and facts over fear and bias.”

The change came as activists and politicians joined together to urge the FDA to rethink the “antiquated policy.”

GLAAD launched a petition in March to lift the 12-month deferment policy, imploring the FDA to “put science above stigma.” In the petition they pointed out that the American Red Cross was not in support of the FDA’s policy, and had previously spoken out against eligibility requirements “based upon sexual orientation.”

The petition has been signed by over 23,000 people, including Sam Smith, Chasten Buttigieg, Nico Tortorella and Rep. Alexandria Ocasio-Cortez.

Ocasio-Cortez and Rep. Carolyn B. Maloney also wrote a letter to the FDA, urging them to immediately “revise its policy of turning away blood donations from gay and bisexual men.”

“This antiquated policy is not based on current science, stigmatizes the LGBTQIA+ community, and undermines crucial efforts to increase the nation’s blood supply as the United States grapples with the coronavirus crisis,” they wrote, noting that over 4,000 blood drives across the country have been canceled due to the virus, which has resulted in about 130,000 fewer donations.

“In light of the potential long-term impacts the coronavirus outbreak may have on the nation’s blood supply, we urge FDA to act swiftly in revising its policy so every person who can safely donate blood in the United States has the opportunity to do so,” they wrote.

Another letter was also written to the FDA by a group of senators, including Bernie Sanders, Cory Booker, Tammy Baldwin and Elizabeth Warren.

“We are steadfastly committed to ending this policy and encourage the FDA to shift to scientific practices that secure our nation’s blood supply based on individual risk rather than the perpetuation of inaccurate stereotypes,” they wrote, noting that “with important advances in blood screening and safety technology, a time-based deferral policy is not scientifically sound.”

According to a 2014 study by the Williams Institute, an additional 360,000 men would likely donate blood should the 12-month deferral period be lifted, which “could be used to help save the lives of more than a million people.”

“It’s too bad that it took a pandemic to actually prompt this, because it should have been prompted much earlier when technology was such that we could ensure the safety of our blood supply,” Dr. Amesh Adalja, an infectious diseases physician at the Johns Hopkins Bloomberg School of Public Health, told The New York Times. “These types of restrictions weren’t really making sense in the era of modern diagnostic technology.”

As information about the coronavirus pandemic rapidly changes, PEOPLE is committed to providing the most recent data in our coverage. Some of the information in this story may have changed after publication. For the latest on COVID-19, readers are encouraged to use online resources from CDC, WHO, and local public health departments. To help provide doctors and nurses on the front lines with life-saving medical resources, donate to Direct Relief here.