Fear of the flush: Social anxiety and public restrooms 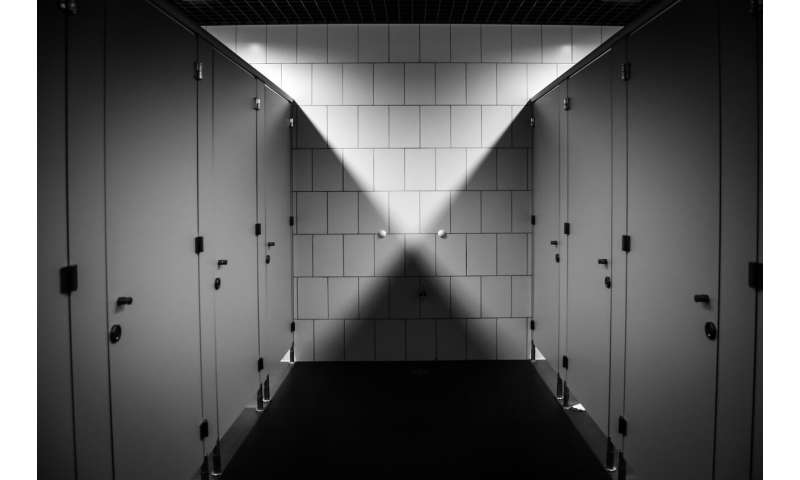 Most people experience anxiety at times. It’s a normal emotion that can help us detect danger. But there’s a fine line between our evolutionary instincts and a debilitating condition.

For example, imagine you’re in a jungle and hear a rustle in the bushes behind you. All of a sudden, you’re super alert and adrenalin’s pumping through your body because it could be a tiger.

In this case, your anxiety is a finely tuned evolutionary survival mechanism. But what if it meant you were fearful of using a public toilet?

On average, one in four people will experience anxiety at some stage in their life, according to Beyond Blue.

Anxiety can make you see risk in everyday things, even using public bathrooms.

Dr. Simon Knowles is a clinical psychologist and Senior Lecturer in Clinical and Health Psychology at Swinburne University and an expert in psychogastroenterology. That’s the application of psychology to gastrointestinal health and illness.

“They are currently best seen as a subtype of social anxiety disorder,” says Simon.

Research suggests almost 11% of Australians experience social phobia during their lifetime, with just under 5% experiencing social phobia in any 12-month period, according to Beyond Blue.

“In extreme circumstances, the social anxiety can be so overwhelming that it stops people from engaging in social activities, such as going to a shopping centre or out with friends.”

“Extreme sufferers of paruresis or parcopresis may experience this in their homes if family members are over.”

It may sound unusual, but Simon says the fear of using public bathrooms is not that different to other manifestations of anxiety.

“Someone may not suffer from paruresis or parcopresis, but they may experience extreme anxiety at the thought of spiders,” says Simon.

Underpinning all forms of anxiety is a physiological response.

“From an evolutionary perspective, anxiety is overactivation of the sympathetic nervous system,” says Simon.

In other words, the fight or flight response.

According to Harvard Medical School, this “carefully orchestrated yet near-instantaneous sequence of hormonal changes and physiological responses helps someone to fight the threat off or flee to safety”.

“If you’re in the jungle and identify a tiger and then run away, you’re more likely to pass on your genes to the next generation,” says Simon.

If tiger attacks are rare these days, why is this survival response still so strong?

“We continue to have the activation of the sympathetic nervous system and the flight or fight response so we can react in times of danger,” says Simon.

“For example, the squeal of tyres when we are walking by a road.”

The downside of this kind of anxiety is a constant fear of danger. For sufferers of paruresis or parcopresis, the danger is perceived to be what people might say.

So what can we do about it?

While forms of treatment such as cognitive behavioural therapy might be suitable for some, it’s not necessary for everyone.

“Every individual will experience times in their life when they feel anxious, but that doesn’t mean they need psychological interventions,” says Simon.

For mild paruresis or parcopresis, bathroom design can help. Privacy screens at urinals may cause less stage fright than an open trough.