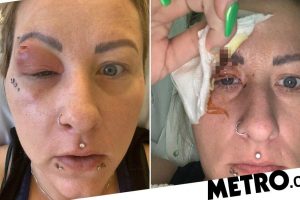 Barber Lyndsey Burbank from San Diego, is no stranger to hair splinters.

Much like any other kind of splinter, these are easily removed with a pair of tweezers – something Lyndsey is used to doing in her profession.

Last month, the 36-year-old awoke to a swollen eyelid having removed a hair splinter at work the day before.

She felt a red bump under the skin and thought a facial would reduce the swelling.

Over the next 48-hours, things got worse as Lyndsey began losing sight in her eye due to the swelling and pain.

Despite the antibiotics she was given, Lyndsey’s condition continued to worsen.

Doctors initially suspected Lyndsey may have developed a staph infection – but ultimately, this wasn’t the case.

Doctors told Lyndsey that she would need to undergo surgery. Not wanting to be admitted, Lyndsey had the procedure done bedside with only a local anaesthetic.

The following day, Lyndsey was admitted to hospital as doctors diagnosed her with Methicillin-resistant Staphylococcus aureus (MRSA) infection and Lyndsey faced the possibility of losing her eye.

MRSA is known as a ‘superbug’ due to its intense antibiotic resistance.

Lyndsey underwent a further two surgeries; doctors were able to drain the infection successfully and rid Lyndsey’s eyelid of some scar tissue.

Since then, Lyndsey has made a full recovery and is left only with a small scar.

She explained: ‘I’ve experienced hair splinters before. They feel similar to a regular splinter and you remove them the same way’.

‘With this particular one, I felt a stabbing feeling in my eyelid. I saw the hair splinter and removed it with tweezers as I have in the past.

‘Forty-eight hours after removing the hair splinter, my eye was extremely red and swollen. I could hardly see. I went to urgent care where I was given antibiotics and sent home.

‘At this point, it was hot and tender to touch – my vision was blurry. I went back to urgent care.’

Lyndsey was reluctant to be admitted to hospital and be put under general anaesthesia.

She was awake during the first procedure where doctors cut the area open and while they had numbed the area, Lyndsey says she felt everything.

‘I was awake for the entire time,’ she says. ‘He numbed the area but I felt everything.

‘He left the incision open so the infection could drain and told me I was being admitted. The next day, I could feel pain in my neck and ear. When the doctor came in, he agreed I was getting worse.’

After a few days of investigating, doctors told her she had an MRSA infection and she was taken to surgery to remove scar tissue.

Lyndsey has had a successful recovery – without any lasting damage and gone back to work.

‘Recovery hasn’t been too awful other than the unsightly scar and redness,’ Lyndsey said.

‘The MRSA is gone and the incision spot is only a little bit tender now. My eye has no damage, but my eyelid does have a gnarly scar. It’s nothing a little bit of make-up can’t hide.’

Do you have a story to share? Get in touch by emailing [email protected]