Home » Health News » Has half the UK already caught COVID-19? Probably not.

Has half the UK already caught COVID-19? Probably not. 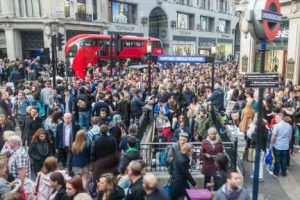 On March 24, a headline in the Financial Times proclaimed that “Coronavirus may have infected half of UK population,” suggesting that many people in the region may have already recovered from and developed some immunity to COVID-19.

But is that actually true?

The news article focused on a new study from the University of Oxford, which has not been peer reviewed or published in a scientific journal. The study authors collected available data about deaths tied to the novel coronavirus, called SARS-CoV-2, reported in both the United Kingdom and Italy, and used these numbers to model how the virus might have spread through the U.K. so far.

In one hypothetical scenario, the authors estimated that viral transmission began 38 days before the first recorded death in the U.K., which took place March 5. They found that, given this start date, 68% of the population would have been infected by March 19. This statistic made headlines in the Financial Times, and later, outlets like the Evening Standard, Daily Mail and The Sun, according to Wired U.K.

But this mathematical narrative rests on several key assumptions that are not backed by real-world data, experts told Wired.

To begin, the authors write that their overall approach “rests on the assumption that only a very small proportion of the population is at risk of hospitabitable illness.” In their most extreme model, the authors estimate that just 0.1% of the population, or one in every 1,000 people, will require hospitalization.

“We can already see just by looking at Italy … that that figure has already been exceeded,” Tim Colbourn, an epidemiologist at University College London’s Institute for Global Health, told Wired U.K. In the region of Lombardy alone, more than one in 1,000 people have been hospitalized, and that number continues to grow every day, Wired U.K. reported.

“The work models one of the most important questions — how far has the infection really spread — in the total absence of any direct data,” wrote James Wood, head of the Department of Veterinary Medicine at the University of Cambridge, who researches infection dynamics and disease control. While the paper poses an important question, the assumptions underlying the model leave the authors’ conclusions “open to gross over interpretation by others,” Wood said.

“As far as I can tell, the model … assumes that all those infected, whether they are asymptomatic, mildly ill or severely ill are equally infectious to others,” Paul Hunter, a professor of medicine at the University of East Anglia, wrote on the Science Media Centre site. “This is almost certainly false.” Data suggest that asymptomatic and mildly symptomatic people may actually fuel the rapid spread of COVID-19.

In addition, the model assumes that the U.K. population would become “completely mixed” over time, meaning any given individual has an equal chance of running into another within the region, Hunter wrote. “We do not all have an equal random chance of meeting every other person in the U.K., infected or otherwise,” he said. Without some acknowledgement of the structure of social networks within the U.K.; the relative risk of running into a mildly symptomatic or asymptomatic person; and the risk of severe infection tied to different demographics, the simplified model “should not be given much credibility,” Hunter said.

In comparison, a recent study from Imperial College London included numbers from several Italian villages where every resident received a diagnostic test and might provide more realistic benchmarks for the extent of infection elsewhere, lead author Niall Ferguson told the Science and Technology Committee, according to Wired U.K. “Those data all point to the fact that we are nowhere near the [Oxford study] scenario in terms of the extent of the infection,” Ferguson said.

Despite its flaws, the Oxford paper did highlight an important point, upon which all the Science Media Centre experts and those who spoke to Wired U.K. agreed:

The U.K. needs to determine how many people have already been exposed to SARS-CoV-2 to shape public health policy going forward. This feat can be accomplished with widespread serological testing (blood tests), which would reveal who has antibodies to the novel coronavirus circulating in their blood. The U.K. has ordered 3.5 million antibody tests and must now validate the kits before selling them to the public, Wired U.K. previously reported.

“As the authors say [in their paper], a proper test will come from serological surveys — which will tell us how many people have been exposed,” Mark Woolhouse, a professor of infectious disease epidemiology at the University of Edinburgh wrote on the Science Media Centre. If data gathered through serological testing does support the Oxford model, it would have “huge implications,” Woolhouse added. For instance, the finding would suggest that many people in the U.K. now have immunity against COVID-19, which would help break the chains of viral transmission to those who are still vulnerable. This phenomenon is known as herd immunity.

“It would imply that the main reason why COVID-19 epidemics peak is the build-up of herd immunity,” he wrote. “Though that would not change current policy in the UK, which is focused [on] reducing the short-term impact of the epidemic on the [National Health Service], it would change enormously our long-term expectations making a second wave significantly less likely and raising the possibility that the public health threat of COVID-19 will diminish all around the world in the coming months.”