Man with back pain finds out he has 3 kidneys 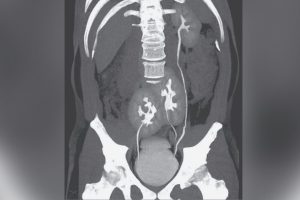 When a Brazilian man went to the doctor complaining of low-back pain, his doctors got a surprise: They discovered that the man had not two, but three kidneys — a very rare condition.

To figure out the cause of the 38-year-old man’s severe pain, doctors at the Hospital do Rim in São Paulo, Brazil, performed a CT scan to evaluate the area, according to a report of the case, published Wednesday (May 6) in The New England Journal of Medicine (NEJM).

The scan showed the man had a herniated or “slipped” disk, a relatively common condition in which part of a cushion-like disk between the spinal vertebrae moves out of place.

But it wasn’t just the herniated disk that caught the doctors’ attention. They couldn’t help but notice that the man had an unusual anatomical feature. Instead of the usual two kidneys seen in a typical person, the man had three: a normal-looking kidney on his left side and two fused kidneys located near the pelvis, the report said.

The man didn’t have any symptoms of a kidney problem, and the organs appeared to be working normally.

Having three kidneys is rare, with fewer than 100 cases reported in the medical literature, according to a 2013 report of a similar case published in The Internet Journal of Radiology. The condition is thought to arise during embryonic development, when a structure that typically forms a single kidney splits in two.

Because the condition doesn’t usually cause symptoms, people typically don’t know they have it unless it’s discovered by accident through unrelated medical tests, the authors of the NEJM report said.

The man didn’t need any medical attention for his extra kidney. But he did receive oral painkillers for his back pain, the report said.