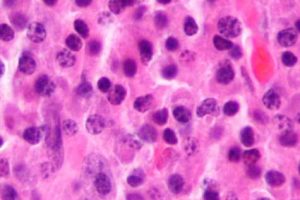 Too many patients with cancers like multiple myeloma relapse after treatment. This grim reality motivated researchers at Huntsman Cancer Institute (HCI) at the University of Utah (U of U) to try to improve the depth and durability of treatment response in multiple myeloma through a new cancer cell targeting mechanism. Multiple myeloma is the second most common blood cancer and develops in the bone marrow. Approximately 30,000 new cases are diagnosed each year, and almost all patients eventually succumb to their disease.

The Utah-based scientists developed CAR T cells that target a molecule, CD229, that is present on the cancer cells of patients with myeloma throughout the course of their disease. Importantly, CD229 is also present on myeloma stem cells, which are the source of treatment-resistant tumor cells in patients who relapse.

Immunotherapies that activate a patient’s own immune system to fight their cancer have proven to be highly effective for many types of blood cancers. In CAR T cell therapy, doctors take T cells from a patient’s blood and engineer them to recognize and attack cancer cells via an added “hook,” called a CAR, that recognizes a surface molecule on cancer cells. Engineered CAR T cells are returned to patients via intravenous infusion. The CAR T cells then find, attack, and destroy cancer cells in the patient’s body. While these approaches have demonstrated remarkable progress and long-term results for some, many patients experience only brief improvement, followed by recurrence of their disease.

The study was led by Djordje Atanackovic, MD, a physician-scientist at HCI and an associate professor of internal medicine, division of hematology and hematologic malignancies at the U of U, who cares for patients with multiple myeloma. The study builds on earlier work by Atanackovic and his colleagues in which they identified CD229 as present on multiple myeloma and other B cell cancer cells. Once the CD229 target had been identified, it took several years to complete the complicated engineering and laboratory work to test whether CD229 was a viable new agent for a CAR T approach.

“We were dismayed that although some of our patients respond quite well to currently available immunotherapies, they relapsed as early as one year after treatment,” says Atanackovic. “We thought if we could target every last cancer cell in a patient’s body, including the cancer stem cell, this could make the critical difference and yield more durable, deeper responses to treatment.”

HCI researchers Tim Luetkens, MD, an expert in cell and protein engineering, and Sabarinath Radhakrishnan, MD, assistant professor of internal medicine at the U of U, led the development of the therapy in Atanackovic’s lab. They engineered the first fully human antibody against CD229 and, with this newly engineered “hook,” produced CAR T cells targeting CD229. They confirmed their hypothesis CD229 CAR T kills mature multiple myeloma cells, as well as myeloma stem cells, using a mouse model, as well as stem cells derived from myeloma patients. They also showed that in this laboratory setting, the tumors treated with CD229 CAR T appeared to result in long-lasting responses.

The team plans to complete further analyses to understand whether this approach can be safely used in humans. They hope to open clinical trials to further understand the potential of CD229 as a novel therapy for multiple myeloma.