Home » Health News » Should you take ibuprofen if you have COVID-19?

Should you take ibuprofen if you have COVID-19? 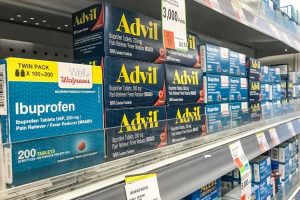 When French Health Minister Olivier Véran warned COVID-19 patients to avoid taking anti-inflammatory drugs such as ibuprofen or cortisone, the statement ignited a discussion among experts and a slew of questions from the general public.

If you have a fever, take paracetamol, the health minister said (Paracetamol and Tylenol are both brand names for a drug called acetaminophen). But do such anti-inflammatory drugs actually exacerbate COVID-19? Experts say there’s not enough data to say.

“There is currently no scientific evidence establishing a link between ibuprofen and worsening of COVID‑19,” the European Medicines Agency (EMA) wrote in a statement on March 18. “EMA is monitoring the situation closely and will review any new information that becomes available on this issue in the context of the pandemic.”

The health minister’s warning was based on a recent letter published in the journal The Lancet that suggested such anti-inflammatory drugs boost the body’s production of an enzyme that sits on the cell’s surface, known as ACE2. The coronavirus hijacks these ACE2 receptors to enter human cells.The authors hypothesized that drugs that spur the body to produce more of this enzyme would allow the virus to infect more cells, which in turn could increase the risk of developing “severe and fatal” COVID-19.

“The only problem is they offer no proof that this actually occurs,” Angela Rasmussen, a virologist at Columbia University in New York, wrote on Twitter. “And this hypothesis relies on several major assumptions that may not be true.”

More of that enzyme, called ACE2, doesn’t necessarily mean more infected cells, as viruses require other proteins in the human cell to replicate, she wrote. What’s more, even if more cells are infected, that doesn’t mean more copies of the virus will be created. And even if these cells produce more viral copies, that doesn’t necessarily mean more-severe disease. The severity of the disease can depend on other factors, such as the patient’s genetics, environment and general health, Rasmussen wrote.

So, should you toss out your Advil if you come down with COVID-19?

“I would not change recommendations based on this yet,” said Dr. Amesh Adalja, an infectious disease expert at the Johns Hopkins Center for Health Security in Baltimore. “I think we need to learn more about what the effect is and if it’s a true effect or [just an] association.”

For example, it could be that people with higher fevers, and thus more-severe disease, are taking these medications more frequently because they have a greater need for fever reducers, he said. In other words, they could have more-severe disease in the first place. It’s also known that anti-inflammatory drugs can exacerbate problems with kidney function in those who have preexisting problems, Adalja told Live Science.

Anti-inflammatories and acetaminophen medications work through different mechanisms in the brain: Acetaminophen targets a brain region that regulates body temperature, whereas anti-inflammatories decrease the production of inflammatory markers, Adalja said. Both effectively reduce fevers. However, in general, a fever is a “protective response,” he added.

At such temperatures, the immune system may work better and invading microbes may not function as well, he added. So for some illnesses, letting a low fever, around 101 degrees Fahrenheit (38.3 degrees Celsius) or so, run its course may be best for most young and healthy people. For those with underlying medical problems, fevers can be more dangerous, he said.

Another reason some experts are concerned about the use of anti-inflammatories is that they may dampen the immune system’s response, according to The Guardian.

By that logic, “anti-inflammatory agents reduce the inflammatory response, which could be beneficial in the early stages of the infection,” said Steve Morse, a professor of epidemiology at Columbia University. But inflammation is good only up to a point.

“Later on, inflammation becomes a serious problem in patients with pneumonia or other severe disease, and exacerbates the damage,” Morse told Live Science.

In China and elsewhere, health care professionals have tried treating patients with steroids to combat such damage caused by the immune response. “It wasn’t clear if it helped, and most people think it didn’t,” Morse said.

In any case, “you wouldn’t want a vigorous inflammatory response in the later stages … so perhaps it’s all in the timing,” he added.

Here in the U.S., the guidelines haven’t changed. “I have not seen any firm data to indicate there’s a problem or to prove there’s not a problem,” Dr. Anthony Fauci, the director of the National Institute of Allergy and Infectious Diseases, said during a news conference yesterday (March 18).

Aspirin, another anti-inflammatory drug, can increase children’s risk of developing Reye’s syndrome, a rare disease that can cause brain and liver damage.

“I think somebody made the leap from that” to say that all anti-inflammatories or nonsteroidals are “the same thing,” Fauci said.

In any case, “if you really want to bring temperature down, Tylenol every 6 hours is the way to go,” Fauci added.