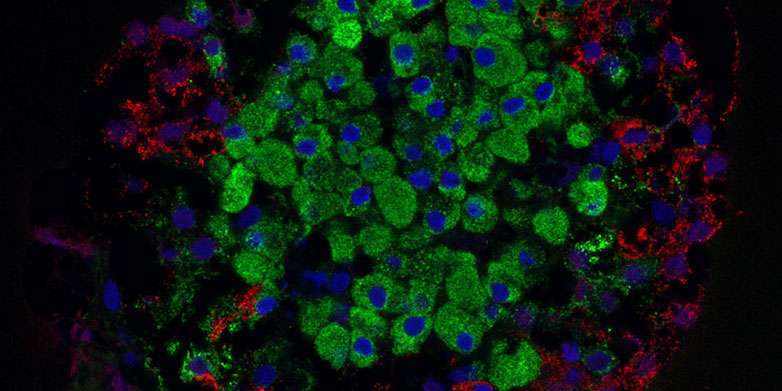 In diabetes, tiny clusters of insulin-producing ‘beta cells’ in the pancreas don’t produce enough of the hormone to keep people healthy, and their blood glucose levels climb. Perhaps unsurprisingly, their beta cells then function very differently than the cells do in people with normal blood glucose levels.

What’s surprising is that the changes in beta-cell behavior begin to occur when the blood glucose levels are barely elevated, still within the pre-diabetes range. “These slightly high concentrations of glucose are enough to really confuse the cell,” says Gordon Weir, MD, senior investigator and senior staff physician at Joslin Diabetes Center.

In a paper recently published in Molecular Metabolism, Weir’s lab laid out a wealth of new data about how beta cells behave at slightly raised levels of blood glucose. The work provides major additional evidence of a “glucose toxicity” effect that helps to drive the development of both type 1 and type 2 diabetes.

Studying beta cells in lab rats whose blood glucose levels were slightly elevated, Weir’s lab found changes in gene expression that affect not just how well the cells function but their ability to divide and grow, as well as their vulnerability to autoimmunity and inflammation.

Weir, professor of medicine at Harvard Medical School, has long studied a puzzling type 2 diabetes phenomenon called first-phase insulin release and how this release is shut down as the disease progresses.

In healthy people with normal blood glucose levels, Weir explains, the body responds quickly to glucose with a big spike of insulin secretion. “If then you take people who have slightly higher glucose levels, above 100 mg/dl, which is still not even diabetes, this first-phase insulin release is impaired,” he says. “And when the level gets above 115 mg/dl, it’s gone. So virtually all the beta cells don’t respond to that acute stimulus.” Fortunately, the cells eventually do wake up and respond to other stimuli well enough to keep blood glucose in a prediabetic range.

In earlier research, Weir and collaborators studied this phenomenon in rats who were surgically altered to generate slightly high blood glucose levels, and found that the rats’ beta cells secreted less insulin. In their latest experiments, the Joslin team employed the same approach along with powerful “RNA sequencing” methods that revealed patterns of gene expression in the beta cells, either four weeks or ten weeks after surgery. “We found incredible changes in gene expression, and the higher the glucose, the worse the changes,” Weir says.

As expected, genes involved in insulin secretion were highly active in the beta cells. More striking were newly discovered alterations in gene expression that could make the cells more vulnerable. Some of these changes were related to cell growth—healthy beta cells may respond to increased blood glucose levels by copying themselves, but these cells were getting stuck as they tried to divide. Additionally, the cells showed many differences in the expression of genes involved in cell inflammation and autoimmunity.

In type 1 diabetes, immune cells called “T cells” begin to kill off the beta cells and blood glucose levels start to creep up. Weir’s team found that in the rats with just slightly greater glucose levels, beta cells showed dramatic increases in the expression of some key genes involved in T cell interactions. That effect could make the beta cells a better target for autoimmune attack, and thus speed the disease.

This finding may improve the understanding of the rapid death of beta cells that patients typically experience just before they are diagnosed with type 1 diabetes, Weir says. It also might shed light on the “honeymoon” period some people experience after diagnosis, in which their blood glucose levels are relatively easy to control. During this period, if insulin treatments can bring the remaining beta cells back down to only slightly elevated glucose levels, the cells can function much better, he says.

Glucose toxicity also might trigger the loss of first-phase insulin release as type 2 diabetes develops, Weir says. Immunologists often blamed this loss on inflammation of the beta cells, but other studies have shown that less than half of these cells appear to suffer from inflammation. “So somehow these beta cells with no evidence of inflammation end up not secreting properly,” Weir says. “We think these higher glucose levels are causing the trouble.”