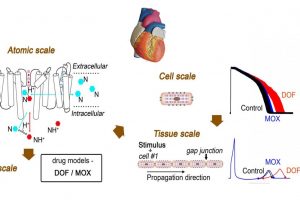 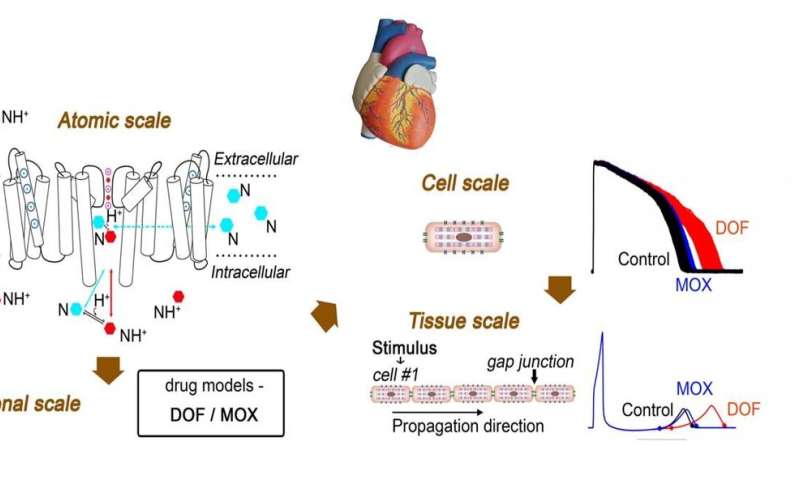 Death from sudden cardiac arrest makes headlines when it strikes athletes. But it also causes the most deaths by natural causes in the U.S. estimated at 325,000 per year.

The heart’s bioelectrical system goes haywire during arrest. The malfunction can send heartbeats racing out of control, cutting off blood to the body and brain. This differs from a heart attack, which is caused by a blockage of the heart’s arteries. The leading risk factors for sudden cardiac arrest are a past attack and the presence of disease. Another risk factor is the side effects from medications, which can cause deadly arrhythmias.

Using supercomputers, scientists have developed for the first time a way to screen drugs through their chemical structures for induced arrhythmias.

Up until the early 2000s, the reason most drugs were removed from the market following FDA approval was cardiotoxicity in the form of deadly arrhythmia. In 2005, the FDA required a separate test for all drugs. It measured the average time between the Q and T waves on an electrocardiogram, a record of the heartbeat. QT prolongation became a red flag for drug cardiotoxicity. But one problem is that some harmless substances, like grapefruit juice, also prolong QT interval, and using it as a proxy for heart arrhythmia could mean the loss of potentially useful and safe drugs.

“What we set out to do was to try to solve that problem by building a computer-based pipeline for screening,” said Colleen Clancy, a professor in the Department of Physiology and Membrane Biology and the Department of Pharmacology at the UC Davis School of Medicine. Clancy co-authored a study on the computational cardiotoxicity drug screening pipeline in the journal Circulation Research in April 2020.

“The major novelty of the pipeline is that we found a way to connect the atomistic scale to higher level function scales, like protein function, cell function, and in our simulated tissue-level models we can calculate the spatial and temporal gradients of electrical activity in those simulated pieces of tissue,” Clancy said. “That is an approximation of the electrocardiogram that’s measured in the clinic. We can do a direct comparison between the electrocardiogram in the simulated tissue, and electrocardiograms from patients that have taken those drugs.”

The two drugs chosen in the study both prolonged the QT interval. One of them, dofetilide, is a known proarrhythmic agent. The other, moxifloxacin, has a strong safety profile in healthy humans.

“There’s been no way to distinguish between those two classes,” Clancy said. “That’s what we were able to show in the computational pipeline.” Starting from the chemistry of the drug interactions with a target, the scientists used that information to predict proarrhythmia vulnerability through a machine learning approach based on multi-scale computer simulation data.

Clancy and colleagues chose the hERG (human Ether-à-go-go-Related Gene) potassium channel in the heart as the drug target in the first step of their computational pipeline. The hERG mediates the electrical activity of the heart, and drug companies usually screen for whether a drug blocks it.

“The big challenge computationally is the system that we studied is pretty large,” said study co-author Igor Vorobyov, an assistant professor in the Department of Physiology and Membrane Biology and the Department of Pharmacology at the UC Davis School of Medicine. “It’s on the atomistic scale. We have around 130,000 atoms in our system. This includes the hERG protein embedded in the lipid membrane surrounded in a salt aqueous solution in water.”

The calculations involved billions of individual time steps to achieve an all-atom simulation of several microseconds, enough to get detailed information on how the drug binds to the target. 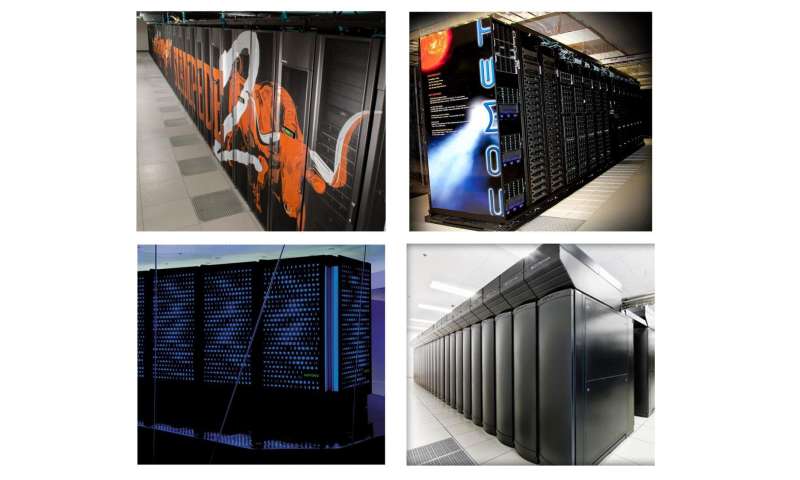 “Here is where supercomputers come in very handy,” Vorobyov said. He was awarded allocations on the Stampede2 system of the Texas Advanced Computing Center (TACC) by XSEDE, the Extreme Science and Engineering Discovery Environment funded by the National Science Foundation (NSF). XSEDE also provided supercomputing time on Comet at the San Diego Supercomputer Center, making use of Comet’s GPU and CPU nodes. The National Center for Supercomputing Applications allocated use of its NSF-funded Blue Waters system. And the scientists made use of the Anton2 system at the Pittsburgh Supercomputing Center.

“Stampede 2 offered a large array of powerful multi-core CPU nodes, which we were able to efficiently use for dozens of molecular dynamics runs we had to do in parallel. Such efficiency and scalability rivaled and even exceeded other resources we used for those simulations including even GPU equipped nodes,” Vorobyov added.

The team uses enhanced sampling simulations, called umbrella sampling, to facilitate the molecular dynamics simulations and yield quantitative determination of the binding affinities and rates of reaction needed for linking scales and feeding parameters further up the pipeline to the functional model.

“That was the novel linkage between our scales that we’ve both worked on for many years,” Clancy added. “But until now, there was no way to really connect those scales in a meaningful way.”

“This is a very novel link,” Vorobyov said, “because pretty much no one has done it before. We were able to successfully predict the outcome of the models. Just to take the parameters from the atomistic molecular dynamics simulation and predict how the cardiac cells and tissues respond to the drug application, we were able to predict the experimental prolongation of the QT interval.”

Clancy explained the key pieces of the study. “The first is connecting atomistic scale simulations to cardiac tissue simulations on the order of milliseconds, second, minutes That’s the first novelty,” she explained. “The second novelty is building a pipeline to predict cardiotoxicity, which hadn’t been done before. But the third piece is to move beyond QT interval as the surrogate, or proxy indicator for proarrhythmia.”

The researchers are taking the next steps in their computational pipeline to expand the set of drugs screened for cardiotoxicity, looking at a variety of agents that have been part of the Comprehensive In Vitro Proarrhythmia Assay (CiPA) safety pharmacology testing group. They’re also working with the biopharmaceutical company Amgen to get blinded compounds for their screening.

“The idea is that Amgen would give us the chemical structures of the drugs, but we wouldn’t know whether they were proarrhythmic or not,” Clancy said. “Then we’ll use the pipeline to make some predictions about those drugs, and send those results back where they will reveal if our model was accurate in predicting what they’ve seen.”

Clancy and team also want to move the research into a personalized medicine approach, building models of an individual’s cellular electrophysiology that include some genetic background. One project cultures heart muscle cells from individuals to develop a model called the “induced pluripotent stem cell derived cardiac myocyte.”

“The benefit of a personalized medicine approach is that it includes all of the genetic information in the background, so you can screen drugs and then start to ask, ‘Why are some individuals susceptible to drugs and proarrhythmia from drugs and other people aren’t?’ We may even be able to work towards developing reconstructions of their hearts in silico,” Clancy said.

A longtime collaborator of Clancy’s at Johns Hopkins, Natalia Trayanova, has developed high resolution three-dimensional models based on CT or MRI imaging of individual hearts. The hope is to use a finite element approach to populate the three-dimensional reconstructions with their own electrophysiology. “That’s what we’re thinking about in the next five to 10 years,” Clancy said.

In the shorter term, Vorobyov was awarded allocations in April 2020 on the NSF-funded Frontera supercomputer at TACC to scale up his calculations. “We want to test this on many more different types of drugs, including the prospective COVID-19 therapeutics. This allocation will help run many of these drugs in parallel. Frontera, on which we recently got 200,000 node hours to use as part of our LRAC award, is one of the world’s most powerful supercomputers and offers unprecedented possibilities for improving efficiency and scalability of our simulations. We will be able to run simulations for several hERG blocking drugs in parallel in a matter of few weeks, which will greatly accelerate development of our multi-scale safety pharmacology pipeline.”