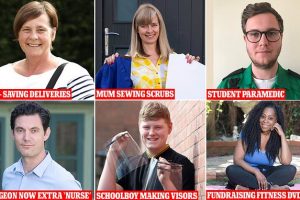 Heroes of the corona crisis: We’re all trying to do our bit to help the NHS, but as these truly inspiring stories show, there’s an unsung army of selfless people who truly are playing their part

Every day we hear remarkable stories of courage and tragedy as the coronavirus stretches the health service to the limit.

But up and down the country, ordinary people are making unsung sacrifices — big and small — to help do their bit to pull the nation, and the NHS in particular, through the crisis.

Here, we tell the uplifting stories of six people from different walks of life — from a mother sewing scrubs for doctors, to a schoolboy toiling for hours to make protective visors for health workers — who are playing their part. 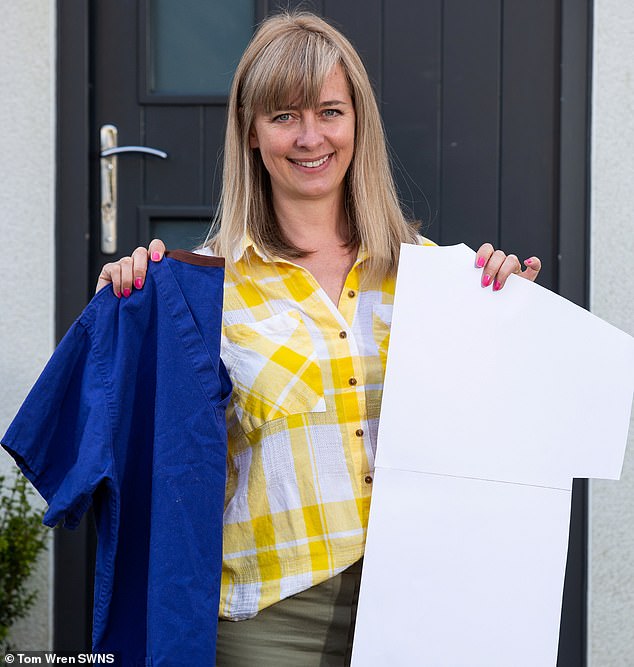 Kate Smith, 42, who lives near Bath with her husband Nigel, 42, and their daughters Lyra, ten and Florrie, seven, is now making scrubs for medics

Kate Smith, 42, lives near Bath with her husband Nigel, 42, and their daughters Lyra, ten and Florrie, seven. She runs a craft business but is now making scrubs for medics.

A few weeks ago, I was chatting with a paediatrician friend who told me that her hospital was short of scrubs because of the pandemic. I’ve always loved making things and I thought it can’t be difficult to make scrubs as they are such a simple, pyjama-style design.

Since my friend works with children, I first made some from my daughter’s old pink Hello Kitty duvet — which she tells me the patients absolutely loved.

I looked online and found lots of medics need extra scrubs because they need to change them more often since the virus crisis hit.

Obviously I couldn’t make them for everyone, but I could make some — and I could teach other people how to make them, too.

So I created a step-by-step pattern for people to make scrubs using old sheets and duvets at home — the caveat being that the material needs to be able to be washed at 60 degrees or more to kill germs, including coronavirus.

After letting people know about the pattern through my blog and social media, the response was overwhelming — so many people wanted to help. I’ve sent out more than 200 of the patterns and instructions to people around the country.

I also put out messages on social media asking healthcare workers to get in touch if they needed scrubs.

I also coordinate the various connections — introducing, say, the doctor, nurse or care worker with the person nearby who is making their scrubs for them.

Often they send me pictures of themselves working in the scrubs people have made — and I well up every time! 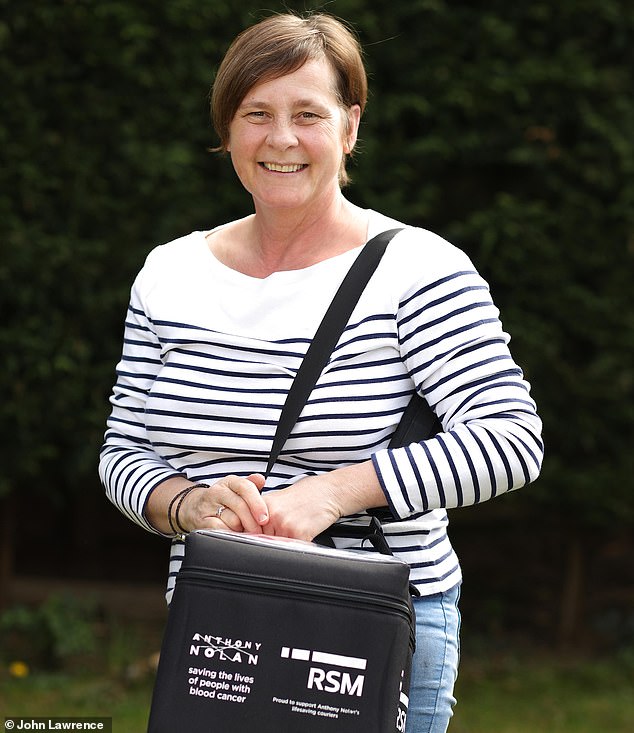 Karen Archer, 55, from Cardiff, has switched from her job as a manager for the Anthony Nolan Trust charity to work as a courier, delivering stem cells to hospitals around the UK

Karen Archer, 55, lives in Cardiff with her husband and three children. She has switched from her job as a manager for the Anthony Nolan Trust charity to work as a courier, delivering stem cells to hospitals around the UK for patients with blood cancer.

I’m on permanent standby to jump in my car and drive anywhere around the country.

Last Wednesday, I had to leave my home in Cardiff at 4.30 in the morning to get to Heathrow Airport at 7.30am to pick up some stem cells to take to Manchester Royal Infirmary, a 550-mile trip.

I finally got home at 5.30 pm. It’s exhausting, but it feels great to help out in these tricky times. For patients with blood cancer, a stem- cell transplant can be the only hope of survival.

Normally, a team of volunteer couriers fly round the world to collect the donor cells. In the UK, more than 60 per cent of transplants involve non-UK donors. However, most of our couriers are in at-risk groups and are shielding at home.

So we’ve had to employ a professional team of international couriers, but they have to hand over the stem cells at the airport. That’s where I come in.

I do three to four trips a week — and, so far, I have travelled more than 2,000 miles. I took on the role back in mid-March after getting an email from colleagues at the charity asking for volunteers.

It’s quite a change from my normal role, which involves going to universities and other places to try to get more people to join our register to donate their stem cells.

There’s a 72-hour window to get the stem cells from the donor to the patient in order for them to remain effective, so the pressure is on — but I’m enjoying doing my bit.

Surgeon is now an extra nurse 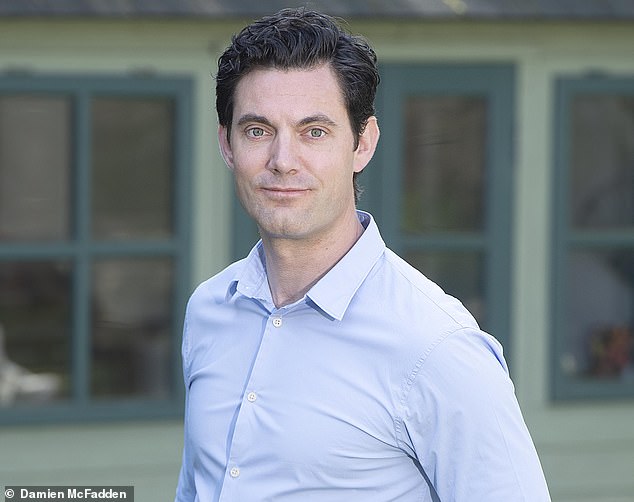 Dan Marsh, 44, from Hertfordshire, is a breast reconstructive surgeon at the Royal Free Hospital in London and Northwick Park in Harrow who is now carrying out nursing duties in the intensive care unit

Dan Marsh, 44, lives with his wife and three children in Harpenden, Herts. A breast reconstructive surgeon at the Royal Free Hospital in London and Northwick Park in Harrow, he is carrying out nursing duties in the intensive care unit.

Until a month ago, I was a consultant plastic surgeon, rebuilding breasts after mastectomies. Now, only emergency cases are being carried out as theatres are closed because all the ventilators are needed for Covid-19 patients.

This has left the surgeons under-employed, so a voluntary rota was drawn up so that we could be used where needed. I started my new role at the beginning of April after a one-hour refresher course — but even so, going into work now is extremely scary.

We meet every morning in one of the lecture theatres and roles are allocated depending on the needs for that day.

One of my tasks, with the help of five other surgeons, is to turn patients over. Some of those on ventilators need turning twice a day to open up the smaller airways in the lungs which fill up with fluid due to inflammation from the virus.

Turning patients prevents the lower parts of the lungs being permanently filled with fluid. It also helps prevent bed sores.

An anaesthetist oversees the six of us turning each patient. It’s vital none of the essential wires going into their neck, groin or chest get dislodged.

We use the ‘Cornish pasty’ method, where sheets are put over and under them. It takes about 20 minutes. I also write up patient medical notes or clean a sick patient.

In my normal role, I make the decisions: now I do whatever I’m told by intensive care doctors and nurses who are far more experienced in this setting than me.

After a shift, I take off my scrubs and protective gear, shower at the hospital and put on fresh clothes before driving home. I change and shower again before seeing my wife and children as I don’t want to bring the virus into our house. My wife is very worried for me.

There are some positives from this harrowing time. The teamwork is incredible and there’s a strong camaraderie, from surgeons to cleaners and nurses to porters.

It makes you appreciate your colleagues a lot more — especially the often less-recognised staff, such as the cleaning and catering staff who are playing such a selfless and important role. They deserve much more recognition than I do. 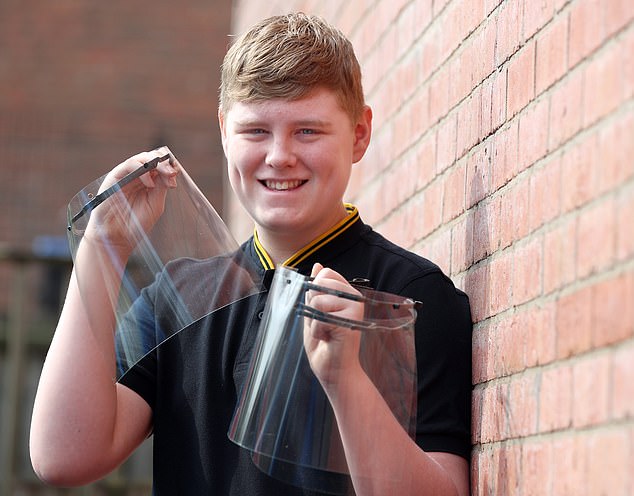 Jack Gibson, 15, from Newtownabbey, Northern Ireland, has been using a 3D printer to make protective visors for medical staff

Jack Gibson, 15, lives in Newtownabbey, Northern Ireland, with mum Nicky, 46, a sales rep. He has been using a 3D printer to make protective visors for medical staff.

I’ve had the 3D printer for about a year — I bought it online — and used it to make superhero shapes and things, but visors are more challenging.

The visor is a clear bit of plastic that clips onto a black band that fits around the hairline and over the ears. If medics wear a visor, it means their eyes are shielded from the virus so it gives more protection than a face mask.

At first, I tried to program the printer myself with the right temperatures to cut the plastic and the sizes, but I was up testing until 2am for about a week and still couldn’t get it right.

I spoke to my technology teacher who got me the computer file that gives the printer the basic ‘pattern’. I downloaded that onto a special card that I slip into the printer to preset the ‘pattern’, and my uncle gave me a roll of plastic that you put into the printer.

My school put something on its Facebook page a few weeks ago suggesting we think of ways to help people on the frontline. I got the idea for the visors after talking to my uncle, who has a 3D printer.

I’ve handed out about 30 so far. We took the first lot to the local pharmacy for the staff there, as really sick people are going in all the time and they have no protection.

I gave another batch to care assistants going into people’s homes and the next batch is going to the local hospital in Belfast, which is running low.

I’ve been offered money for the visors but I refused. I just want to do some- thing worthwhile. 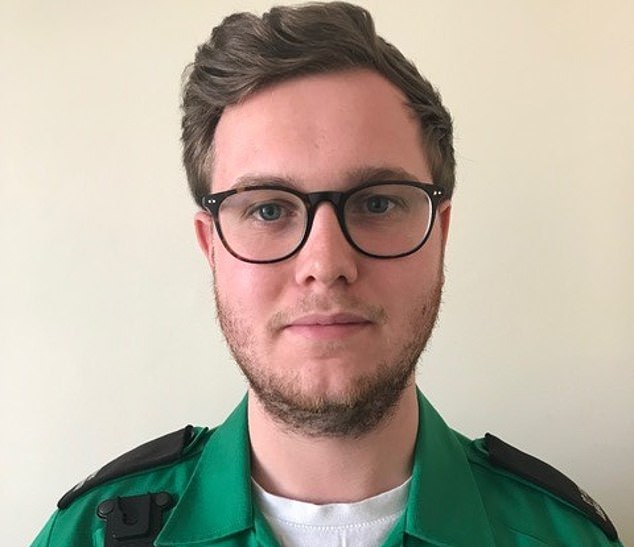 University has been cancelled due to the virus but I wanted to use this time to help support the NHS. I received an email from St John Ambulance asking for volunteers and signed up immediately. I do 12-hour night shifts up to five times a week.

We treat every callout as a possible Covid-19 case. If a patient has a cough or temperature, we wear full protection: a respirator hood, long-sleeved fluid-repellent disposable gown, eye protection and two pairs of gloves.

The kit is hot— it’s like working in a greenhouse — but there is great camaraderie among the crew. We attend many people with breathing prob- lems and serious infections and they are all fearful they have coronavirus. We try to reassure them as much as possible.

We were called to an intoxicated man on a bus the other day and when we arrived he was quite obstructive and we had to request police assistance.

When we got him to A&E, the staff recognised him and said he had previously tested positive for Covid-19. That was a shock, as he didn’t seem unwell — and had I known, I might have been far more cautious.

My parents are worried about me being exposed to the virus, but Dad is a paramedic and he knows that I will look after myself. 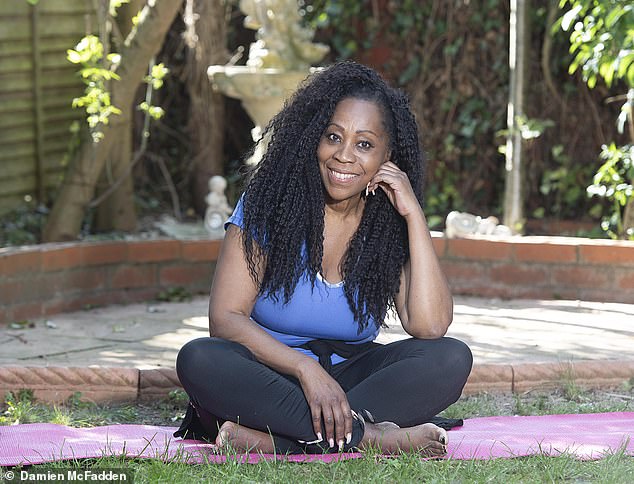 Sheyla Bonnick, who was a member of Seventies pop group Boney M, has helped create a home fitness DVD, with all profits going to the NHS

Singer Sheyla Bonnick, member of Seventies pop group Boney M, lives in Luton with husband Ingvar, a musician. Sheyla has helped create a home fitness DVD, with all profits going to the NHS.

When I saw TV reports of the chaos and panic after Covid-19 struck, I felt compelled to do something.

I had been developing the DVD with fitness instructor Maria Bajo — she does the exercises, while I re-recorded songs such as Daddy Cool to fit with them. It had been under way for some months and we were just about to release it.

But when the country went into lockdown last month and we saw how much the doctors and nurses were struggling, we decided the profits from the DVD should go to them.

I haven’t been directly affected by the virus personally, but my heart goes out to those who have been.

I have several friends and relatives who work as medics — my sister was a nurse before she retired — and I know what a tough time they’re having right now.

When this awful situation comes to an end, I’m going to do some charity gigs for the NHS, too.

Fitness To Boney M Tunes costs £12.99 and is available on amazon.co.uk