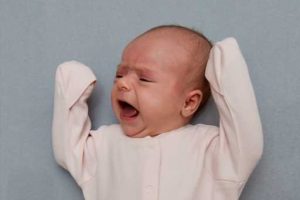 Which would you rather have: A partner who doesn’t help you care for your children, or no partner at all? This is the awful choice one new mother is facing — as many before her have faced as well — unless her husband comes to his senses and steps up with their 2-week-old daughter. Her Reddit post about the situation is equal parts infuriating and heartbreaking.

“He was great for the first four days,” creep00000 wrote in the AITA subreddit of her husband of four years. “On the fourth night, when Hannah was crying, my husband wouldn’t get up and change her diaper. He wouldn’t wake up. In my opinion, he was acting like he was asleep. I confronted him the next morning and he claimed he had no memory of it. I believe he intentionally acted like he didn’t hear me.”

Already we’re seeing red, though we’re also thinking, maybe it was an anomaly? Maybe he has a sleep issue? Um, not according to the rest of her post.

“Flash forward to day six,” she wrote. “Husband was basically playing video games all day. He changed ONE diaper.”

If dude is like this during the day too, we can see why creep00000 doesn’t believe him when he continues to say he doesn’t hear the baby OR his wife at night.

The husband is at his parents’ house, but now creep00000 (which, why that user name, lady) is doubting herself, also wondering if she was motivated by postpartum emotions. By the way, even if she is in hormonal flux, her feelings are no less valid.

Redditors are here to tell her that she’s not the asshole in this situation; her husband most definitely is.

“People in this sub use the term ‘gaslighting’ kind of frivolously, but this literally is gaslighting,” Throwaway2u39r84733 wrote. “Unless he’s suddenly become a heavier sleeper (in the course of one day), he’s making OP question if what he’s doing is really happening. This is not okay, and he either needs to accept that and work on himself, or she needs to leave him.”

While some also wondered if the husband has a sleep issue, others pointed out that his problem goes beyond the night. Creep00000 said he changes only a few diapers, holds the baby a couple of times a day, and isn’t doing any cooking or cleaning around the house. He appears to be completely unprepared to be the dad of a newborn.

Though many wanted the mom to start pouring ice water on his head or using airhorns to wake him up — if not keep him out of the house for good — there were a few commenters who suggested a more amicable way out of this.

“Has he shown other signs of mental health issues?” Aware-Definition42 asked. “Men do get postpartum depression too, and if this is out of character for him, it’s probably a good idea to have him see a doctor.”

Whether or not there are additional mental health factors at play here (on either or both sides), they need to have serious conversation about their division of labor, because childcare exhaustion does not end after the newborn phase. Couples therapy is also a great way to get this done and prevent further extremes. If not, we know plenty of parents doing excellent jobs raising kids on their own, without the added baggage of an overgrown manchild in the house.

Childbirth is nothing like in the movies, as these beautiful photos show.