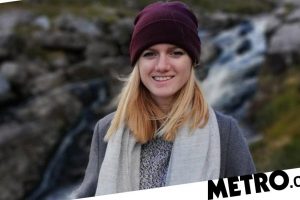 Leah Jones first became fixated on the number four on her 16th birthday, as she tapped her head four times for luck.

But over the years, her rituals around the number became unmanageable and completely controlled her life.

She said: ‘People don’t realise how difficult it is being held to ransom by your brain. That’s why I’m speaking out, to break the stereotype that OCD is all about hand washing and organised drawers.

‘That’s a big part of it, but there’s so much more to it and until we start talking about that, people are going to be suffering.’

It started around September 2010, with her 16th birthday party.

She explained. ‘I said something – I can’t even remember what – and to avoid bad luck I tapped my head four times when I couldn’t find any wood.

‘You don’t wake up one day suddenly in the throes of OCD, it creeps up on you slowly. I had a few habits like that, but for a long time they weren’t disruptive.’

But, after graduating from Royal Holloway, University of London, in Egham, Surrey, with a degree in English literature in 2016, Leah’s compulsive habits were starting to take over.

‘It began with checking the back door a certain amount of times before bed or leaving the house,’ said Leah.

‘Then it was checking the windows, which progressed to checking the oven – and on each occasion I’d have to check everything four times.

‘Before I knew it, it was taking half an hour longer to get to bed.

‘I felt very responsible for the house I lived in and my flatmate. I truly believed that not carrying out certain actions would result in something bad happening.’

She would laugh off her compulsions and she thought that her need to repeat these actions was normal.

But in July last year, during a flight back from a 10-day holiday in Whistler, Canada, she realised that she spent the entire flight tapping her chin four times, convinced the plane would crash if she stopped.

She recalled: ‘It’s not like I believed I was controlling the situation with my mind, but rather that the stakes were too high for me to stop, once the idea had entered my head.

‘I kept thinking, “What if the plane did crash and I hadn’t tapped my chin? Then it would be my fault.”

‘Looking back, I joke that no one on that flight knew that I was keeping us all airborne.’

When she landed, Leah finally admitted something was wrong.

‘I pulled up Google and every symptom checker page was saying the same thing, that it was OCD,’ she said.

A month later, she found out that her sister Alana’s partner Joe was going to ask her to marry him on holiday.

Leah said: ‘I was disgustingly happy for them, but when they set off for the holiday my mind went into overdrive. I got up to go to the toilet one night and that was it – I had to go three more times, to total the number four.

‘I truly made myself believe that if I didn’t, she’d end up dead before he proposed.’

In the morning, Leah finally decided to ask for help and referred herself to her local mental health services and was put on the waiting list to receive cognitive behavioural therapy (CBT) – a talking therapy that helps manage problems by changing the way people think and behave.

In September 2019, Leah saw a mental health professional and opened up about her obsessional behaviour for the first time.

‘I’d never spoken about all these intrusive thoughts and compulsions before,’ she said.

‘I cried so badly, properly opening up like that.’

Told she was displaying all the signs of OCD, she was referred for 12 CBT sessions, lasting 50 minutes each.

‘It’s nothing like sitting on a couch and discussing past memories,’ she said.

‘In the sessions we talk through my compulsions and have made a map of my OCD behaviour.

‘My compulsions are very much based on feeling responsible for other people’s health, wellbeing and happiness.

‘I have to bring thoughts like, “This person is going to die,” to the front of my mind, without carrying out the compulsive actions.

‘The idea is to realise that my thoughts aren’t going to make it happen.

‘It sounds easy, but it’s very hard to unlearn all this behaviour.’

Leah is speaking out to help highlight the complexity of her condition.

She concluded: ‘People think OCD is just about being obsessed with hygiene and germs, but there’s so much more to it than that.

‘When I tell people I have OCD, I add, ‘Not the cleaning kind!’

‘And I want to change people’s perception, so they realise that this condition is about so much more.’