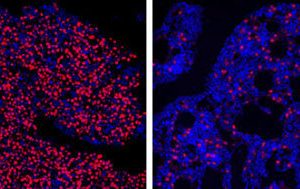 doxycycline daily amount and the right image represents the same for a myeloma-bearing mouse treated with the antisense oligonucleotide ION251, an experimental therapeutic. The red dots represent the IRF4 protein within human myeloma cells, which are much sparser after ION251 treatment. Credit: UC San Diego Health Sciences” width=”600″ height=”189″>

Many patients with multiple myeloma, a type of blood cancer, eventually develop resistance to one treatment after another. That’s in part because cancer stem cells drive the disease—cells that continually self-renew. If a therapy can’t completely destroy these malignant stem cells, the cancer is likely to keep coming back.

Researchers at University of California San Diego School of Medicine and Ionis Pharmaceuticals are taking a new, targeted approach to myeloma treatment—silencing IRF4, a gene that allows myeloma stem cells and tumor cells to proliferate and survive. Past studies have shown that high IRF4 levels are associated with lower overall survival rates for patients with the disease.

In a study published January 20, 2021 in Cell Stem Cell, the team details their successes inhibiting IRF4 with an antisense oligonucleotide, an engineered piece of DNA specifically designed to bind the genetic material coding for IRF4, causing it to degrade. The oligonucleotide—an investigational antisense medicine developed by Ionis and known as ION251—lowered disease burden, reduced myeloma stem cell abundance and increased survival of mice bearing human myeloma, according to preclinical study data.

Authors say the results support a Phase I clinical trial recently launched to assess the safety and efficacy of ION251 to treat humans with myeloma.

“As scientists, we don’t usually have direct contact with patients, as a daily reminder of what our research could do, or why it’s important,” said co-senior author Leslie Crews, Ph.D., assistant professor in the Division of Regenerative Medicine at UC San Diego School of Medicine. “But I’ve been working with a local support group for patients with multiple myeloma. They inspire me. They ask the most insightful questions, and it really makes it personal. I hope this work will eventually give them new potential treatments to prevent relapse, and ultimately get better.”

UC San Diego School of Medicine and Ionis Pharmaceuticals have a long history of collaborating on the development of investigational antisense medicines. Several Ionis antisense drugs have been commercially approved, including the U.S. Food and Drug Administration (FDA)-approved SPINRAZA, a therapy for spinal muscular atrophy. In addition, several other therapies are currently in clinical trials.

One challenge myeloma researchers face is that myeloma cells don’t grow well in laboratory dishes. To study the disease and test new treatments, the best method, Crews said, is to transplant human myeloma cells into mice that lack an immune system and thus won’t reject the human cells—making avatars of each unique patient, in a way.

The team tested ION251 on these myeloma mouse avatars. Compared to untreated mice, the treated mice had significantly fewer myeloma cells after two to six weeks of treatment. What’s more, 70 to 100 percent of the treated mice survived, whereas none of the untreated control mice did. There were 10 mice in each treatment or control group and they received daily doses of ION251 or a control for one week, followed by three doses per week.

“The results of these preclinical studies were so striking that half the microscopy images we took to compare bone marrow samples between treated and untreated mice kept coming back blank—in the treated mice, we couldn’t find any myeloma cells left for us to study,” said Crews, who is also associate member of the Moores Cancer Center and member of the Altman Clinical and Translational Research Institute at UC San Diego. “It makes the science more difficult, but it gives me hope for patients.”

In addition to working on its own, the treatment improved myeloma tumor cell sensitivity to standard-of-care cancer therapeutics. The researchers also drilled down to the mechanisms at play and described the molecular effects of IRF4 inhibition—information that both clarifies how myeloma forms in the first place, and how the treatment works.

The Phase I clinical trial to assess the safety of ION251, sponsored by Ionis Pharmaceuticals, is now recruiting participants at Moores Cancer Center at UC San Diego Health and elsewhere. More information is available at clinicaltrials.gov/ct2/show/NCT04398485.