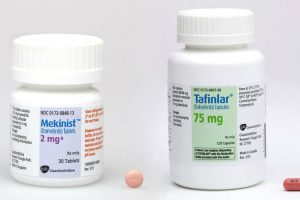 The US Food and Drug Administration has granted accelerated approval to dabrafenib (Tafinlar) plus trametinib (Mekinist) for adult and pediatric patients aged 6 years and older with unresectable or metastatic solid tumors with the BRAF V600E mutation whose disease has progressed following prior treatment and who have no satisfactory alternative treatment options.

The combination represents “the first and only BRAF/MEK inhibitor to be approved with a tumor-agnostic indication for solid tumors carrying the BRAF V600E mutation, which drives tumor growth in more than 20 different tumor types, and it is the only BRAF/MEK inhibitor approved for use in pediatric patients,” drugmaker Novartis said in a press release.

The new approval was based on two adult trials and one pediatric trial that showed an overall response benefit for patients with high- and low-grade gliomas, biliary tract cancers, and certain gynecologic and gastrointestinal cancers.

The pediatric approval was based on an efficacy assessment involving 48 patients. Among the 36 with gliomas, the overall response rate was 25%, according to labeling.

Investigator Vivek Subbiah, MD, a pediatric oncologist at Anderson Cancer Center, Houston, Texas, said in a press release that given the emerging importance of BRAF mutations in cancer, “physicians should consider a BRAF test as a routine diagnostic step that could enable a new option for treating patients with many solid tumors.”

Labeling warns of adverse events, including hemorrhage and gastrointestinal perforation, as well as ocular and skin toxicity.

M. Alexander Otto is a physician assistant with a master’s degree in medical science and a journalism degree from Newhouse. He is an award-winning medical journalist who has worked for several major news outlets before joining Medscape and also an MIT Knight Science Journalism fellow. Email: [email protected]