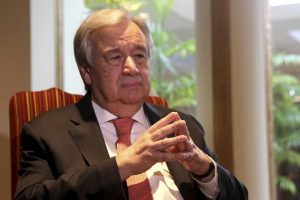 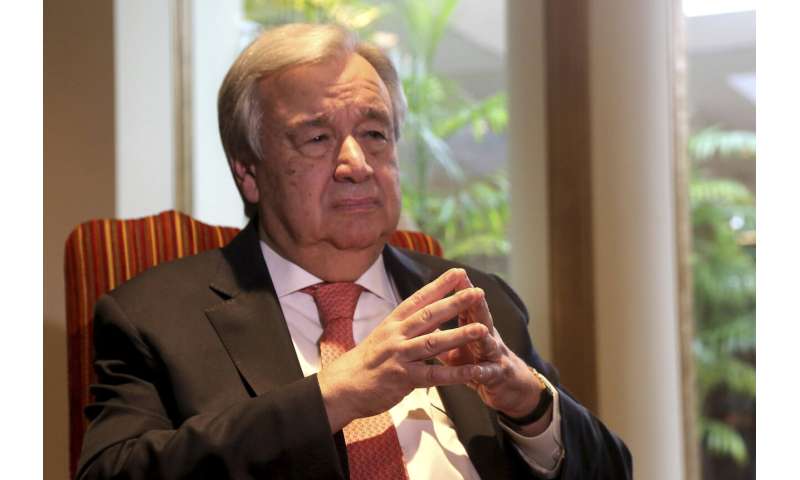 The U.N. secretary general said Tuesday that the virus outbreak that began in China poses “a very dangerous situation” for the world, but “is not out of control.”

Speaking in an interview with The Associated Press, Antonio Guterres said that “the risks are enormous and we need to be prepared worldwide for that.”

Guterres said his greatest worry was a spread of the virus to areas with “less capacity in their health service,” particularly some African countries. The World Health Organization is looking into how to help handle such a development, he added.

Egypt recently reported its first case of the virus, raising fears of its spread to the African continent.

The outbreak has infected more than 73,000 people globally. The World Health Organization has named the illness COVID-19, referring to its origin late last year and the coronavirus that causes it.

China on Tuesday reported 1,886 new cases and 98 more deaths. That raised the number of deaths in mainland China to 1,868 and the total number of confirmed cases to 72,436.

Travel to and from the worst-hit central China region was associated with the initial cases of COVID-19 confirmed abroad. But Japan, Singapore and South Korea have identified new cases without clear ties to China or previously known patients, raising concern of the virus spreading locally.

A report saying the disease outbreak has caused a mild illness in most people raised optimism among global health authorities. 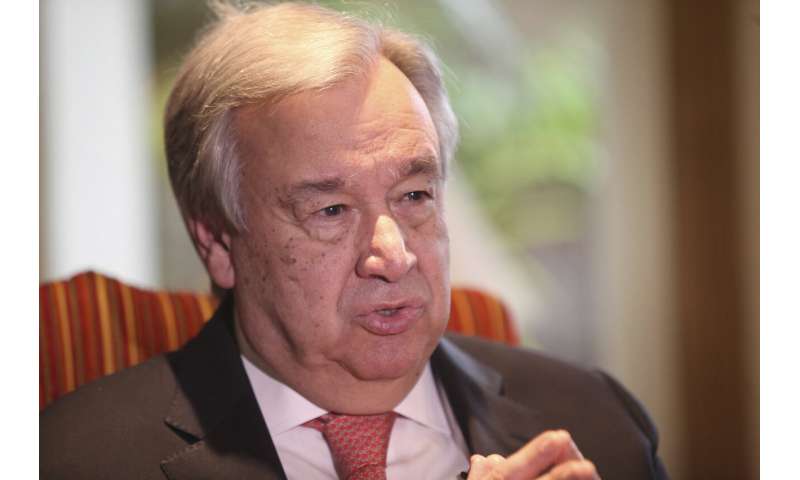 The U.N. chief was in Pakistan for a conference on 40 years of refugees fleeing neighboring war-torn Afghanistan.

In his interview with the AP, Guterres said that today’s world is a “chaotic” one beset by multiple crises.

He decried the horrors of Syria’s nine-year-old civil war. The U.N. humanitarian chief Mark Lowcock has warned that the most recent exodus of refugees there—nearing 900,000 people fleeing fighting in the northwest Idlib region—risks being the biggest humanitarian disaster of the 21st century.

Syrian President Bashar Assad has, however, vowed to fight rebels in the country to the bitter end. Backed by Iran and Russia, his forces are making rapid progress against the last rebel-held enclaves in northern Syria. Turkey backs opposition fighters there and has sent troops in to try stopping the Syrian advance.

Some 3 million Syrian civilians are sheltering in those last rebel-held areas and many of them have been forced out into make-shift shelters and camps amid harsh winter conditions.

The suffering of Syrians is “horrible,” Guterres said. He called for an immediate cease-fire, urging Turkey, Russia and Iran to find a political solution.

Turning to the Libyan civil war, Guterres bemoaned the blatant violations of a U.N.-imposed arms embargo on the North African country.

Foreign powers have intervened in oil-rich Libya’s conflict, apparently jockeying for control over its resources while supporting its rival west- and east-based leaders. 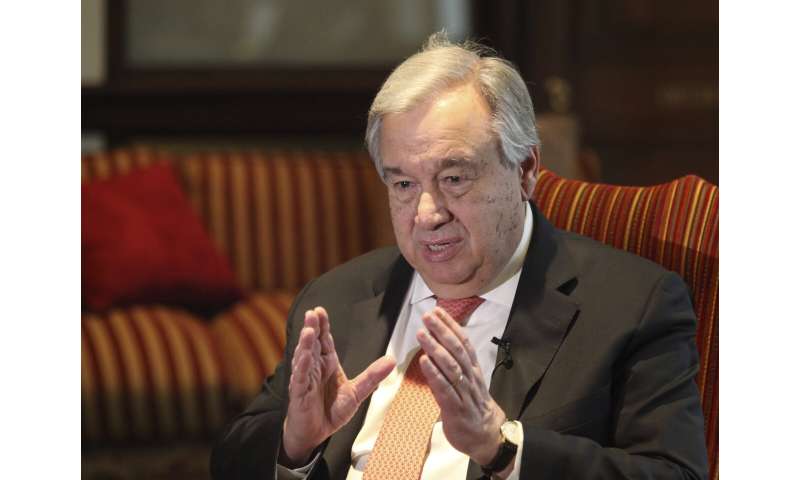 “How many countries in Libya are interfering with the conflict and independent of an arms embargo, decided by the Security Council, they go on providing both personnel and equipment to Libya?” he asked.

Western Libyan forces rely on military assistance from the United Arab Emirates and Egypt, as well as France and Russia. On the other side, Turkey, Italy and Qatar support the embattled Tripoli-based government in the country’s east.

The U.N. chief put some of the blame for the state of world affairs on the three leading powers, the United States, Russia and China, calling their relationship “dysfunctional.” He said it has paralyzed the U.N. Security Council.

“It is clear that we live in the moment where chaos risks to transform our world in something much more unstable,” he said.

The U.N. leader, however, said U.S.-Taliban peace talks presented a chance for ending one of the world’s longest running conflicts, in Afghanistan.

“We absolutely need to seize this opportunity for peace,” Guterres said. Millions of Afghans are still living as refugees, he pointed out.

The second half of the peace deal between the U.S. and Taliban is expected to be signed on Feb. 29. It calls for Afghans on both sides of the conflict to begin negotiations over the country’s post-war future. Until now, the Taliban have refused direct talks with the Afghan government.