An artificial ‘virus’ that burrows through the walls of bacteria without being spotted by the immune system has been created to fight superbugs.

Antibiotic resistance is considered to be one of the biggest threats facing humanity, alongside climate change and terrorism.

Viruses are like ‘solid cages’ built from tiny blocks, with their shape determining their function.

Experts took the shape and used it as a ‘scaffold’ to place elements based on those already used in our immune systems to recognise pathogens.

Tests on cells in the laboratory – and on moths – showed the virus inflicted ‘rapid and irreparable damage to bacteria’. 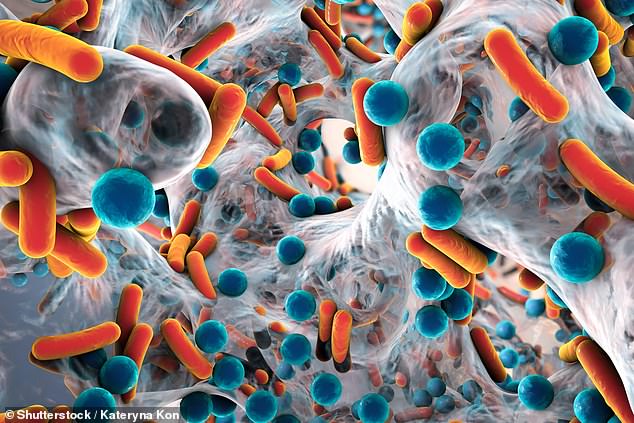 An artificial ‘virus’ has been created to burrow through the walls of bacteria and defeat infection, in a breakthrough which could help to tackle superbugs (stock image)

Researchers at the National Physical Laboratory in London said the breakthrough was ‘extremely exciting’.

Dr Maxim Ryadnov and his team hope the new viruses could be tested on humans in three years.

Antibiotics kill bacteria or prevent them from spreading. They can generally be put into six groups – these include penicillins and cephalosporins.

WHAT IS ANTIBIOTIC RESISTANCE?

Antibiotics have been doled out unnecessarily by GPs and hospital staff for decades, fueling once harmless bacteria to become superbugs.

The World Health Organization (WHO) has previously warned if nothing is done the world is heading for a ‘post-antibiotic’ era.

It claimed common infections, such as chlamydia, will become killers without immediate solutions to the growing crisis.

Bacteria can become drug resistant when people take incorrect doses of antibiotics or if they are given out unnecessarily.

Former chief medical officer Dame Sally Davies claimed in 2016 that the threat of antibiotic resistance is as severe as terrorism.

Figures estimate that superbugs will kill 10 million people each year by 2050, with patients succumbing to once harmless bugs.

Around 700,000 people already die yearly due to drug-resistant infections including tuberculosis (TB), HIV and malaria across the world.

Concerns have repeatedly been raised that medicine will be taken back to the ‘dark ages’ if antibiotics are rendered ineffective in the coming years.

In addition to existing drugs becoming less effective, there have only been one or two new antibiotics developed in the last 30 years.

In September, the WHO warned antibiotics are ‘running out’ as a report found a ‘serious lack’ of new drugs in the development pipeline.

Without antibiotics, C-sections, cancer treatments and hip replacements will become incredibly ‘risky’, it was said at the time.

But the researchers explained that a normal antibiotic only has one ‘target’ on a bacterium.

This means that all that is needed for a bug to become resistant to it and render treatment ineffective is for it to change just one gene.

But the new research from Dr Ryadnov and his colleagues could provide a new weapon in the fight against superbugs.

Existing cells in the body, such as blood cells, are neutrally charged, whereas bacteria are negatively charged.

But the scientists developed the virus to be positively charged, allowing it to seek out the bacteria.

They then engineered the virus to be invisible to the body’s own immune system so that it did not destroy it inadvertently. HOW IS IT INVISIBLE?

Dr Ryadnov told The Times: ‘This means they are almost invisible to the body, like a phantom that is drawn to bacteria.’

In a paper in the journal ACS Nano, Dr Ryadnov and his team showed that their new virus inflicted ‘rapid and irreparable damage to bacterial cells’.

She told The Times: ‘The paper describes a wonderful combination of skills: understanding of protein structure and the physics of protein assembly, biology of bacteria and viruses, computational simulations and characterisation techniques from physics and biology.’

‘This work shows clearly the future of medicine, getting inspiration from the strategies produced by evolution to overcome a medical problem and engineering a new version of those strategies at the nanoscale using techniques and expertise across disciplines.’

Around 700,000 people already die yearly due to drug-resistant infections – but it is estimated this will dramatically increase in the next few decades.

Bacteria can become drug resistant when people take incorrect doses of antibiotics, or they are given out unnecessarily.

Figures estimate that superbugs will kill ten million people each year by 2050, with patients succumbing to once harmless bugs.