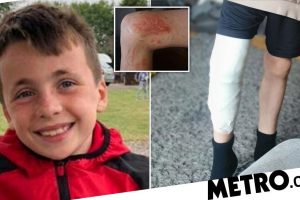 A mum has issued a warning after her son received horrific third-degree burns from hogweed – a parsley-like plant with thick bristly stems.

Jayden Bird, nine, rubbed his leg against the weed, which is thriving thanks to lockdown.

He was playing with his siblings while on a camping holiday with his family when he ran past a patch of hogweed near some trees on the campsite.

Within minutes his right leg was covered in red marks – and sixteen hours later they erupted into puss-filled blisters leaving him in agony.

Doctors said the third-degree burns will leave scars, which could last a number of years, and little Jayden said he doesn’t want to wear shorts outside anymore.

The recent hot weather has created ideal conditions for hogweed to grow across Britain – with lockdown making it increasingly difficult to keep under control.

The weed’s harmful sap can have agonising effects if it comes into contact with human skin, causing painful burns and blisters, and life-long scars.

Jayden’s mum Carly, 31, wants to warn other parents to keep an eye out for the plant which, she says, looks ‘quite attractive’ to the untrained eye.

The careworker from Warwickshire said: ‘The poor boy, the blisters are so big and look so sore, I am just so glad that none of my other children were hurt from this horrid plant, Jayden has suffered enough.

‘It doesn’t look like a nasty plant – it looks quite attractive.

‘It’s not a surprise that kids would naturally go up to it without knowing it’s the UK’s most poisonous plant.

‘He’s lucky it didn’t go on his face as if it had gone in his eye he would have gone blind.’

Jayden and his family were camping at Bosworth Water Trust in Nuneaton, Warwickshire, when he was stung.

He was playing with other children near trees and brushed the plant for a few seconds while he ran past.

It was immediately itchy and sore, but hour by hour the rash grew larger, until huge blisters appeared.

Not realising it was hogweed, they drove home and then took Jayden to the George Eliot Hospital in Nuneaton.

Medics said it was a third degree burn from hogweed, and covered the burns in bandages.

They gave him antibiotics, painkillers and cream.

According to the NHS website hogweed looks like ‘innocuous cow parsley with white flowers clustered in an umbrella-shaped head that is up to 80cm in diameter’.

Dubbed ‘Britain’s most dangerous plant’ hogweed can grow up to five metres tall.

A mild winter, sunny days and lots of rain has created ideal conditions for the plant, and specialists have been less able to tackle it due to lockdown.

Bosworth Water Trust campsite has been approached for comment.

Do you have a story you want to share?