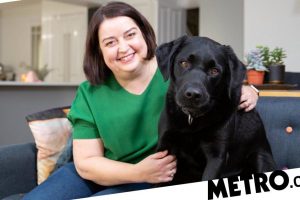 You Don’t Look Sick is our weekly series, discussing invisible illness and living with a condition that other people can’t see.

This week, we’re talking to Jane Edwards, 45, from Stamford, Lincolnshire, who has a rare autoimmune disease called vasculitis, which means that her immune system attacks her blood vessels and causes inflammation.

The communications manager has two types of the disease. The first is granulomatosis with polyangiitis (GPA), which affects her small blood vessels. This has left lasting damage on her kidneys, eyes, nose and ears.

The second is large vessel vasculitis, which has caused inflammation in the main aortic arch straight out of her heart.

Jane, who is author of Chronic Illness: Learning to Live Behind My Smile, tells Metro.co.uk: ‘There is no cure for vasculitis, we live in the hope of a drug-free remission, but this is often difficult to achieve, I haven’t reached this nirvana in eight years.

‘I describe the illness to my children as a volcano, sometimes quiet, sometimes erupting, explaining that the eruption could be a small gurgle or a life-changing blast. All explosions leave damage in their wake.’

She was diagnosed eight years ago but had been experiencing symptoms for around three years before she finally got answers.

She adds: ‘The symptoms of vasculitis can be vague to begin with and I am not sure when the disease started, but I believe it was at least three years of visiting doctors with random symptoms before any sign of diagnosis.

‘I had been told I had pneumonia, migraines and just the “after-effects of having children”.’

The turning point came when Jane developed a tooth infection and no matter what her dentist did, it wouldn’t go away.

She adds: ‘The dentist removed all four wisdom teeth, but still, the infection continued. After my third set of antibiotics, he said: “There is something not right, you need to see your doctor”. So, I did, but the answers were not quick.

‘I had just started a new job and was away on induction training. I was sweating all day and trying to sneak off to bed about 7 pm and avoid the meals out and drinking. I felt terrible but kept pretending all was fine.

‘The GP did some blood tests and they showed inflammation and signs of infection. The GP told me it probably wasn’t anything serious, but because I had private medical insurance, we could refer me to a ‘general consultant’ to review my history.

‘I never made the private appointment; instead one day I couldn’t walk up four steps, just total exhaustion. I had lots of blood in my nose, and I was covered in sweat. I was admitted to hospital as an emergency.’

Jane was in hospital for two weeks, where they carried out blood tests, scans and a kidney biopsy to try to find answers.

‘It was an extremely painful and worrying process, and there were moments when I thought they wouldn’t find a specific reason for the way I felt,’ she says.

‘Eventually, fluid was identified around my heart. Nearly half a litre of fluid was taken away, and this finally allowed my heart to start beating loudly, the difference it made was astonishing. I thought this must be the solution.

‘Unfortunately, this was a side effect, not a cause. When the mystery was finally solved, the doctor told me about my rare disease which had been identified from the kidney biopsy.

‘I was so relieved that I could identify a cause for how I felt and so glad that I had something I could fight with enthusiasm.

‘I was given a large bag of drugs to take home, these included chemo tablets, Prednisolone (steroids), and other drugs to protect my bones and stomach. Over the years I have added to my list of pills, and now I have statins, aspirin, thyroxin and heart tablets all aimed to just keeping me moving and my blood vessels open and pushing the blood through my body.’

Jane was told that after three to six months of high dose steroids and immune suppression drugs and then she would reach remission, but after a few months, she did not feel like she was improving.

She adds: ‘My consultant said there was nothing seriously wrong and that I should get used to not always feeling right and that doctors cannot find problems for all aches. It felt like he was implying I was making it all up.

‘That was the last straw for me – I asked my GP to refer me to the Vasculitis specialised clinic in Addenbrookes hospital. On referral, Addenbrookes did many more tests, including a contrast MRI, and found that the aortic arch was inflamed by up to 8mm – a very dangerous level of inflammation.

‘I was immediately put on a clinical trial for a biological infusion called rituximab and after a few weeks, it started to work. The inflammation has reduced, but there is damage left, and the aorta is about 3-4mm thickened permanently.

‘I am so pleased I had the strength to refer myself to the experts. It is worth the extra 40 minutes journey each way. The NHS is fantastic, but it cannot treat everybody as special, you must make yourself special and fight for your own cause.’

Unfortunately, although the drugs helped, she has never reached remission or been able to reduce her dose of steroids to below 7mg.

Jane adds: ‘Eight years on and I still take between 15-20 tablets a day (plus a couple of vitamins) to control the disease. I have terrible side effects from the steroids – puffy face, weight gain, mood swings and damage creeping into my bones.

‘My reliance on steroids now may be permanent as the adrenal glands have stopped producing cortisol so I must carry injectable steroids round with me. If I cannot get my tablets down me (or I vomit), I can inject as an alternative.

‘I worry about the side effects of the steroids, so I make sure I get ‘load-bearing’ exercise every day. For me, this is generally a dog walk with my Labrador George. We go slow, and on the flat but the moving really helps me, and I understand this type of exercise helps fight the bone deterioration caused by the steroids.

‘I am instructed by my heart consultant not to do any exercise that builds pressure in my aorta, which rules out most things, I still enjoy yoga, and swimming (when the immune system isn’t strongly suppressed).’

Every day Jane suffers from severe fatigue which makes it much harder to do day-to-day things.

‘I find it hard to start anything,’ she explains. ‘If I do manage to start it, I fade so incredibly quickly and need rest. Rest and sleep do not stop the fatigue – it is not just feeling a bit tired.

‘The blood flow around my body is restricted, and this means that I really struggle to walk up any incline, not even a hill, just a gentle slope stops me in my tracks.

‘Another thing that really tires me is being with people – the noise, the focused conversations, the staying upright all leave me shouting out for a dark room with a big bed.

‘My friends now laugh when the eyes start dropping. Within five minutes, I need to excuse myself. Nights out and social events are very limited as a late-night leaves me feeling like I have drunk a bottle of vodka (even if I am drinking non-alcoholic drinks).’

Because of her condition, Jane uses the lift instead of the stairs but says that she feels like people judge her because she doesn’t look ill.

She says: ‘It is common to get dirty looks when the lifts are full, like I should be the one to get out and let others use it.

‘My daughter makes me laugh as she will then talk loudly “how are you feeling now?”.

‘The judgment of others really hurts, this can be strangers, work colleagues or friends.

‘Often people do not understand how you can do something one day, but you must cancel something the following day as you just cannot move.

‘That is the hardest thing for me, no clear positive progression of the illness, just an erratic graph going up and down but never climbing high and reaching “healthy”.’

Jane also feels that people are rude because the steroids she takes to control her condition have caused weight gain, while the immunosuppressants she needs mean that she needs to be very cautious about the risk of infection.

She says: ‘I feel I am judged to be fat and lazy as the steroid moon face makes me look enormous. It is the final insult of the disease.

‘I’m also judged for not joining in with things, like taking my daughter to children’s parties as the risk of infection is too high, or not offering to help at the school events or join in at family sports events.

‘My children have got used to mum not joining in with them, but this still hurts, I’m too fragile to play fight, run or even join in most games. However, I try and find other things to do with them and encourage them to do things without me.

‘I know people judge me or don’t believe how ill I am, but to be honest, I have concluded that after eight years of battling, it is their problem to deal with and I ignore them.’

Throughout everything, Jane has had lots of support from the Vasculitis UK team, the only charity dedicated to raising awareness of the condition.

She says: ‘They have been amazing. They are all volunteers but they are incredible.

‘The Facebook group has helped lots over the years. Vasculitis is rare, so it is often not possible to have a face to face meeting so to have an active social media group really helps.’

What are the symptoms of vasculitis?

The symptoms caused by vasculitis will depend on the organs involved. However, some general symptoms include: tiredness, weakness, loss of appetite, weight loss, and fever. Unfortunately many of these symptoms apply to other diseases which make it difficult to diagnose vasculitis.

Some symptoms encountered, specific to various systems are:

Jane also deals with her condition by writing about her experiences. At first, this was just to help her process what was happening but she decided to share what she was writing in a book called Chronic Illness: Learning to Live Behind My Smile.

She explains: ‘After going through such a long journey I thought it would be good to share what we, as a family, had learnt along the way with others, this is when it turned into a book. I self-published on Amazon. The feedback has been so positive.

‘I hadn’t imagined that the reviews and feedback would help me to deal with my problems as well as those who read it. I’m so proud that I could turn something so rubbish into a positive outcome.

‘We need to promote the fact that there are lots of illness that really affect lives, many of them are rare and only affect a few people. This means that there cannot be vast amounts of research, funding and often practical support for those patients.

‘For those of us with long term conditions that affect so much of our life, we really could do with some support for how to cope with our battles.’

How to get involved with You Don’t Look Sick

If you have an invisible illness or disability and fancy taking part, please email [email protected]

You’ll need to be happy to share pictures that show how your condition affects you, and have some time to have some pictures taken.