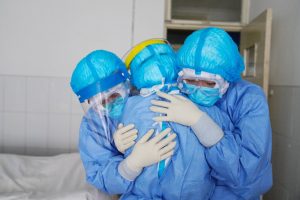 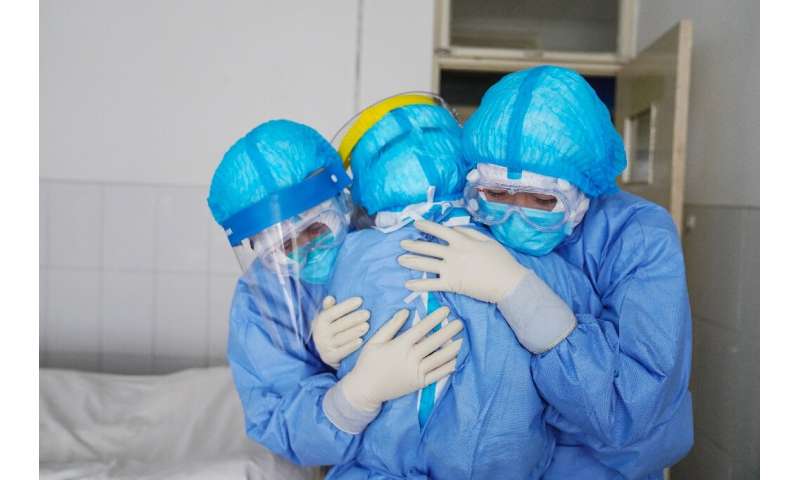 Authorities in China warned Wednesday they faced a severe shortage of hospital beds and equipment needed to treat a growing number of patients stricken by the new coronavirus, as cities far from the epicentre tightened their defences.

Central Hubei province reported 3,156 new infections, its biggest single-day jump in the outbreak that has spiralled into a global health emergency with cases reported in over 20 countries.

Among those new cases was a newborn, who was diagnosed just 30 hours after being born.

Despite authorities building a hospital from scratch and converting public buildings to accommodate thousands of extra patients, there was still a “severe” lack of beds, said Hu Lishan, an official in Wuhan, the quarantined city where the virus first appeared—and where doctors are now overwhelmed with cases.

There was also a shortage of “equipment and materials,” he told reporters, adding that officials were looking to convert other hotels and schools in the city into treatment centres.

As the number of confirmed infections nationwide exceeded 24,000, a growing number of cities have imposed a range of restrictions far from Hubei, as authorities battle to contain the virus that has killed nearly 500 people.

Millions of people, from the eastern industrial heartlands to near the northern border with Russia, have been ordered to stay indoors as authorities battle to curb the outbreak. 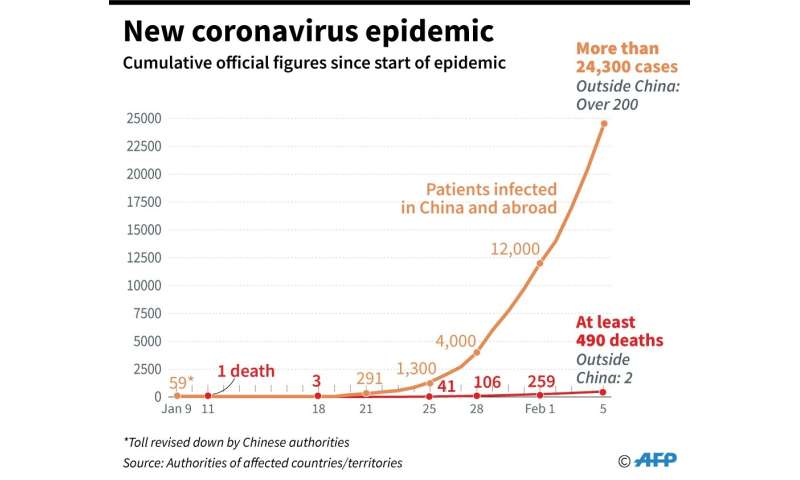 The WHO called for $675 million (613 million euros) in donations for a plan to fight the novel coronavirus, mainly through investment in countries considered particularly “at risk”.

The Bill and Melinda Gates Foundation pledged to commit up to $100 million.

New cases emerged abroad, with 10 people testing positive for the virus on a cruise ship quarantined off the coast of Japan with thousands on board.

Italy announced that passengers from every international flight would be scanned for fevers, while Vietnam, which has detected 10 cases, joined a growing list of countries banning arrivals from China.

And Hong Kong, which reported its first coronavirus death this week, said anyone arriving from the mainland will face a mandatory two-week quarantine from Saturday. 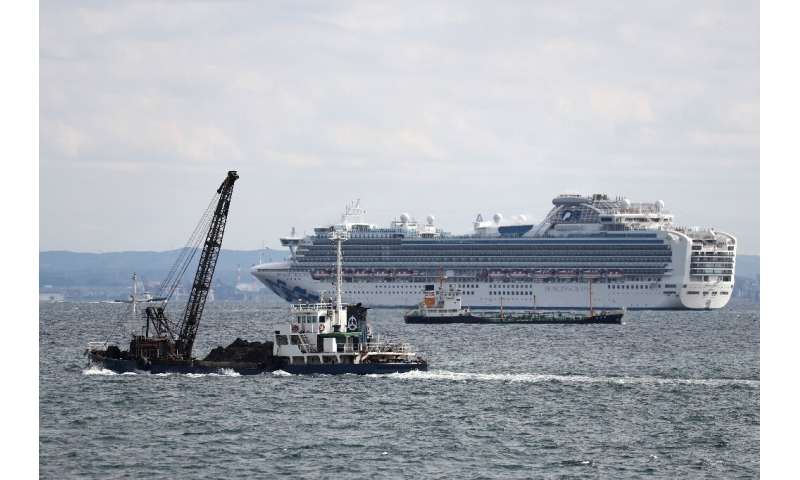 In Hangzhou, some 175 kilometres (110 miles) southwest of Shanghai, fences blocked streets near the headquarters of Chinese tech giant Alibaba—one of the world’s most valuable companies—as a fighter jet circled overhead.

The building appeared to be shut down, while deliverymen moved in and out of nearby fenced-in residential areas to drop off groceries. Many people were also seen going out.

The firm is based in one of three Hangzhou districts subject to new restrictions that allow only one person per household to go outside every two days to buy necessities.

At least three other cities in Zhejiang province—Taizhou, Wenzhou and parts of Ningbo—have imposed the same measures, affecting 18 million people. 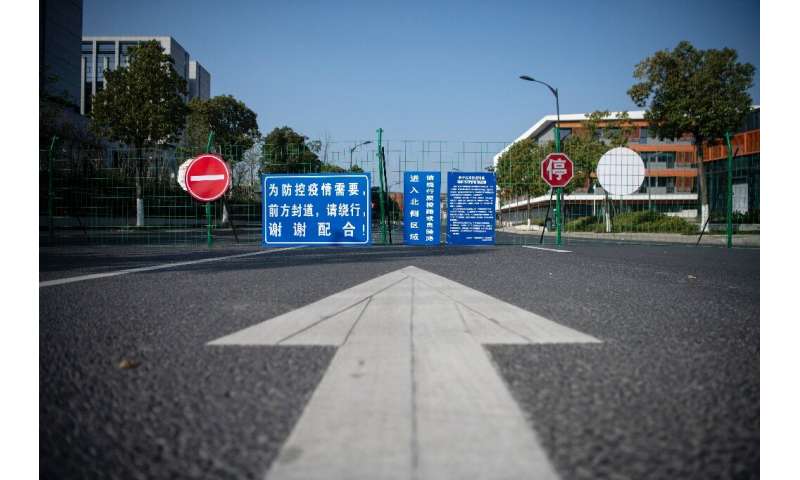 In the central city of Zhumadian, authorities said one person would be allowed to leave each household only every five days.

Residents of the city of seven million were also offered cash rewards for informing on people who came from neighbouring Hubei province.

Authorities in Beijing said restaurants could no longer accept reservations for parties from Wednesday.

The disease is believed to have emerged in December in a Wuhan market that sold wild animals, and spread rapidly as people travelled for the Lunar New Year holiday in January.

The Ministry of Public Security said “political security” was the “top priority” in confronting the epidemic.

“We should take strict precautions against and crack down on all kinds of disruptive activities by hostile forces,” security minister Zhao Kezhi said in a briefing. 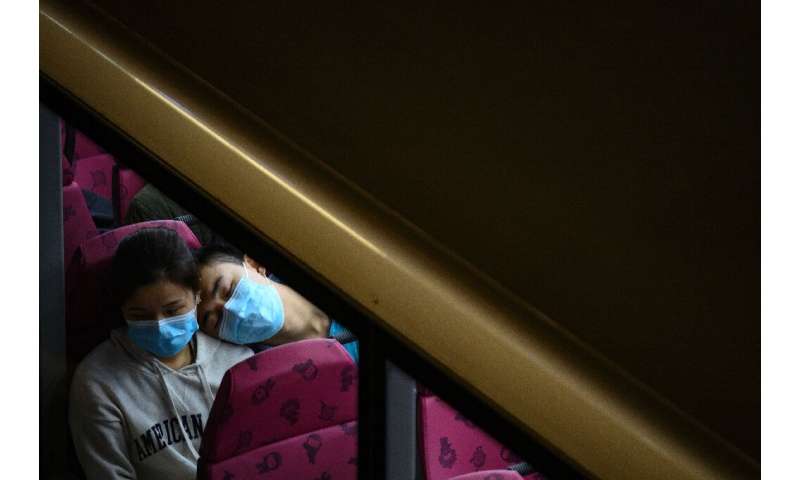 The statement came days after the top leadership admitted “shortcomings” in its handling of the outbreak—local authorities in Hubei have been criticised for initially downplaying the situation.

The death toll has steadily increased, rising to 490 in China on Wednesday.

But officials have noted that the death rate, at around two percent, is well below the mortality rate of SARS, which killed some 800 people in 2002-2003.

Two fatalities have been reported outside the mainland, in Hong Kong and the Philippines.

Several governments have imposed travel restrictions while major airlines have suspended flights to and from China.

United and American Airlines said Wednesday they have added Hong Kong to their China flight suspensions.

Thousands of Chinese tourists risked being stranded in Bali after the Indonesian government suspended flights to and from mainland China. 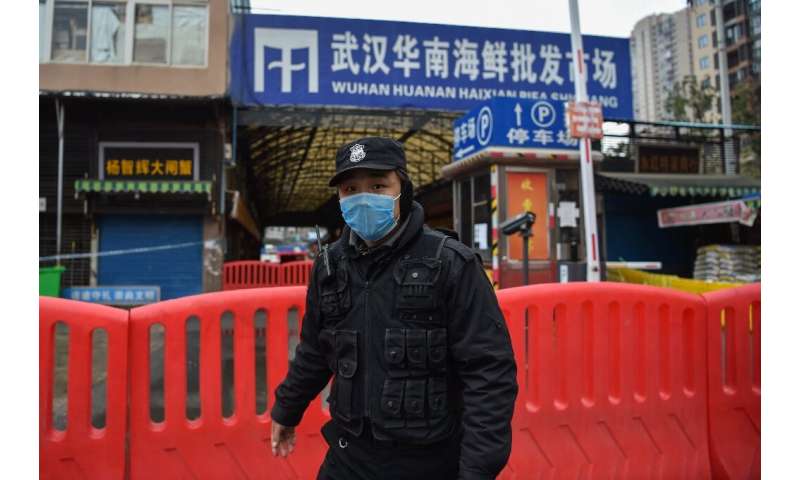 China has reacted angrily against travel bans, noting that the WHO does not advise imposing them.

It has accused the US of spreading “panic” in its response to the coronavirus, including its ban on Chinese travellers, and on Wednesday, it took another swipe at Washington.