Study: 35% of excess deaths in pandemic’s early months tied to causes other than COVID-19 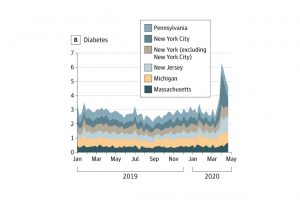 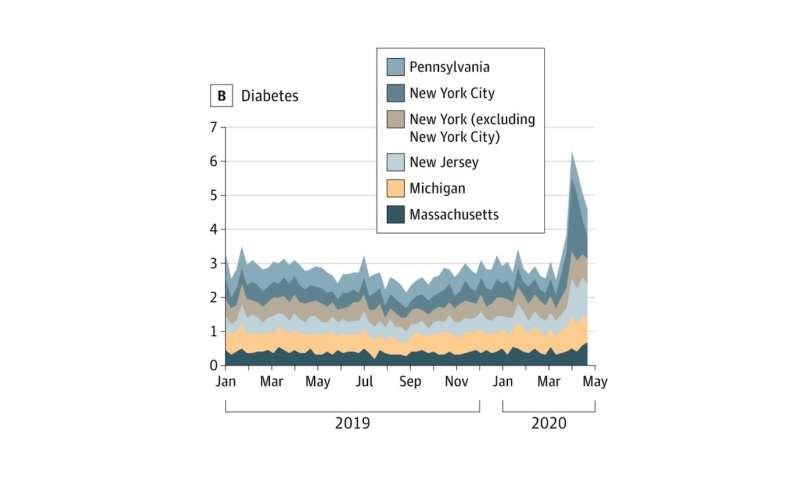 Since COVID-19’s spread to the United States earlier this year, death rates in the U.S. have risen significantly. But deaths attributed to COVID-19 only account for about two-thirds of the increase in March and April, according to a study published Wednesday in the Journal of the American Medical Association.

Researchers at Virginia Commonwealth University and Yale University found that, from March 1 to April 25, the U.S. saw 87,001 excess deaths—or deaths above the number that would be expected based on averages from the previous five years. The study, “Excess Deaths from COVID-19 and Other Causes, March-April 2020,” showed that only 65% of the excess deaths that occurred in March and April were attributed to COVID-19, meaning more than one-third were linked to other causes.

In 14 states, including two of the most populated—California and Texas—more than half of the excess deaths were tied to an underlying cause other than COVID-19, said lead author Steven Woolf, M.D., director emeritus of VCU’s Center on Society and Health.

This data, Woolf said, suggests the COVID-19 death counts reported to the public underestimate the true death toll of the pandemic in the U.S.

“There are several potential reasons for this under-count,” said Woolf, a professor in the Department of Family Medicine and Population Health at VCU School of Medicine. “Some of it may reflect under-reporting; it takes awhile for some of these data to come in. Some cases might involve patients with COVID-19 who died from related complications, such as heart disease, and those complications may have been listed as the cause of death rather than COVID-19. 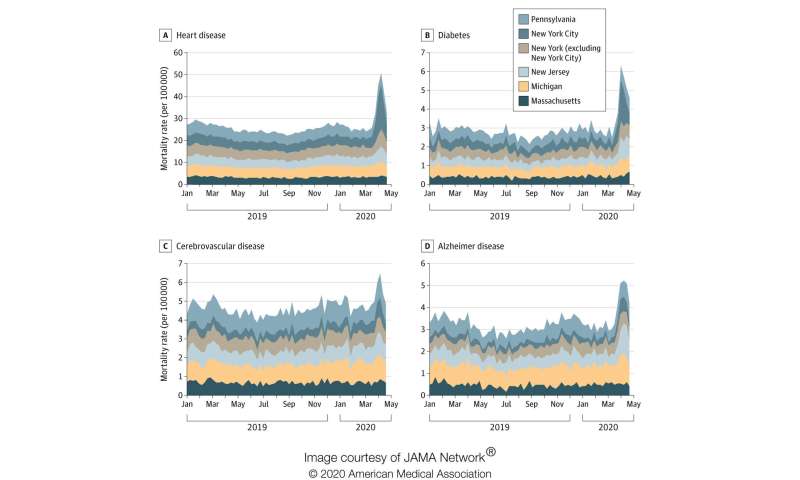 “But a third possibility, the one we’re quite concerned about, is indirect mortality—deaths caused by the response to the pandemic,” Woolf said. “People who never had the virus may have died from other causes because of the spillover effects of the pandemic, such as delayed medical care, economic hardship or emotional distress.”

Woolf and his team found that deaths from causes other than COVID-19 rose sharply in the states that had the most COVID-19 deaths in March and April. Those states were Massachusetts, Michigan, New Jersey, New York—particularly New York City—and Pennsylvania. At COVID-19’s peak for March and April (the week ending April 11), diabetes deaths in those five states rose 96% above the expected number of deaths when compared to the weekly averages in January and February of 2020. Deaths from heart disease (89%), Alzheimer’s disease (64%) and stroke (35%) in those states also spiked.

Woolf said he and his team suspect that some of these were indirect deaths from the pandemic that occurred among people with acute emergencies, such as a heart attack or stroke, who may have been afraid to go to a hospital for fear of getting the virus. Those who did seek emergency care, particularly in the areas hardest hit by the virus, may not have been able to get the treatment they needed, such as ventilator support, if the hospital was overwhelmed by the surge.

Others may have died from a chronic health condition, such as diabetes or cancer, that was exacerbated by the effects of the pandemic, said Woolf, VCU’s C. Kenneth and Dianne Wright Distinguished Chair in Population Health and Health Equity. Still others may have struggled to deal with the consequences of job loss or social isolation.

“We can’t forget about mental health,” Woolf said. “A number of people struggling with depression, addiction and very difficult economic conditions caused by lockdowns may have become increasingly desperate, and some may have died by suicide. People addicted to opioids and other drugs may have overdosed. All told, what we’re seeing is a death count well beyond what we would normally expect for this time of year, and it’s only partially explained by COVID-19.”

Woolf and his co-authors, Derek Chapman, Ph.D., Roy Sabo, Ph.D., and Latoya Hill of VCU, and Daniel M. Weinberger, Ph.D., of Yale University, state that further investigation is needed to determine just how many deaths were from COVID-19 and how many were indirect deaths “caused by disruptions in society that diminished or delayed access to health care and the social determinants of health (e.g., jobs, income, food security).”

Woolf, also a family physician, said this paper’s results underscore the need for health systems and public officials to make sure services are available not only for COVID-19 but for other health problems. His study showed what happened in the states that were overwhelmed by cases in March and April. Woolf worries that the same spikes in excess deaths may now be occurring in other states that are being overwhelmed.

“The findings from our VCU researchers’ study confirm an alarming trend across the U.S., where community members experiencing a health emergency are staying home—a decision that can have long-term, and sometimes fatal, consequences,” said Peter Buckley, M.D., interim CEO of VCU Health System and interim senior vice president of VCU Health Sciences. “Health systems nationwide need to let patients know it is safe and important to seek care in a health emergency, whether it’s through telehealth or in person.”

Woolf, who serves in a community engagement role with the C. Kenneth and Dianne Wright Center for Clinical and Translational Research, said resources should be available for those facing unemployment, loss of income and food and housing insecurity, including help with the mental health challenges, such as depression, anxiety or addiction, that these hardships could present.