The majority of women feel 'inappropriately looked at' in the gym 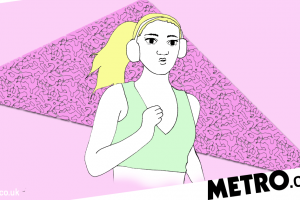 The gym can be an intimidating place for women, with many even reporting that they avoid working out altogether because of creepy, inappropriate or scary behaviour from other gym-goers.

So it isn’t surprising that three in five women say that they feel ‘inappropriately looked at’ in the gym – according to a new study.

The research, from Mindbody, shows that the majority (57%) of women have felt inappropriately looked at while they were working out. This is considerably higher than for men – only 38% say they have to endure some uncomfortable side-looks in the gym.

On top of this, 37% of women are also more likely to encounter unwanted romantic attention in the gym, such as being asked for their phone number, compared to their male counterparts (27%).

Which just isn’t what you want midway through a set of heavy squat reps.

To deal with this utterly inappropriate behaviour, women are having to hit the gym in groups or with a mate.

The report found that having a gym buddy is one of the most effective ways to increase comfort levels in a gym or fitness environment. In fact, 51% of women are taking this approach to help them to feel more comfortable in the gym.

How do women feel in the gym?

Despite a third of gym-goers saying they’re happy with their fitness environment as it is, there are some fundamental changes gym owners can make to ensure all their visitors feel more emotionally empowered.

Mindbody’s research suggests considering separate sections for men and women which would make a quarter (23%) of women feel more comfortable. An almost similar number of males (12%) and females (15%) prefer having same-sex instructors. One in ten gym-going women (11%) would feel less emotional weight if they could choose gender-separate classes.

‘One of the developments that illustrates this best is the rise of female-only classes and we’ve seen an increase in these being added to gym and studio timetables,’ says Heather Garrick, senior marketing manager for Mindbody.

‘Sometimes men don’t realise that a slight comment here and there may not seem much, but to women, it can be quite significant and potentially trigger something of deeper meaning,’ adds Stephanie Harris, personal trainer and F45 coach.

‘I think there needs to be more education around women’s training as more women enter the weight sections of the gym and want to have the confidence to do so without feeling like they are less “deserving’” of being there.’