Home » Health News » It can’t cure COVID-19, but sunlight was long seen as having healing powers

It can’t cure COVID-19, but sunlight was long seen as having healing powers 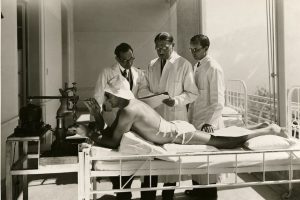 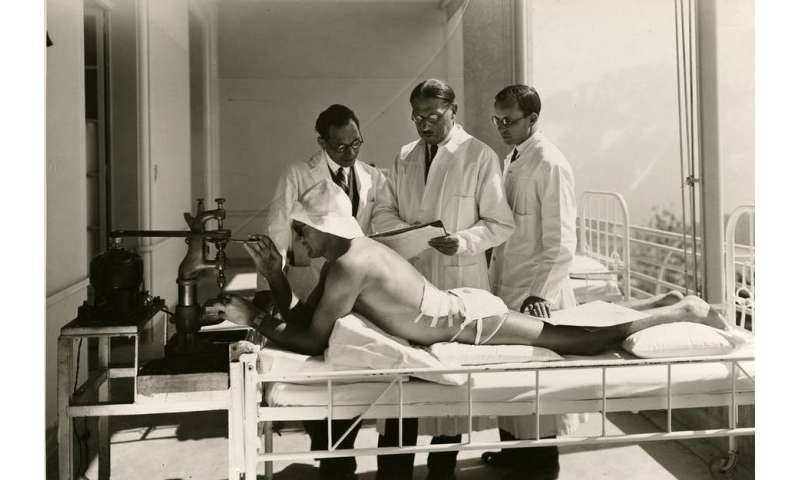 The suggestion from the US president, Donald Trump, that COVID-19 could be treated with light was rightly criticised by scientists and clinicians, but sunlight has long been seen as a cure for disease, leading to a boom in “heliotherapy” 100 years ago.

In the 19th century, when industrialisation and urbanisation had drastically reduced the amount of time people spent in the sun, concerns about the effects of lack of sunlight became widespread. In 1903, Niels Ryberg Finsen (1860–1904) earned a Nobel Prize in medicine for his pioneering work in the field of phototherapy. Light therapies that involved exposure to both natural and artificial lamps became popular, and there was a proliferation of theories about the best way to administer light.

At the same time, nudism and naturalism were gaining in popularity, and the sight of tanned skin began to be associated with health and beauty. Medical theories praised the benefits of sun exposure through the practice of taking “sunbaths”.

The Swiss doctor Auguste Rollier (1874-1954) was the most prominent sun advocate at the time. In numerous publications and at international congresses, he argued that the sun could heal a wide variety of lesions—syphilitic ulcers, all kinds of burns and fractures—as well as rickets and tuberculosis, the “white death”. Sun exposure could also have a positive effect on one’s mood and overall outlook.

But strict discipline and expert supervision were indispensable for the treatment to be effective. Rollier conceded that one could sunbathe anywhere and obtain some benefit. But he felt picking the proper climate was essential. If too hot, the sun “depresses and congests”—if too cold, it could be dangerous.

He also argued that the proper technique should be followed, and for this reason he was critical of those who attempted sunbathing without medical supervision. He decried their “snobbism”—as he saw it, they deemed it unnecessary to seek expert advice. He scorned their goal of merely “acquiring in record time a tan darker than their neighbour’s”, and emphatically listed the possible medical consequences, from erythema (redding of the skin) and sunburns, vertigo and palpitations, to lung and brain congestion.

The proper technique eliminated all barriers between the sun’s radiation and the body, and managed exposure in carefully timed increments. He used a specific chart that indicated the exact number of minutes each body part required, starting by revealing only the feet and extending the amount of the body and the length of time exposed to light with each day. All reactions, including headaches or lack of appetite, had to be carefully monitored so as to be able to adjust the therapy. Hats and sunglasses were recommended, as was moderate exercise.

By 1930, Rollier ran 37 heliotherapic clinics housing a total of 1,100 patients of all social classes. The Swiss town of Leysin where he was based became home to 80 treatment centres, hosting 3,000 patients, 50 doctors, and 300 nurses.

Before antibiotic treatments became available, time in a solar sanatorium was effective for treating tuberculosis, and the associated conditions which could develop in long-term and untreated cases. Scientists later discovered that UV rays could destroy the bacteria that caused the disease. It was also effective at curing rickets by helping the patients’ bodies develop vitamin D through sun exposure.

But heliotherapy also contributed to a much deeper holistic healing process. Rollier treated the “whole patient” (malade tout entier), paying attention to both physical and emotional health. Each person arrived with “a heart heavy with pains, preoccupations and inquietudes”. The sunlight, warmth and calm of the sanatorium may have encouraged the body to create endorphins and boosted the patient’s sense of wellbeing and positivity.

Many of his patients came from poor backgrounds and lived in very unhealthy conditions. In Leysin, some people would work in an agricultural colony or on machinery especially installed by their bed (notably at the Clinique Manufacture Internationale), where they could benefit from sun exposure while reducing the cost of their treatment. Rollier believed the “joy” of being in the open air, together with the pride and satisfaction of supporting oneself, would do much for the overall improvement of the patients’ morale, spirit and, ultimately, physical health.

Rollier’s all-encompassing approach sought to treat not just the physical but the psychospiritual aspects of the patient, without which he felt his treatments would not progress. Despite the absence of formal transcendent elements, his approach had a quasi-religious quality that sought to give life meaning, purpose and a vision to guide both present and future—an approach he felt would benefit not just individuals but the world as a whole. Rollier thought of his clinics as a forum where patients from various countries could meet and interact in a friendly environment. He saw them as a workshop to build international cooperation and peace.