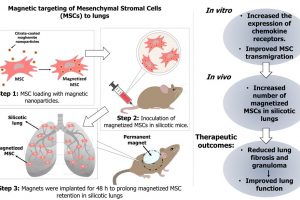 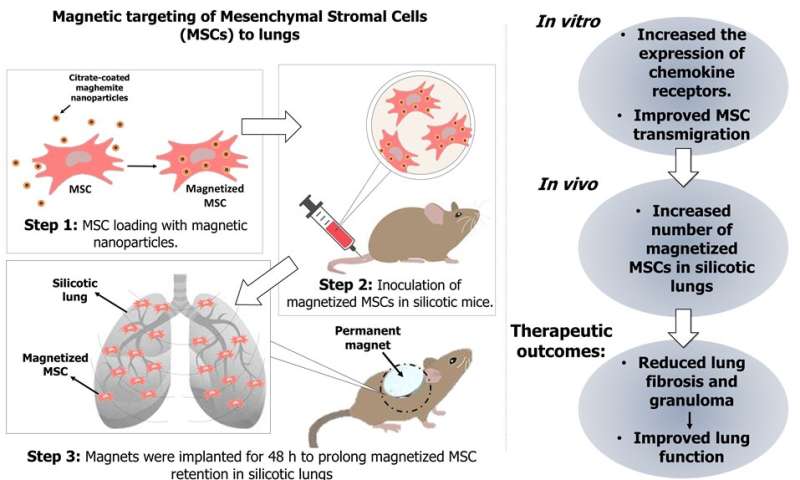 Results of a study released today in Stem Cells Translational Medicine (SCTM) may point the way to a cure for a serious lung disease called silicosis that affects millions of workers worldwide. Silicosis results from years of breathing in dust microparticles of silica by workers in professions such as construction and sand blasting. The particles can eventually lead to inflammation and scarring of the lung tissue, which in turn makes it difficult to breathe and can result in death.

There currently is no cure for silicosis, and once the damage is done it cannot be reversed. Treatment is focused on relieving symptoms and slowing down the progression of the disease, while the medical world searches for a permanent solution.

Among the more promising potential therapies are mesenchymal stem cells (MSCs), which can be programmed to become a variety of cell types depending on the conditions of the culture in which they are grown. Researchers have deliberated whether MSCs might be able to regenerate new lung cells to replace those damaged by the silica and, thus, provide a much-needed cure.

In the case of silicosis, however, MSCs have been more appreciated for their anti-inflammatory action. By minimizing lung inflammation caused by silica particles, MSC therapy potentially attenuates scarring and loss of pulmonary function. But when it comes to their efficacy in clinical trials, the results have been only modest at best.

“The reasons for this remain unclear, but one theory is that although MSCs are initially trapped in the narrow pulmonary capillaries after administration, they are cleared from the lungs within approximately 24 hours. This early clearance may explain why the MSCs’ effects are often short-lasting or not sufficient to promote improvement in the damaged lung,” said Patricia Rocco, M.D., Ph.D. She and Fernanda F. Cruz, M.D., Ph.D., both from the Laboratory of Pulmonary Investigation at Universidade Federal do Rio de Janeiro, Brazil, were senior authors on the paper published in SCTM.

Finding a way to retain the MSCs in the lungs long enough to realize a benefit was the aim of their investigation. In particular, the researchers wanted to learn whether magnetic targeting—a technique already shown to improve homing and retention of stem cells in other types of target tissues—might improve outcomes in MSC-treated silicotic mice.

They began by magnetizing MSCs (collected from mice) with superparamagnetic nanoparticles, consisting of an iron oxide (maghemite) core, coated by citrate anions. “Such nanoparticles have already been explored in targeted drug therapy and have as main advantages low toxicity to recipient cells and ease of magnetization; i.e., MSCs uptake such particles spontaneously after a 24-hour incubation period,” said Luisa Silva, Ph.D., first author on the paper.

Next, the 24 mice in the study were initially divided into a control group of six and another group of 18 in which silicosis was induced. Fifteen days later, the silicotic mice were further randomized into three equal groups. One of these groups received an intravenous administration of saline; one group was treated with magnetized MSCs; and a third group was treated with magnetized MSCs, plus each animal had a pair of magnets attached to its chest (via tape) immediately after the MSC injection. The magnets were left in place for 48 hours.

“Upon removal of the magnets, we examined all the animals in all the groups and found that those implanted with magnets had a significantly larger amount of magnetized MSCs in their lungs,” Dr. Cruz said.

In the second step of the study, the team analyzed the effects of magnetic targeting compared to treatment with non-magnetized MSCs. Seven days after the magnets were removed, the animals were assessed. Those treated with magnetized MSCs plus magnets showed significant reductions in static lung elastance, in resistive pressure and in granuloma area—all signs of lung improvement—while the mice in the other groups did not.

“This tells us that magnetic targeting may be a promising strategy for enhancing the beneficial effects of MSC-based cell therapies for silicosis and other chronic lung diseases,” Dr. Rocco said.