The reason you should never mix these cleaning products 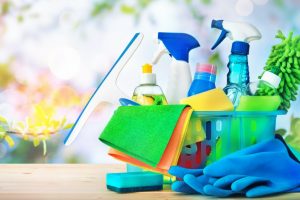 Baking soda. Bleach. Ammonia. Alcohol. Drain cleaner. Hydrogen peroxide. These products are our best defense against germs, smells, and grime — and when your house feels particularly gross to you, it wouldn’t surprise us if you are tempted to ramp up the cleaning ante by creating an extra-strength formulation. But experts say it isn’t always a good idea to put two and two together where household cleaners are concerned.

“Some people just think more product is better, but they don’t think about science and safety first. Mixing cleaning products can lead to irritated airways, respiratory problems, or burns to skin, eyes, throat, nose, and lungs. Some gases created from combined cleaning products could cause damage of the nervous system, eyes, lungs, skin, liver, kidneys, and even death,” the American Cleaning Institute’s Nancy Bock tells The Kitchn.

While bleach makes a great clothing stain remover and deals with germs like few cleaners can, it also needs to fly solo. If you mix bleach with vinegar, you end up with chlorine gas which, even in low concentrations, can trigger breathing problems. A concoction of bleach and ammonia results in chloramine, which triggers similar symptoms as bleach and vinegar — but with the addition of chest pain and shortness of breath. Bleach and alcohol literally delivers a knockout punch by creating a chloroform (via Good Housekeeping).

Vinegar is another cleaning ingredient that needs to work alone. When mixed with hydrogen peroxide, you end up with a corrosive acid that Bock says can hurt the skin, eyes, nose, throat, and lungs (via The Kitchn). Vinegar also doesn’t work too well with baking soda because putting them together — at best — results in water and sodium acetate. If stored together, the mix can also explode.

And then there is drain cleaner, which doesn’t like teaming up with another drain cleaner. “Combining drain cleaners can cause the release of chlorine gas and potentially lead to an explosion,” Bock tells The Kitchn.